The Air Pollutant Graphical Environmental Monitoring System (APGEMS) is a state-of-the-art atmospheric transport and diffusion model. APGEMS is the primary atmospheric dispersion and dose assessment model for emergency planning, preparedness, and response applications at the US Department of Energy's Hanford Site. Versions of the model are used to address a wide range of applications, including emergency response, pesticide drift, and dust dispersion. Clients include the U.S. Department of Energy, U.S. Department of Defense, U.S. Forest Service, State of Idaho, and electric power industry.

APGEMS is a PC-based tool. Its modular design allows its various components to be upgraded and replaced when appropriate. The model balances the competing needs for technical precision, speedy performance, and simplicity of use. APGEMS can be used for areas with relatively uniform terrain or complex terrain environments. Source-to-receptor transport distances can range from as little as one hundred meters to a few hundred kilometers. APGEMS uses a three-dimensional diagnostic wind model to compute the vertical and horizontal spatial variation in winds at each time step in the simulation. The wind field is determined by applying a mass-conserving interpolation technique to the surface- and upper-air observations supplied to the model. The model accounts for flow channeling, blocking by major terrain features, and drainage flows. APGEMS employs a Gaussian puff formulation to mathematically describe the concentration distribution of the released materials as they move in the mean wind field. Mathematical reflections of the concentration distribution from the ground and the top of a mixed layer modify the initial Gaussian distribution. The model treats wet and dry deposition, radioactive decay, and first-order chemical transformations of the released material.

APGEMS generates screen, hardcopy, and Internet-shareable output products. These products include plots of cumulative exposure, time-averaged concentration and total effective dose equivalent (i.e. radiological dose). Model graphics and animations are designed to efficiently convey information to hazard analysts and decision-makers. The interface with the Internet allows information to be rapidly shared with emergency response personnel within an emergency operations center and at other control centers.

For emergency response operations APGEMS can be run in three different modes: the Standard, Exercise, and Exercise Generation modes. The Standard mode is used during an actual emergency or drills that involve using real-time data. The Exercise mode is used during drills that involve "canned" meteorological data. The Exercise Generation mode is used to create the comprehensive exercise data packages (including field team monitoring readings) that are used by exercise controllers to run a training event.

In the initial stage of an emergency event, APGEMS is designed to support the needs of first responders. APGEMS rapidly generates graphical plots of the affected area and position of the effluent cloud using only the limited information generally available near the start of an event (i.e., location of the release and the start time of the release). As additional information becomes available (e.g., the type and quantity of materials released to the atmosphere, the duration of the release, the temperature of the effluent, the effective release height) the user can re-run the model and generates plots of cumulative exposure, time-averaged concentration and total effective dose equivalent (i.e. radiological dose). 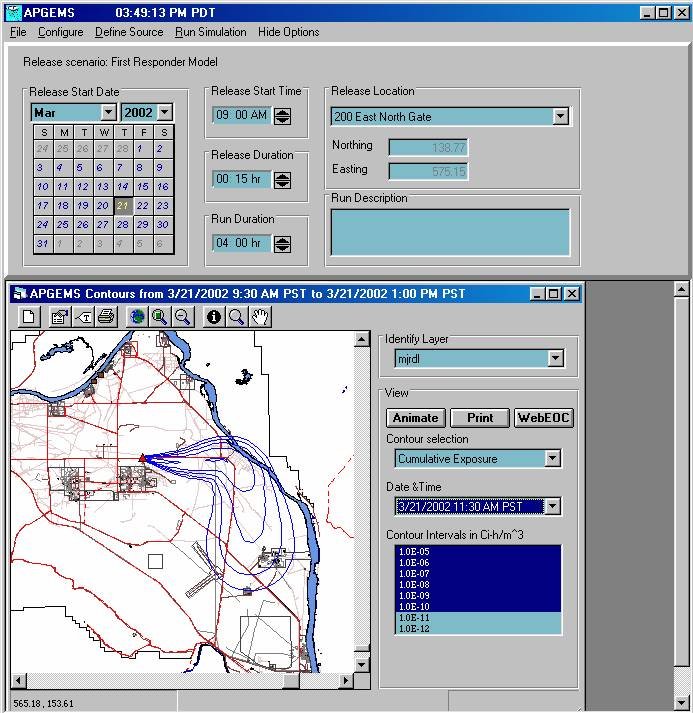 The APGEMS display allows the user to quickly set up model simulations and view model results. The above example presents the results from a Hanford Site exercise conducted on March 21, 2002. A 15-minute release started at 9 AM and the results presented show the affected area plot (i.e., cumulative exposure) at 11:30 AM. Exposure contours are unlabeled because at this point in the exercise the release source term was unknown.