The Salish Sea Model (SSM) covering the Puget Sound and Georgia Basins was developed using the Finite Volume Coastal Ocean Model (FVCOM) framework (an open source code released by UMASSD-WHOI; Chen et al. 2003). The hydrodynamic component of SSM provides year-long simulations of water-surface elevations, currents, salinity, and temperature, driven by hourly tides, daily freshwater inflows, and meteorological forcing. Tides propagate into the domain from the west through the Strait of Juan De Fuca and move north into Georgia Strait past San Juan Islands and into Puget Sound through Admiralty Inlet. More information about river inflows and meteorological inputs to the model is provided below.

For efficient year-long simulations, we have developed an intermediate-scale version of the entire domain with grid size varying from 100-350 m in estuaries and bays to as large as 800-3000 in the main basins, expanding to 3 km in the Northwest Straits to about 12 km over the continental shelf. It uses an unstructured grid with triangular elements and is well suited to accommodate complex shoreline geometry, waterways, and islands within this domain.

This scale allows sufficient resolution of the various major river estuaries and sub-basins while allowing year-long simulations within 12 hours of run time on a multiprocessor cluster computer (see Khangaonkar et al. 2017a; Khangaonkar et al. 2018). A sigma-stretched coordinate system is used in the vertical plane with 10 terrain-following sigma layers with higher layer-density near the surface. A fine-scale version with cells sides as small as 10 m is also available (see Khangaonkar and Yang 2011; Yang and Khangaonkar 2010).

Freshwater discharged to the Salish Sea Model (SSM) consists of flows from 19 major rivers (with permanent U.S. Geological Survey [USGS] gages), streamflow runoff from 45 additional watersheds, and wastewater discharges from 99 municipal and industrial outfalls. Permanent USGS gaging stations capture approximately 69% of the watershed tributary to the main study area. Hydrologic analyses were conducted using past records to estimate streamflow runoff from the remaining watersheds. This included scaling of normalized continuous records from nearby stations by watershed areas and average annual rainfalls. The flow estimates used in the Salish Sea Model were developed by the Washington State Department of Ecology and are described by Mohamedali et al. (2011).

In general, river flows in Puget Sound peak during the high-precipitation winter months of November, December, January, and February. In contrast, the Fraser River inflow on the Canadian side of the domain, which is significantly larger than the rest of the inflows into Puget Sound and the Straits combined, shows a very different seasonal distribution pattern—high flow in the late spring and summer dominated by snowmelt and low flow in the fall and winter. The figure below shows a plot of basin-wide freshwater discharges grouped by their discharge basins. The Whidbey Basin consists of the three largest rivers in Puget Sound (Skagit River, Snohomish River, and Stillaguamish River) and accounts for almost 70% of the total freshwater flow into Puget Sound. Fraser River discharges to the Georgia Basin.

Selected T and S profiles are then interpolated to the model ocean boundary in time and space, resulting in monthly OBC profiles (an example is shown below).

Meteorological parameters for calculation of net heat flux in the Salish Sea Model (SSM) include 1) downward and upward shortwave radiation, 2) downward and upward longwave radiation, 3) latent heat flux, and 4) sensible heat flux. These meteorological parameters were obtained from the weather research forecasting (WRF) model reanalysis data generated by the University of Washington. Available data were on a 12-km grid. The over-water stations are shown below along with nearshore land nodes that were identified and removed from consideration as part of QA/QC.

The Strait of Juan De Fuca, Triple Junction, and Vashon Island stations were found to best represent over-water stations, for the Puget Sound region and were least affected by albedo effects. WRF-generated net heat flux values required an adjustment (% reduction) to account for a combination of albedo over water and as part of calibration to provide the best match with observed sea-surface temperatures for the selected model surface layer thickness fraction relative to water depth. The figure below shows an example of net heat flux at the Triple Junction station that was used in model calibration based on WRF-predicted values. 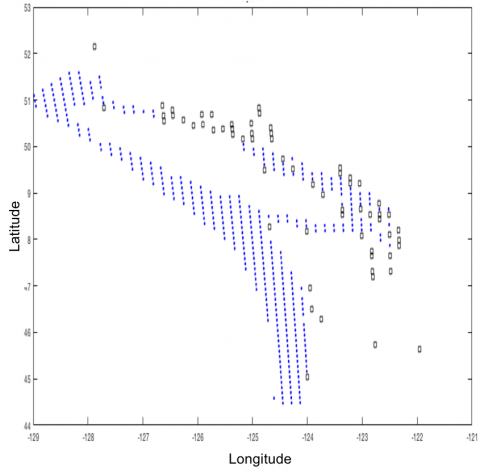 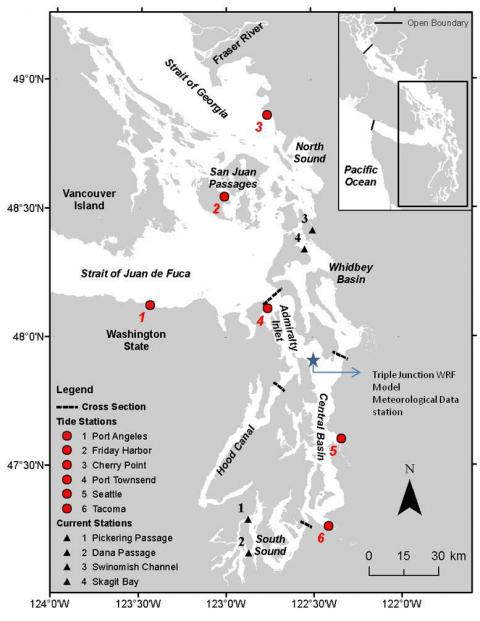 Six real-time tidal stations are maintained by the National Oceanic and Atmospheric Administration (NOAA) throughout the Straits and Puget Sound. Velocity data on the other hand are quite limited in Puget Sound as well as Georgia Basin regions of Salish Sea. Acoustic Doppler current profiler (ADCP) data in South Puget Sound (Roberts et al. 2008) as well as in Skagit Bay and Swinomish Channel (Yang and Khangaonkar 2010) were used for original model calibration. Monthly T/S profiles collected by the Washington State Department of Ecology as part of its ambient monitoring program throughout Puget Sound were also used. Hydrodynamic model calibration was conducted using Year 2006 data and has been discussed by Khangaonkar et al. (2011a) and Khangaonkar et al. (2012) and more recently in Khangaonkar et al. (2017a).

Model validation was conducted using Year 2014 data for water surface elevation, temperature and salinity using nine tide stations (X-Tide stations, Flater 1996) and the same 24 water quality stations maintained by Ecology. Relative water-surface elevation errors were less than 10% at all stations within Puget Sound in U.S. waters. Domain-wide temperature (T) RMSE was 0.76ºC with a bias of -0.27ºC. The domain-wide salinity (S) error was 0.97 ppt with a bias of -0.12 ppt. Model skill scores were also high for T and S with Wilmott Skill Score (WSS) values of 0.95 and 0.84, respectively. The Salish Sea Model validation is described in Khangaonkar et. al 2018.

The influence of the Fraser River plume on sea surface T and S is noticeable in all seasons. Furthermore, monitoring data shows that sea surface temperatures in the Strait of Georgia and Hood Canal region warm up earlier than other sub-basins and are captured well by the model.

Examples of model validation results with comparison to observed data for Year 2006 effort are shown below along with error analysis tables.

(a) Time series plots for water-surface elevation and currents. 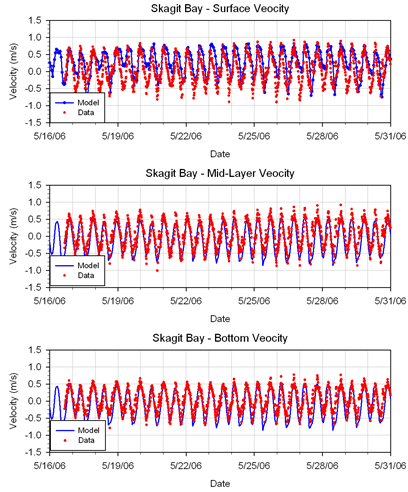 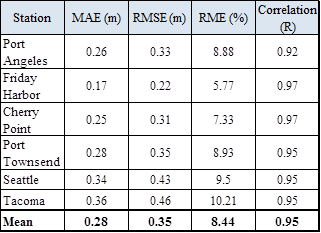 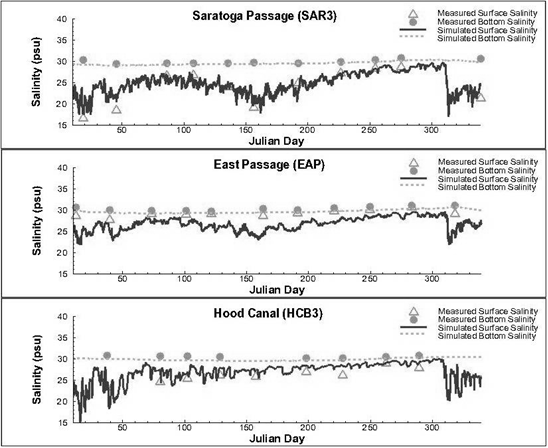 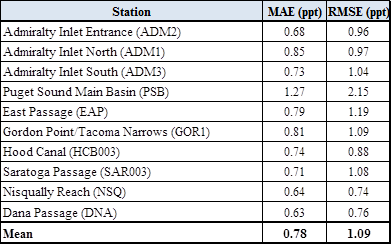 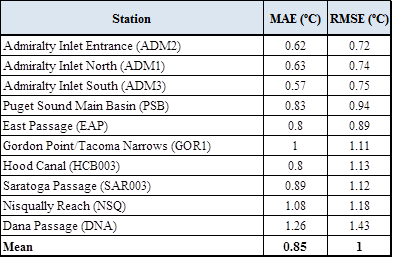