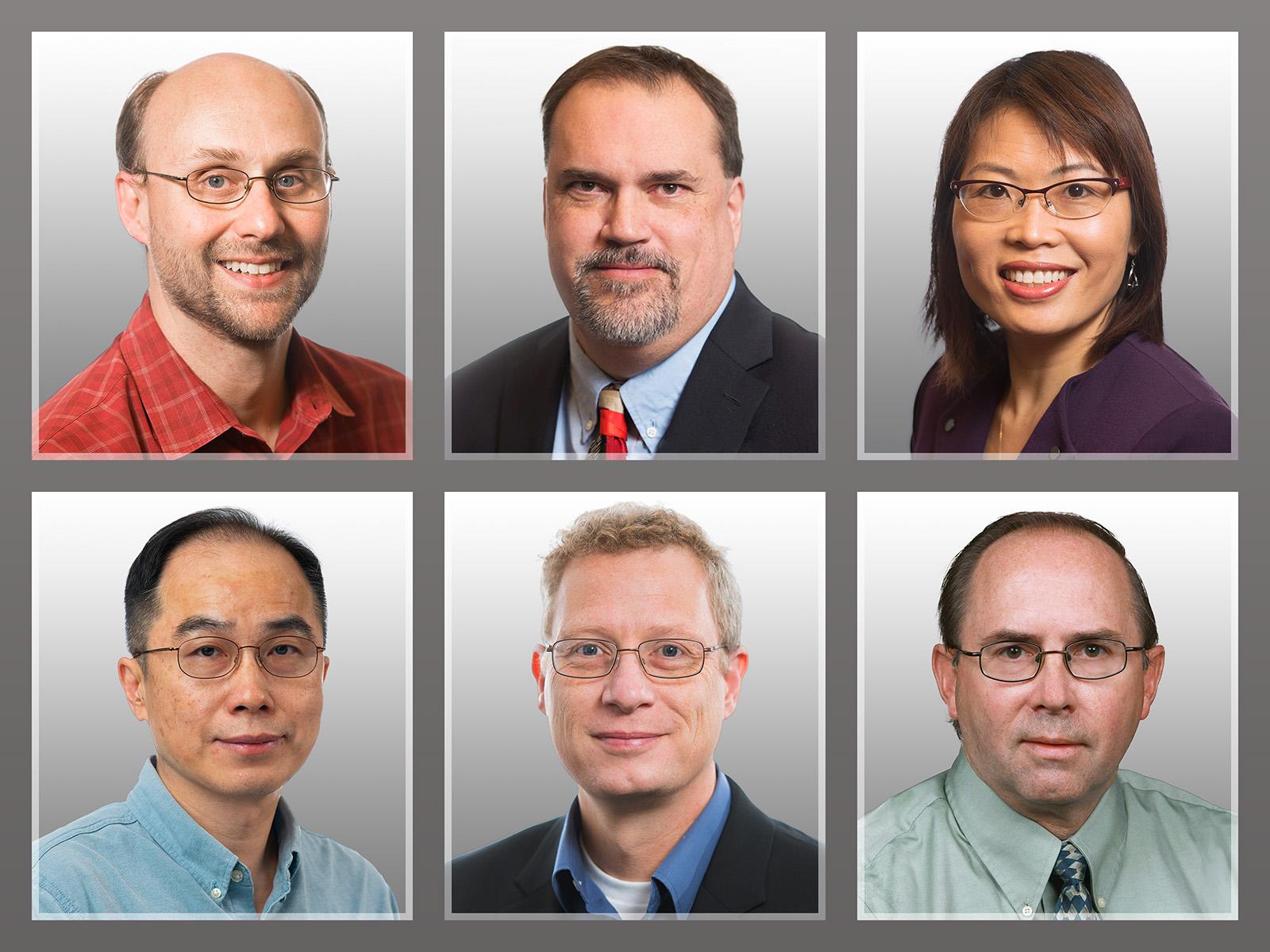 “PNNL bestows the title of Laboratory Fellow or Battelle Fellow upon those who have reached the top of their field, earned international recognition from peers, and consistently demonstrated creativity and leadership in their work,” PNNL Director Steven Ashby said. “PNNL researchers affect the scientific community in ways that only a select few can, earning worldwide recognition for their leadership and research efforts. For this reason, PNNL reserves the distinction of fellow for those who have truly reached the highest levels of scientific achievement.”

Joshua Adkins has effectively applied technologies to enhance understanding of infectious diseases, human health, and protein structure and function. From the ground floor of the development of plasma proteomics, he has been instrumental in establishing PNNL's reputation in this area. Adkins' research focuses on the comprehensive characterization of biomolecules through space and time to better understand biological systems. Of particular interest are highly challenging biological studies that require bridging the gaps between technology development and application. This interest has led him to use host–microbe interactions as tractable model systems. Adkins is an associate director for the Biological Sciences Division and leads the Integrative Omics group and Integrative Omics projects. He has also been the director of the Center for Systems Biology of EnteroPathogens and other research centers. In his roles, he leads and collaborates with talented and multidisciplinary teams composed of scientists from PNNL, universities, and other research organizations whose aim is to better understand a broad range of biological questions from environmental biology, pathogens, and human performance and health. Adkins has bachelor’s degrees in chemistry and biology from the Metropolitan State University of Denver and a PhD in biochemistry from Colorado State University.

David Atkinson applied his significant scientific knowledge and skills to develop groundbreaking technologies, such as real-time atmospheric detection of explosive vapors at parts-per-quadrillion concentrations. His scientific prowess manifested itself by the influence he had with PNNL sponsors. His scientific reputation led to being selected by the U.S. Department of Homeland Security as a senior advisor on the Screening at Speed program, a high-profile investment in the aftermath of 9/11. Atkinson joined PNNL in 2003 and led the development of the explosives detection research and development portfolio. He worked in trace chemical detector development in the U.S. Department of Energy (DOE) national laboratory system since 1992 and was an expert in the area of trace explosives detection. Atkinson had extensive experience in designing instrumentation and developing detection methodologies for various targets of interest to national security. Atkinson passed away on May 10. He left an important and impactful scientific legacy at PNNL—developing trace explosive and chemical agent detection—among countless other achievements.

Jiwen Fan is recognized for paradigm-shifting research on aerosol–cloud interactions that has led to a more thorough understanding of the effect of nanometer- to micrometer-sized atmospheric aerosols on convective storms and related weather phenomena. Her work has important ramifications for weather forecasting and understanding severe storms. Beyond moving fundamental atmospheric science forward, Fan has advanced model capabilities for simulating clouds, aerosols, aerosol–cloud interactions, and wildfires. Over the years, she has developed or improved several modeling tools aimed at predicting weather and climate more accurately or improving scientific understanding. She has published over 110 peer-reviewed journal articles, and her work has been featured in various news and media outlets including Science News, the British Broadcasting Corporation, and National Public Radio. Her recent study showing the impacts of urbanization on storms was highlighted by the American Geophysical Union (AGU) and The Guardian. Fan was an AGU ASCENT awardee in 2015 and received her PhD in atmospheric sciences from Texas A&M in 2007, joining PNNL as an atmospheric researcher in June 2007. Fan was recently appointed an editor of a preeminent journal for Earth system modeling papers, the Journal of Advances in Modeling Earth Systems, for a four-year term from January 2020 to December 2023.

Yun Qian is lauded for groundbreaking work associated with human influence on climate change and is a leader in assessing uncertainties in climate modeling. He was the first scientist to incorporate aerosol effects in regional climate models and is a pioneering scientist in the study of Asian aerosols, revealing their dominant role in robust climatic trends observed in China. He also pioneered modeling the effects of snow and ice impurities on climate and water resources. He leads the Land Surface Modeling and Aerosol and Aerosol–Cloud Interaction teams in the Atmospheric Sciences and Global Change Division at PNNL. He is an expert in developing and using atmospheric and land surface models to advance understanding and modeling of human influence on the Earth system. Qian also pioneered modeling the impacts of snow and ice impurities with natural and anthropogenic origins on climate and water resources, thereby providing new insights on snowpack changes in the western United States and the Himalayas that provide water resources for large populations. Qian joined PNNL in 2000. He holds PhD, master’s, and bachelor’s degrees in climatology from Nanjing University.

Kevin Schneider developed key technologies that are essential to understanding and improving electric distribution systems. His development of distribution and microgrid modeling had significant influence—decreasing simulation time and increasing accuracy—and transformed the power industry through his technical leadership. His main areas of research are distribution system analysis and power system operations. He is a chief engineer at PNNL and manager of the Distribution and Demand Response Sub-Sector. He holds a joint appointment as a research professor at Washington State University (WSU) as part of the PNNL/WSU Advanced Grid Institute. Schneider is an affiliate associate professor at the University of Washington and a licensed professional engineer in Washington State. He is a fellow of the Institute of Electrical and Electronics Engineers, past chair of the Power & Energy Society Distribution System Analysis Sub-Committee, and past chair of the Analytic Methods for Power Systems Committee. Schneider received his bachelor’s degree in physics and his master’s and PhD degrees in electrical engineering from the University of Washington.

Joel Tingey is recognized as one of the nation's foremost experts in characterizing the world's plutonium production, processes, and technologies. With nearly 40 years of experience in plutonium processing, Tingey is revered among colleagues for his expertise in nuclear fuel cycle chemistry. Early in his career, he helped resolve critical safety issues and developed strategies for obtaining and characterizing wastes from Hanford tanks—one of the site’s most enduring and hazardous challenges. His contributions brought physical parameters, specifically rheology, to a domain previously limited to chemical and radiological properties. He has influenced the creation of multiple ASTM standards in spent fuel and high-level waste. Tingey brings more than 25 years of experience working on hot cells to training, mentoring, and engineered solutions, both locally and abroad. His hot cell expertise has been invaluable to the development of International Atomic Energy Agency staff. His technical leadership has been key in building PNNL’s reputation as a plutonium processing laboratory. He is a member of DOE's Plutonium Verification and Mobile Plutonium Facility teams. Tingey first worked at PNNL as an undergraduate and joined the lab as a staff member in 1989. He received his bachelor’s degree in chemistry from Brigham Young University and PhD in chemistry from The Pennsylvania State University.