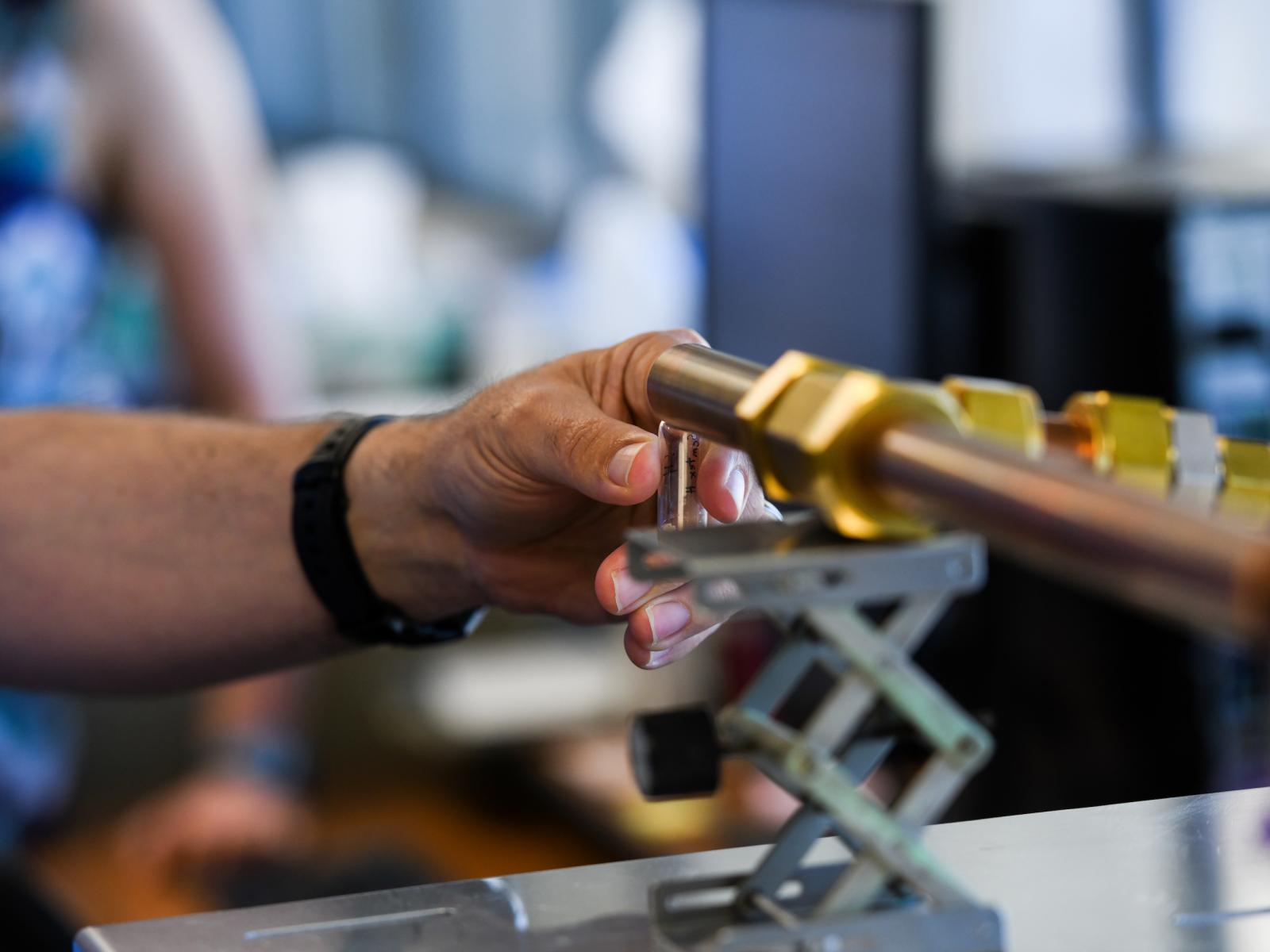 Richland, Wash.-- Floppy-eared sniffer dogs made news earlier this year as the latest change to security screening procedures at airports. But in the not-too-distant future, they could be replaced with a technology that doesn’t tire, get distracted, or require feeding or training.

An ultrasensitive technology developed by PNNL researchers detects explosive vapors, deadly chemicals, and illicit drugs with unparalleled accuracy. And it works in seconds.

First described in the journal Analytical Chemistry, their ion chemistry technique initially identified RDX—a common explosive compound—at 10 parts per quadrillion (ppq). Robert Ewing, a chemist at PNNL and one of the inventors of the technology, compared that level of sensitivity to “finding a single pine needle in the state of Washington.”

The original technology also identified explosive compounds such as C-4, PETN, Semtex, nitroglycerin, and tetryl. Ewing and his colleagues have since advanced the system to detect many more explosive vapors, including TNT, as well as vapors emanating from toxic chemicals similar in structure to nerve agents. The latest enhancement is the ability to detect vapors from illicit drugs such as fentanyl, methamphetamine, and cocaine.

The non-contact technology could be a game-changer for transportation hubs, mail facilities, and other safety and security screening applications.

The technology works by sucking an air sample into a narrow metal tube. Inside the tube, the sample collides with chemical ions and creates a positive or negative charge on the way toward the inlet of a mass spectrometer. The mass spectrometer measures, or detects, the ions of interest based on their charge and mass. Users can adjust the ionization source to selectively react with the compound of interest.

“This is an excellent example of how national laboratories address difficult national challenges,” said David Atkinson, a research scientist in PNNL’s Signature Sciences and Technology Division. Atkinson was Ewing’s collaborator and sounding board on the technology, especially in the early years of development as they overcame barriers in understanding “the art of the possible” when the technology greatly surpassed the performance of state-of-the-art systems—and their expectations.

Airports began using infrared handheld detectors and benchtop X-ray machines in the 1990s to screen cargo for chemical weapons and drugs. Soon after 9/11, Ewing, then an assistant professor at New Mexico Institute of Mining and Technology, was asked about the potential to detect and identify explosive vapors. He waffled, because with the miniscule levels of vapor that would be present, he didn’t think it could be done.

In 2006, with a growing reputation for expertise in atmospheric pressure ionization chemistry, Ewing came to PNNL to lead a project under the laboratory’s Initiative for Explosives Detection, led by Atkinson. At that time, detection technologies couldn’t measure explosive vapors below parts per trillion at room temperature. The molecules in explosives have very low vapor pressure, so they don’t easily escape from their solid form into a vapor.

That’s why common security screening methods rely on contact swabs or swipes—a physical sample, which is then heated and analyzed. These methods are intrusive, labor intensive, and time consuming. Sniffer dogs are an alternative, but in addition to needing rest, they’re also expensive to train and care for.

Plus, Ewing wasn’t convinced what the dogs were really smelling. Then one day during a conference, he saw a demonstration video.

“This guy placed buckets all around a room and put purified RDX in one of the buckets. Then he brought in a trained sniffer dog. That dog immediately hit on the RDX.”

Ewing was a believer. 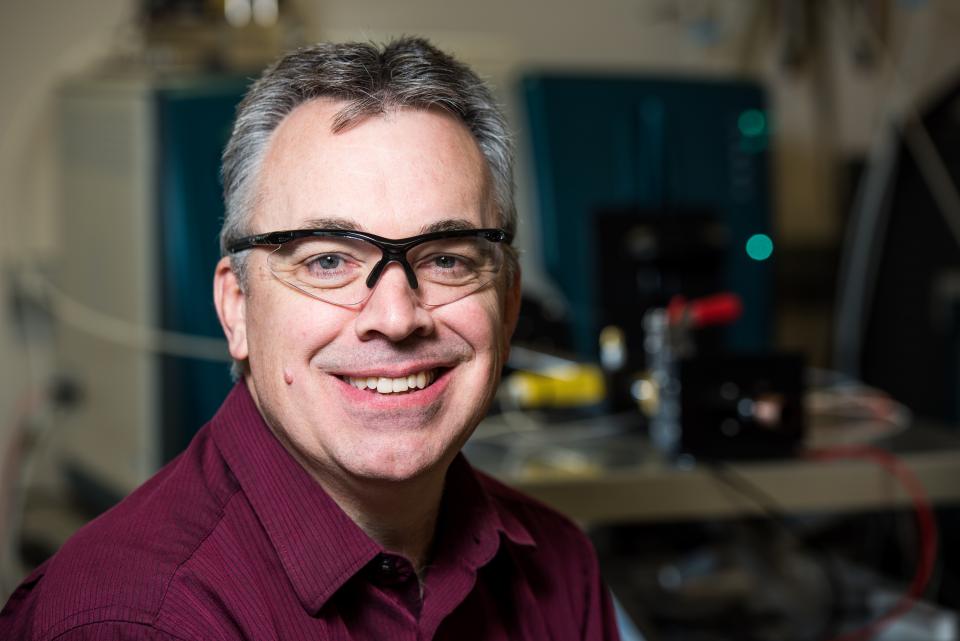 In the lab, Ewing worked on the chemistry for vapor detection. He needed to determine how much of a certain chemical was is in the vapor and whether it could be ionized.

During ionization, electrically neutral atoms or molecules are converted to electrically charged ions. This electric charge is necessary for detection in a mass spectrometer. It comes down to a competition between sensitivity and selectivity—how many collisions are needed to detect a certain ion, or chemical vapor.

He moved the sample inlet and the ionization source further away from the spectrometer. This created more distance—and therefore time—for the chemical ions and sample molecules to bump into each other and react. The small leap from milliseconds to a few seconds made all the difference.

“All the separate pieces were there, but we just hadn’t thought how to put them together. It was so simple,” said Ewing. “When that happens, you wonder why you hadn’t thought of it before, but sometimes that’s just how it works.”

News of their initial RDX vapors research created an immediate buzz. Outlets such as Smithsonian magazine, Popular Science, and the New York Times covered the technology in 2012 and 2013.

But initially, it couldn’t detect TNT, another very common explosive material. This surprised them—and, according to Ewing, “disappointed others.”

Now with help from colleague Blandina Valenzuela, also a chemist, he went back to work in the lab. They found a way to adjust the ionization chemistry and detect TNT within their system.  Another major advancement came when they modified the air tube into two separate channels. This allowed them to simultaneously detect TNT and similar compounds on one side and other explosive compounds, such as RDX or nitroglycerine, on the other side.

Working from the same general concept, Ewing and Valenzuela advanced the technology for greater sensitivity and the ability to detect more types of compounds. The sensitivity of the technology became the bridge to detecting vapors from organophosphates—or deadly chemicals—and narcotics.

Ewing cautions it’s not a one-size-fits-all black box. It can’t see everything at once and must be tailored or customized for the substance(s) of interest. But the same general technology applies—“you just have to tweak the chemistry,” explained Ewing.

The team described the chemistry tweaks in two more research papers published in May 2018. One paper covered homemade explosives, the other covered organophosphates and narcotics, with detection capabilities at concentrations at 100 ppq or better and 160 ppq or better, respectively. These results are orders of magnitude lower than any current technology.

So far, the team has two patents on its invention and another is in the works. Before a public version hits the streets—or the airport, or the mailroom, or any number of places where public safety is imperative—portability and integration into existing screening methods are key hurdles that need to be overcome.

For safety and security, the race is worth it.