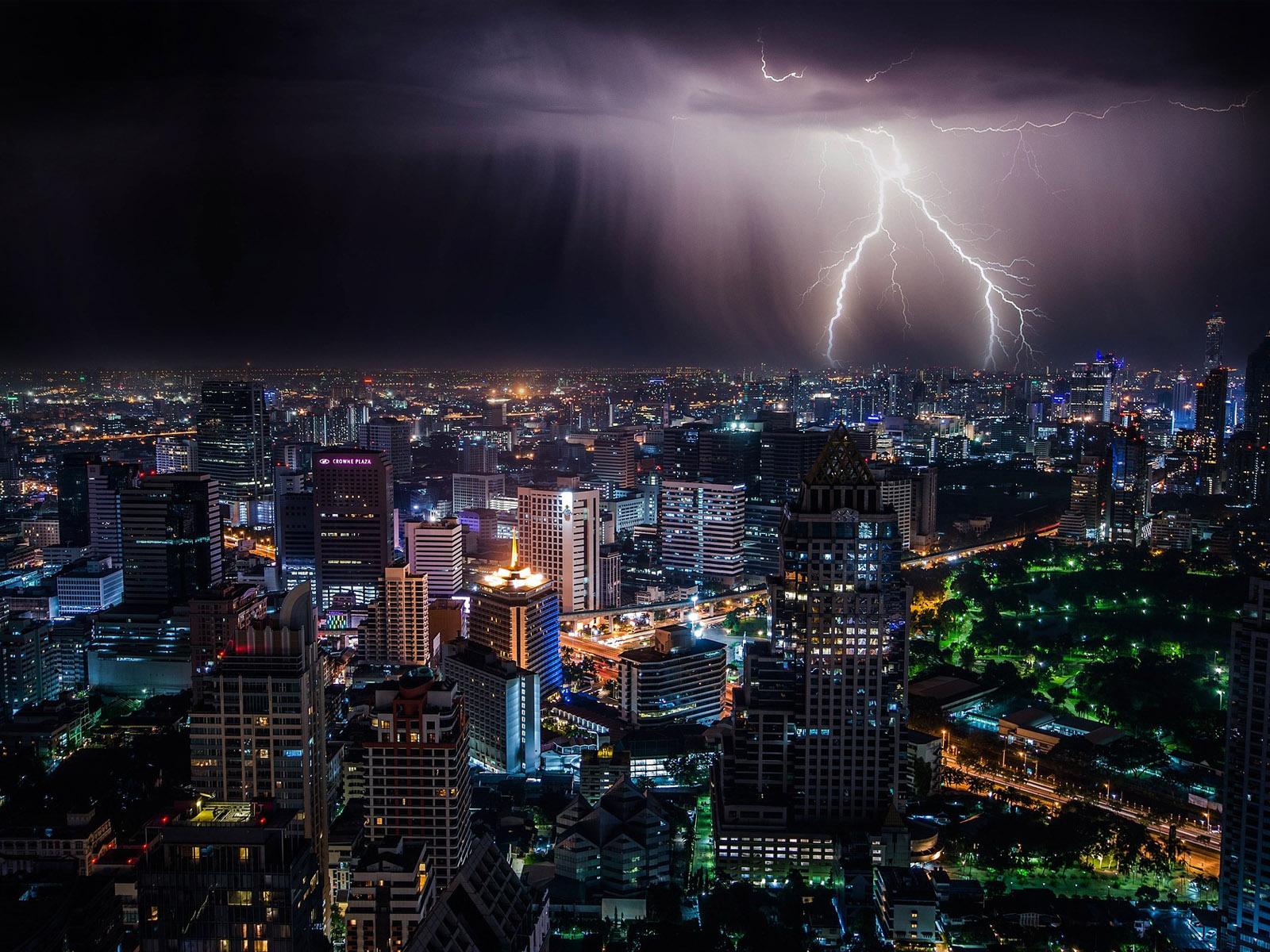 A thunderstorm stirs above a cityscape as lightning touches down near densely packed buildings. The presence of urban land and anthropogenically produced aerosols can amplify hazardous weather, according to new research from PNNL scientists.

RICHLAND, Wash.—Urban landscapes and human-made aerosols—particles suspended in the atmosphere—have the potential to not only make gusts stronger and hail larger; they can also start storms sooner and even pull them toward cities, according to new research exploring the impact of urban development on hazardous weather, led by scientists at the U.S. Department of Energy’s Pacific Northwest National Laboratory.

By modeling two thunderstorms—one near Houston, Texas, and another in Kansas City, Mo.—atmospheric scientist Jiwen Fan teased out the separate and synergistic effects that urban landscapes and human-caused aerosols can have on storms, rain and hail.

In the case of the Kansas City storm, urban land and aerosols worked together to amplify the frequency of large hail by roughly 20 percent. In Houston, an otherwise gentler thunderstorm saw amplified, longer-lasting rainfall that developed sooner, among other changes.

“The novelty of our study is that we consider both urban land and aerosols together,” said Fan, “instead of their separate impacts.”

In previous work, researchers have shown that urban land shapes weather, both through its topographical nature and the heat it produces. Cities are often warmer than their surroundings, because buildings not only absorb and retain the sun’s heat differently than trees and agricultural land, but also block wind flow.

Yet many studies focus primarily on how cities and aerosols change precipitation and temperature, or only examine the influence of those factors separately, rather than their joint effect.

In Houston, afternoon showers swelled as urban land and aerosols worked synergistically to amplify rainfall. Compared to simulations without cities, rain drenched Houston roughly a half-hour sooner, increasing its total by an extra 1.5 millimeters. Sea breeze winds blew stronger as well, whipped up by the influence of urban land.

When cooler, denser air from the sea breeze flowed toward Houston, it brought moisture with it and clashed with warmer, lighter city air. The two mixed upon meeting, creating stronger convection compared to simulations without urban land.

Houston’s thunderstorm clouds began as warm clouds with only liquid drops, but the strengthened sea breeze caused a quickened transition to mixed-phase clouds, named for their simultaneous mixture of water vapor, ice particles and supercooled water droplets. Even after the sea breeze trickled off, said Fan, residual heat from the city continued feeding storm convection well through the night, causing longer-lasting rain. Contrast that with Fan’s simulation where the city was removed, showing a weaker sea breeze and a storm that dissipated sooner.

In the case of the Kansas City storm, heat from the city was carried downwind, where it met the already formed storm at the northern urban-rural boundary. When warmer, drier air met with cooler, moister rural air, it intensified convergence, creating turbulent mixing and a more violent storm that moved toward urban land.

In contrast with Houston’s thunderstorm, Kansas City’s aerosols did not influence storm initiation or propagation, nor did they, on their own, greatly influence hail. But, when simulated alongside urban land, the two amplified hail, synergistically producing a more hazardous hailstorm. Because of this relationship, said Fan, it’s important to consider both urban land and aerosols when exploring the impact cities have on weather and associated hazards.

Hail alone inflicts billions of dollars of damage in the U.S. and, according to the National Oceanic and Atmospheric Administration, it is possible for especially large hailstones to fall at over 100 miles per hour.

Urban land and aerosols shape weather differently, according to Fan, depending on other environmental conditions, like whether air is already polluted.

“The aerosol effect really depends on the background concentration,” said Fan. “If the environment is already polluted, adding more aerosols doesn’t seem to affect much. But if you’re already in clean a condition and you add aerosols, it may produce a large impact.”

Houston’s busy shipping channel and nearby oil refineries, three of which are in its metro area, regularly discharge aerosols into the atmosphere, said Fan. Humidity, too, she added, can amplify the aerosol effect.

Fan hopes her work may lead to more accurate predictions of hazardous weather, mitigating the death and damage dealt by storms. She plans to more deeply explore how sprawling urbanization will shape severe storms in future climate scenarios.