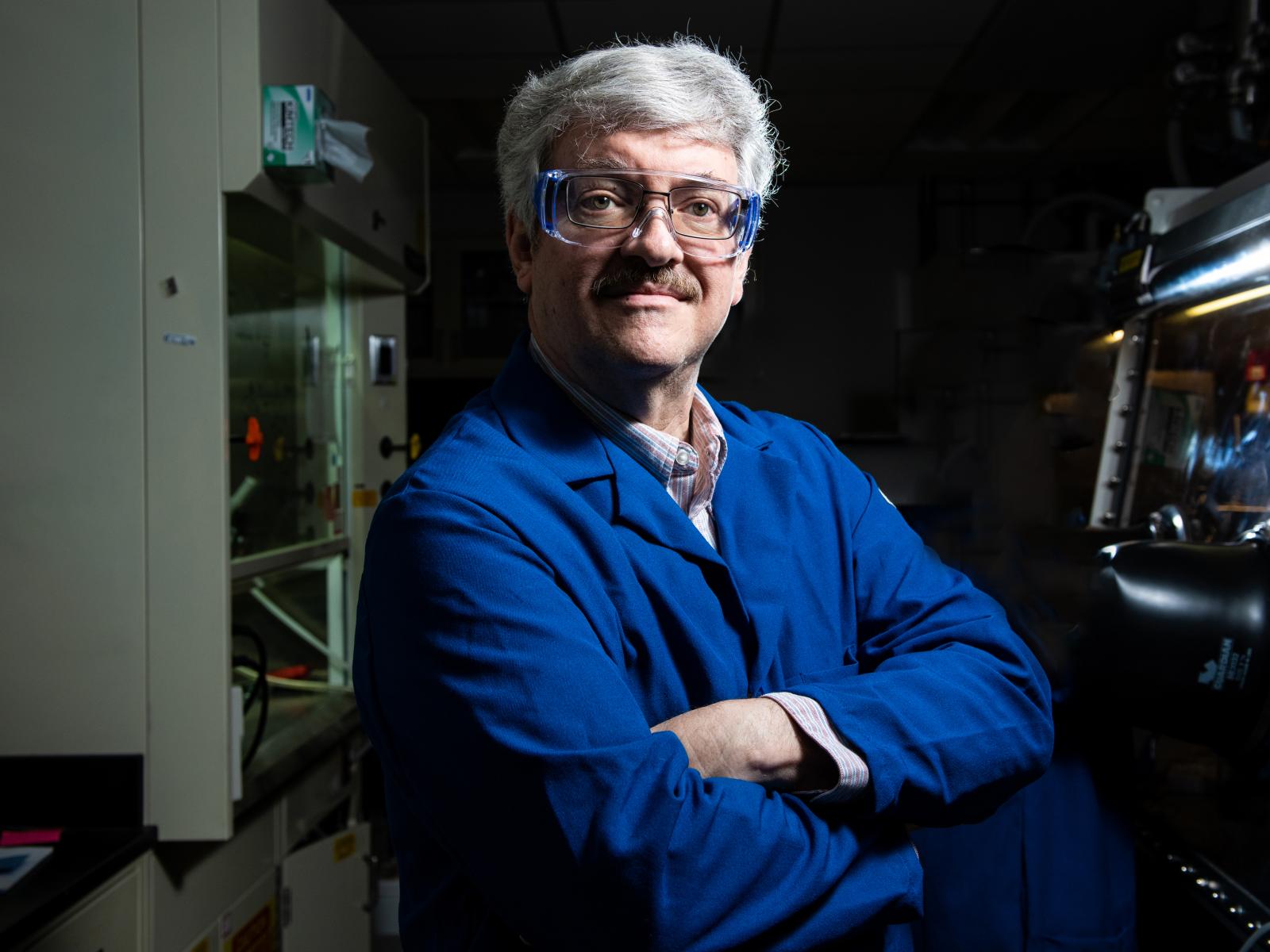 Morris Bullock, a PNNL Laboratory Fellow, is director of the Center for Molecular Electrocatalysis, an Energy Frontier Research Center.

One of the better days in Pacific Northwest National Laboratory (PNNL) history occurred in April 2009.

That’s when the White House and Department of Energy (DOE) announced that PNNL would be lead organization for one of the newly created Energy Frontier Research Centers (EFRCs). From the start, the centers were charged with the mission to accelerate scientific breakthroughs needed to build a 21st-century energy economy, laying the groundwork for fundamental advances in electricity storage and transmission, renewable energy, and energy efficiency, among its many goals. The opening round of five-year EFRCs funding was $777 million, with more funding to be distributed to centers that continued to be renewed.

PNNL would use its initial round of $22.5 million to launch the Center for Molecular Electrocatalysis, with chemist Morris Bullock as its director.

Over the years, the DOE has awarded the center subsequent rounds of funding as it pursues the efficient conversion of electrical energy and chemical bonds through control of electron and proton transfers. Today, Bullock and other center researchers are preparing to move into the new Energy Sciences Center (ESC), the $90 million PNNL building dedicated to accelerating scientific discovery in chemistry, materials science, and computing.

“I’ve toured the building,” said Bullock. “It’s been designed with open areas to foster informal exchanges with colleagues. We’ve missed that sort of interaction during the pandemic.”

Some people may hop between academic interests from high school through the final semester of college. Not Bullock. Starting with the first chemistry class at Ragsdale High School in Jamestown, N.C., Bullock was smitten. “I liked figuring out how things work,” he said. “Chemistry helped explain how things work. I wanted to know more.”

There was never any doubt Bullock would attend college. His father, an advertising salesman for the Greensboro News & Record, and his mother, a secretary who often was asked to type her son’s high school term papers, made sure of that.

From the first day at the University of North Carolina-Chapel Hill to graduation, he was immersed in chemistry.

“He stood out then as a notable student with unusual skills in research,” said UNC Professor Thomas Meyer, who was an academic adviser for Bullock and steered the young student toward inorganic chemistry.

“Watching him progress in his career has been a real pleasure,” said Meyer, himself the former director of the Alliance for Molecular Photo Electrode Design for Solar Fuels, an EFRC led by the UNC Chemistry Department.

Bullock found the transition to graduate-level chemistry at the University of Wisconsin-Madison to be more of a system shock than the high school-to-college transition. “It was intense,” Bullock said. “I did the same thing as I’ve done all my life. Stick with it and redouble my efforts to learn what I need to learn.”

After earning his PhD in chemistry from Wisconsin, he worked as a postdoctoral research associate at Colorado State University. That experience wiped away any notion of taking his skills to industry. Bullock was interested in a fundamental research job.

A research home at Brookhaven

He saw an ad in a professional publication. Brookhaven National Laboratory in Upton, NY, was searching for an organometallic chemist to do basic research. “That sounds like me,” Bullock thought. Thus began a 21-year relationship.

“They let me set up my own research program,” Bullock said. “They let me have a lot of freedom to pursue the fundamental research that I was interested in. That was an important foundational part of my career—to have some flexibility in the kinds of research I wanted to do.”

In 2002, that research led to Brookhaven naming Bullock the recipient of its Science and Technology Award. At about the same time, Bullock met PNNL scientists at conferences, connecting faces with some of the research papers he’d read for years. He heard about PNNL’s plans to grow its molecular catalysis research. He was intrigued. In November 2006, Bullock, his wife, and two young children moved from one edge of the country to the other.

He found a PNNL catalysis kindred spirit in Daniel DuBois, who also arrived at the lab in 2006 and who would later be named a PNNL Laboratory Fellow.

“I had a tremendous admiration for Dan’s chemistry insights,” said Bullock, who became a PNNL Fellow, the Laboratory’s highest honor, upon his arrival. “It was one of the most exciting times professionally I’ve ever had. My office was next to his for five years and we were constantly bouncing ideas off one another.”

Three years after their arrival, Bullock was named director of the Center for Molecular Electrocatalysis (CME); DuBois was deputy director.

“Dan had an absolutely crucial role in the foundation of the center,” Bullock said of his colleague, who retired in 2010 and remains a friend and informal consultant. “It wouldn’t have happened without him.”

The research builds on what Bullock started at Brookhaven. Hydrogen has been a focus.

“In our current research, we are studying hydrogen atom transfers as a key step in the oxidation of ammonia,” said Bullock, “in which the nitrogen-hydrogen bond of ammonia bound to a metal is cleaved, to learn more about these reactions and to guide the design of improved molecular catalysts for this critical reaction.”

Of the 49 centers granted funding in 2009, fewer than a handful—a number that includes CME—continue to receive funding today. After the initial grant cycle, the DOE has extended CME’s funding for two additional cycles.

“The original award came after a very competitive call for proposals. The proposal submitted by Morris was visionary,” said computational scientist Simone Raugei, the principal investigator of the DOE Physical Biosciences Program at PNNL who joined the CME when it started. “It was visionary because it used novel concepts learned from enzymes while tapping into synthetic catalysts to enhance proton and electron delivery. Over the years, we have reshaped the strategic configuration of our center while meeting the Department of Energy’s long-term goals.”

Recognition for a career of achievement

Bullock’s scientific contributions have gained attention well beyond PNNL. In late March, the American Chemical Society honored Bullock with the 2022 ACS Award in Organometallic Chemistry. He will become the first national laboratory employee to receive the award.

The nomination package noted Bullock’s more than three decades of award-winning work in organometallic chemistry and pointed to Bullock’s work exploring the wider use of Earth-abundant metals as catalysts. Bullock was lead author of a research review published in a 2020 issue of Science arguing that Earth-abundant metals are poised for greater use, especially as catalysts. He also served as editor of a book, Catalysis Without Precious Metals.

As a leader in the scientific community, Bullock has presented his research throughout North America, in Asia, and in Europe. Bullock is an elected fellow of the ACS, the Royal Society of Chemistry, and the American Association for the Advancement of Science, and was elected to the Washington State Academy of Sciences in 2018. He holds seven patents, is editor of a book, and authored or coauthored six book chapters and 190 papers.

When he commented on the ACS award last year, Bullock deflected credit. “The Department of Energy’s Basic Energy Sciences program deserves complete credit for me receiving this award,” he said. “DOE-BES has funded my research for more than 35 years.”

Collaboration and continuation at the ESC

That sense of teamwork suffered during the pandemic, he said. Video calls aren’t sufficient, he said, recalling how much he appreciated the ability to talk to DuBois face to face, every working day.

“Dan would patiently explain chemistry concepts to me over and over,” Bullock said. “If I didn’t understand the next day, I’d head to his office and say, ‘Can you explain it again?’ He was tremendously patient. He was the ideal colleague, to learn from and to interact with.”

Bullock noted that the Energy Sciences Center has been designed to foster communication.

“We want to have these interactions and exchanges,” Bullock said. “You want to be able to sit down with a colleague and talk about something in detail for a while, or sketch something out on a white board. That’s something that will happen when we move into the ESC.”

And it’s in the ESC where history will continue to unfold, starting with that standout day in 2009 when Bullock and others were included among the original Energy Frontier Research Centers. “That work is not done,” Bullock said. “We’re excited about where scientific discovery will lead us next.”