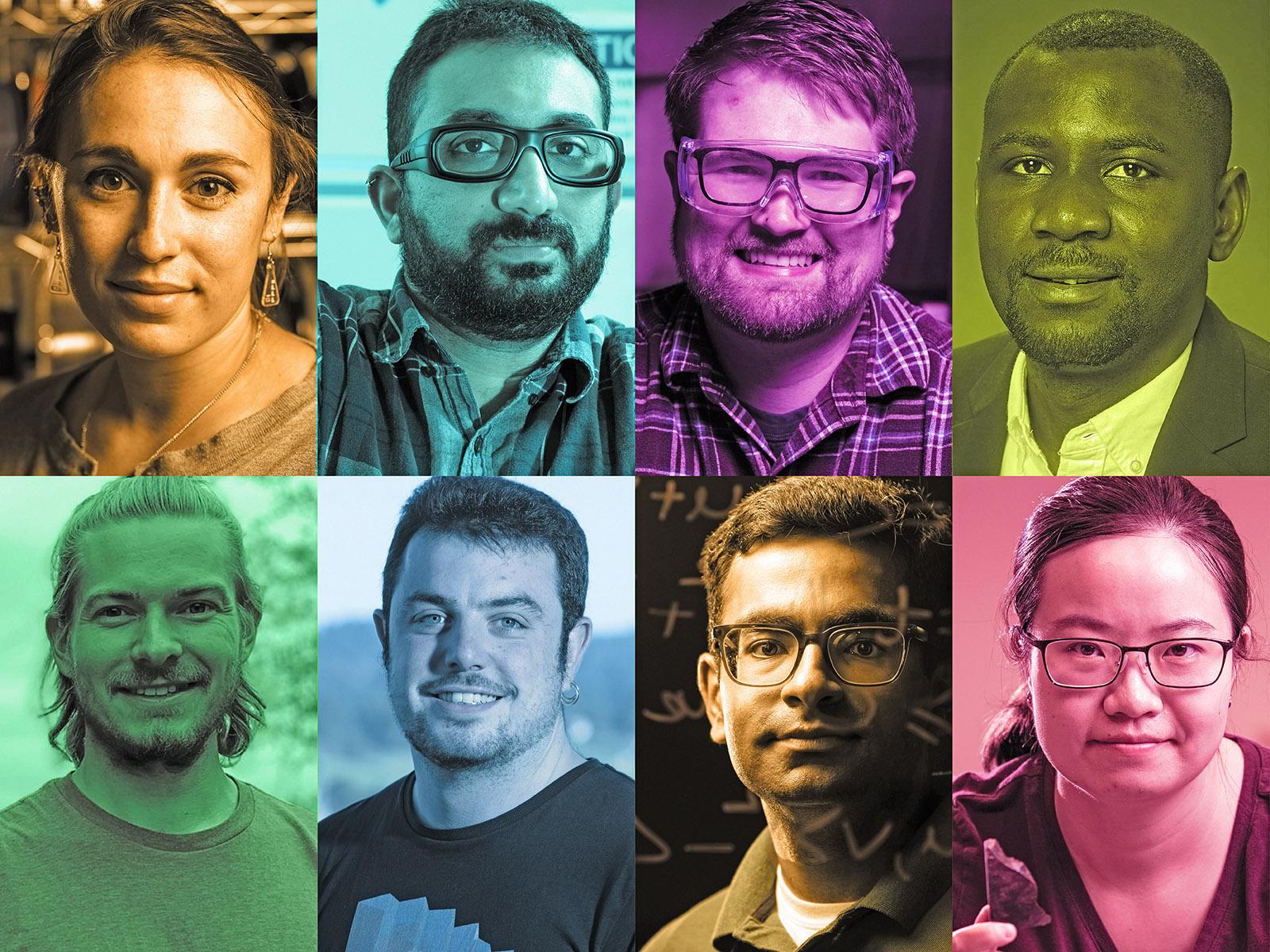 Profiles of the eight featured postdocs from around the laboratory show how talented early career scientists help PNNL fulfill its national mission and global reach.

About six percent of the roughly 5,300 employees at Pacific Northwest National Laboratory (PNNL) are postdoctoral researchers. Postdocs, as they’re commonly called, work independently to further refine skills in their area of expertise or apply knowledge from their graduate work to fields new to them. They mentor younger scientists, develop and continue research collaborations, and harness opportunities to explore their passions.

This week, PNNL is honoring its 323 postdoctoral researchers as part of the twelfth annual National Postdoc Appreciation Week.

“Postdocs are integral members of our teams who bring diverse perspectives and make impactful contributions to our mission,” said Laboratory Director Steven Ashby. “We are committed to providing an enriching experience in which they work alongside our talented scientists and engineers, learn new skills, and expand their professional networks.”

78 postdocs are finding solutions for energy and the environment.

These eight profiles of postdocs from around the laboratory show how talented early career scientists help PNNL fulfill its national mission and global reach.

Chemist Anne Arnold channels her creative streak into developing new materials at work and into art outside the lab. She has apprenticed as a tattoo artist, using bodies as a canvas for expression.

Arnold’s work with ink extends to materials science too. At PNNL, she helped develop a bioink for 3-D printing that contains a sugar from seaweed to form a stable gel without heat. Most 3-D printing inks are plastic-based and need high heat to be workable. Arnold and her colleagues have used their new ink to print complex structures containing living cells, which could eventually be scaffolds for tissue engineering.

A naturally curious person, she draws from chemistry, materials science, and biology to solve scientific problems in the lab. Her current work involves developing and studying materials to use in applications ranging from the aerospace industry to the commercial use of 3-D printing, called additive manufacturing.

“The breadth of projects available at PNNL lets me tap into my favorite part of science—its ability to explain how the world works,” said Arnold.

Materials scientist Xiaonan Lu’s relationship with PNNL started with a summer internship in 2014. A graduate student at the time, Lu came to the laboratory to participate in collaborations established by her PhD advisor. This provided an early opportunity to learn about working at a national laboratory.

When Lu finished her PhD two years ago, she joined PNNL to continue working with her colleagues. “I see PNNL as a place that allows me to constantly learn from passionate and friendly scientists,” said Lu.

Lu’s research focuses on designing, characterizing, and modeling the process that converts nuclear waste into glass. Much of her work involves developing and running computer simulations that can predict properties of new glass compositions. She specifically focuses on their thermal properties and chemical durability.

Lu is particularly proud of a project related to cleanup at the Fukushima Daiichi nuclear plant in Japan. The plant is being decommissioned after three reactors at the plant melted down following damage from an earthquake and tsunami in March 2011. Lu wrote a computer program to formulate optimal waste glass compositions for the secondary waste generated by treating contaminated water at the site, helping evaluate different glass-forming technologies.

Chemist Sebastian Mergelsberg has always been a problem solver. “As an undergraduate, my roommate often asked me to solve math equations since I could come up with an answer faster than a calculator,” said Mergelsberg.

His PhD research examined how crabs, lobsters, and shrimp form their shells using minerals in their environment. Mergelsberg drew inspiration from work done by materials scientist and Battelle Fellow Jim De Yoreo. De Yoreo and colleagues examine how biominerals, such as calcium carbonate, crystallize into chalk, shells, and rocks.

At PNNL, Mergelsberg works with geochemists researching how minerals grow and dissolve at small scales. His work focuses on systems such as carbonate minerals like those found in limestone and coral. Understanding how carbon-containing minerals form and interact with nutrients might help scientists predict their future changes based on an evolving climate.

One of his recent successes involves pushing the boundaries of what can be measured. Through careful data analysis, Mergelsberg extracted structural information about the presence and nature of defects in iron oxides. Despite being less than one percent of the total structure, these defects play a key role in determining material behavior and reactivity.

Statistician Moses Obiri wants to make a difference in people’s lives. He brings his background in statistics to a wide range of research problems, collaborating with other scientists to refine their research questions and understand the statistics behind their results.

“I enjoy many aspects of my job, but the opportunity to learn by collaborating on projects is my favorite,” said Obiri. He learned teamwork on the soccer field, having previously considered a career in the sport. Obiri’s scientific collaborations have taught him about topics in domains including biological, materials, and environmental science.

Despite only being at PNNL for a few months, Obiri has integrated himself into an interdisciplinary team working to identify toxic chemicals at the U.S. Department of Energy’s Hanford Site. Obiri’s role involves developing a sampling method and establishing a monitoring process to identify potential emissions locations. A major goal of the project is to protect workers from high concentrations of dangerous chemicals.

This type of project is what drew Obiri to PNNL, providing a way to use statistics to steer workers clear of hazardous chemical emissions.

Earth scientist Kaizad Patel developed a passion for the outdoors at summer nature camps during childhood. “It led me to a career in environmental science, where I’m now studying soil processes,” said Patel.

Patel has collaborated within and beyond PNNL to work in various geographic locations and ecosystem types. His work has helped researchers understand micro-scale as well as larger, watershed-level processes that affect how soils function in land-based ecosystems.

His current research centers on how soil carbon responds to flood and drought. This will help researchers better understand how climate change, including extreme moisture fluctuations, affects ecosystem function. This work involves collecting soil samples from different locations, doing laboratory manipulations, and performing high-precision chemical analyses. Patel uses the analyses to determine changes to the amount and quality of soil carbon and how this affects long-term soil function.

Patel attended graduate school in Maine and developed a suitably wintry thesis project. He led a team of students and researchers to shovel snow after every snowstorm for two years, a significant undertaking because most parts of Maine receive over 50 inches of snow per year. They compared different types of frost in soil and learned that “concrete frost” can greatly affect spring and winter nutrient availability. Spending all that time out in the snow might account for one of his favorite hobbies: knitting hats and scarves.

A summer internship at Lawrence Berkeley National Laboratory during his graduate studies convinced mathematician Saad Qadeer that his future should be at a national laboratory. “Everything about that experience was incredibly positive,” he said. “From then on, I looked for a chance to join a national lab.”

At PNNL, Qadeer’s research focuses on fusing insights from analysis and machine learning to develop efficient numerical techniques that can accurately solve physical models in complex domains. An example problem is modeling how fluid flows on a curved cell membrane.

While computer scientists have used machine learning for years, mathematicians have only recently begun investigating how machine learning can help solve such applied math problems. “Given the relative newness of this approach, my work feels like exploring an uncharted frontier,” Qadeer said.

The idea of intrepid scientists venturing to intellectual parts unknown is what originally drew him to a career in science. Inspired by engineers who figured out how to fix cameras that didn’t work properly in extreme temperatures, Qadeer wants to continue bringing scientific solutions to real-world problems.

When aquatic scientist Peter Regier started thinking about his career, he wanted to do meaningful work related to climate change. Environmental science classes during a semester abroad pointed him in his current direction.

While working at the University of New Mexico, Regier led a project identifying different stormwater inputs into the Rio Grande River. He wrestled with large and complex datasets to produce findings applicable to fundamental science and watershed management.

“During my postdoctoral fellowship, I wanted to move beyond studying single sites and do science at a larger scale,” said Regier. He joined the PNNL-led COMPASS team that’s asking complex, big-picture environmental questions about how coastal systems respond to climate change. The project brings together scientists with a range of technical backgrounds and perspectives, enabling them to generate exciting new ideas.

His role on the COMPASS team involves finding statistical tools to decipher complex water quality data collected by sensors across coastal regions of the United States. The data will help scientists better predict how coastal interfaces will change in response to events like sea level rise and human disturbances.

During his PhD research in environmental economics, Jon Sampedro worked extensively with the Global Change Analysis Model (GCAM). Now, as a postdoctoral fellow at PNNL’s Joint Global Change Research Institute, he’s helping develop the next generation of tools for it. GCAM is an integrated software tool hosted by PNNL that allows researchers to explore the dynamics of the coupled human–Earth system and the response of this system to global changes.

Last year, Sampedro led a short lab-funded project to develop a program that estimates a range of health and agricultural effects attributable to air pollution for any scenario in GCAM. It was his first time leading an initiative, and he’s proud of the project’s success.

The team behind GCAM consists of researchers with a wide range of technical backgrounds, including economists, engineers, statisticians, and computer scientists. Sampedro is used to working in a team with different skills sets, spending his spare time playing the saxophone and traveling with his band.