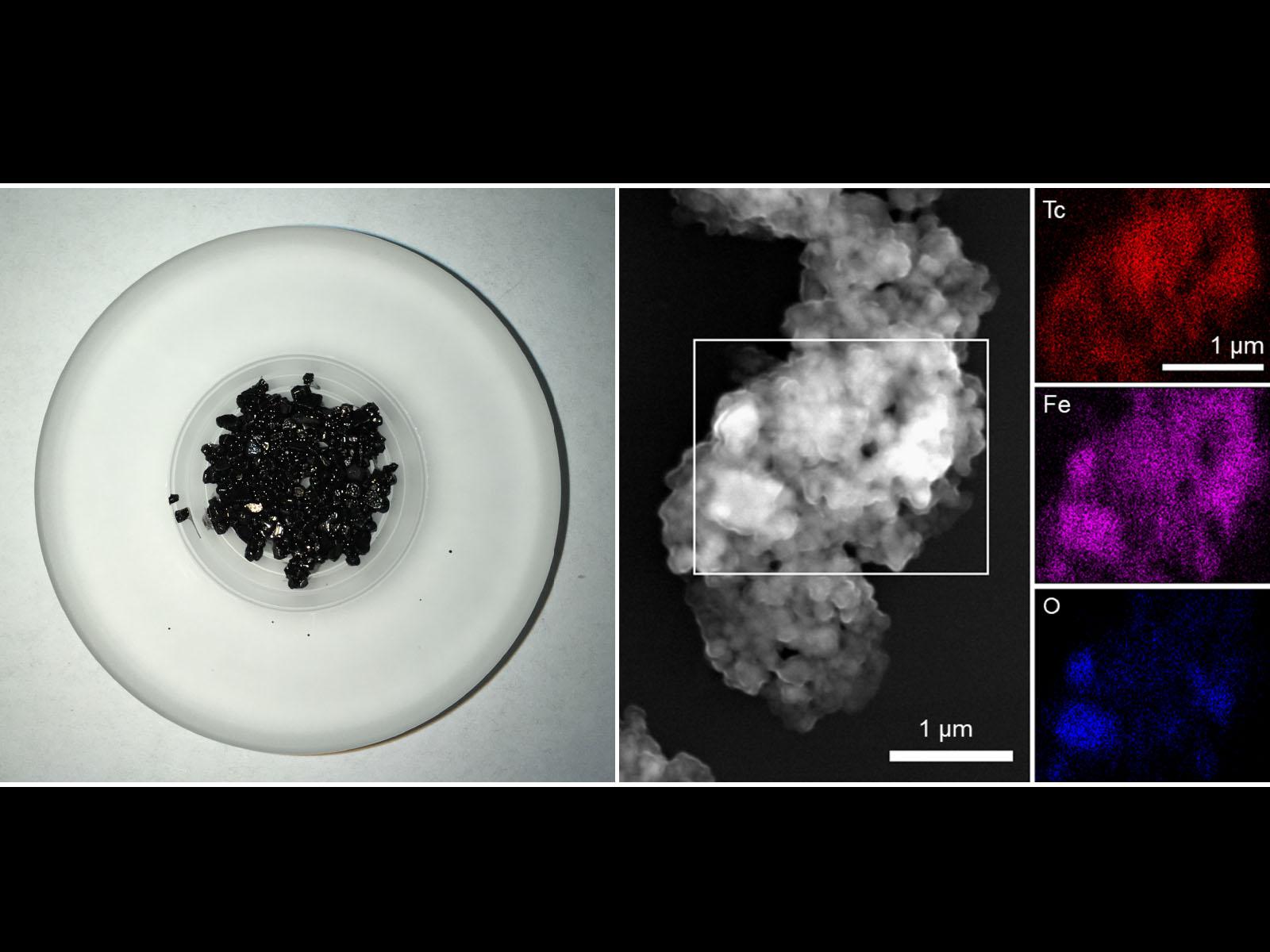 Iron granules (left) after one month of contact with technetium. Viewed under a scanning electron microscope, the red spots (top right) indicate that technetium is now retained by the iron’s newly formed mineral phase.

Millions of medical imaging procedures each year rely on radioactive technetium. One of its radioisotopes decays quickly and is useful as a tracer material in nuclear medicine. But another, technetium-99, is very long-lived, poses a risk to the environment, and is a potential health threat.

Technetium can be found in nuclear reactor waste and at sites that processed uranium for nuclear weapons during the Cold War, such as the Hanford Site in Washington State. The most prevalent form of technetium—called pertechnetate—is water soluble and has a high potential for spreading through the soil and groundwater.

But now, researchers at Pacific Northwest National Laboratory (PNNL), Florida International University, and the Illinois Institute of Technology are closer to understanding how high concentrations of technetium-99 can be treated by simple iron, which is inexpensive and readily available.

The team recently completed experiments in which almost all—99.8%—of the technetium was removed from a liquid solution after one month in contact with iron particles. This occurs as the iron oxidizes or loses electrons in a chemical process called reductive removal.

The team went on to analyze the reaction products at the atomic scale with sophisticated instruments at PNNL’s Radiochemical Processing Laboratory and two U.S. Department of Energy (DOE) Office of Science user facilities—EMSL, the Environmental Molecular Sciences Laboratory at PNNL, and the Advanced Photon Source, located at Argonne National Laboratory.

Researchers revealed in the Nature Research journal Communications Chemistry that clusters of technetium partially incorporate into iron minerals, such as magnetite, during simultaneous iron oxidation and mineralization. This is the same incorporation mechanism that would be expected in a natural system.

“The fact that this experiment was conducted in conditions that would spontaneously occur with the introduction of iron, known as zero valent iron, has positive implications for environmental cleanup efforts in the subsurface or nuclear waste treatment systems,” said corresponding author Tatiana Levitskaia, a chemist at PNNL.

Researchers also found that the presence of technetium slows the oxidation of the metallic iron and its ultimate transformation from ferrihydrite to magnetite. The slower process gives the technetium time to incorporate into the magnetite.

Once lodged within the crystalline structure, the technetium does not re-oxidize back to its more mobile form of pertechnetate—it is instead sequestered for the long term, which minimizes the risk of release back into the groundwater or subsurface environment.

The research team continues to work with zero valent iron. They have tested its ability to separate and sequester technetium at Hanford, where cleanup will involve vitrification—or turning liquid wastes into glass—for safe long-term storage. A portion of the technetium may not fully incorporate into the glass and end up in a secondary waste stream. Zero valent iron may be effective in removing technetium from these secondary wastes.

The research was supported by DOE’s Office of Environmental Management and its Minority Serving Institution Partnership Program. It was performed as part of DOE’s Technetium Management Project.