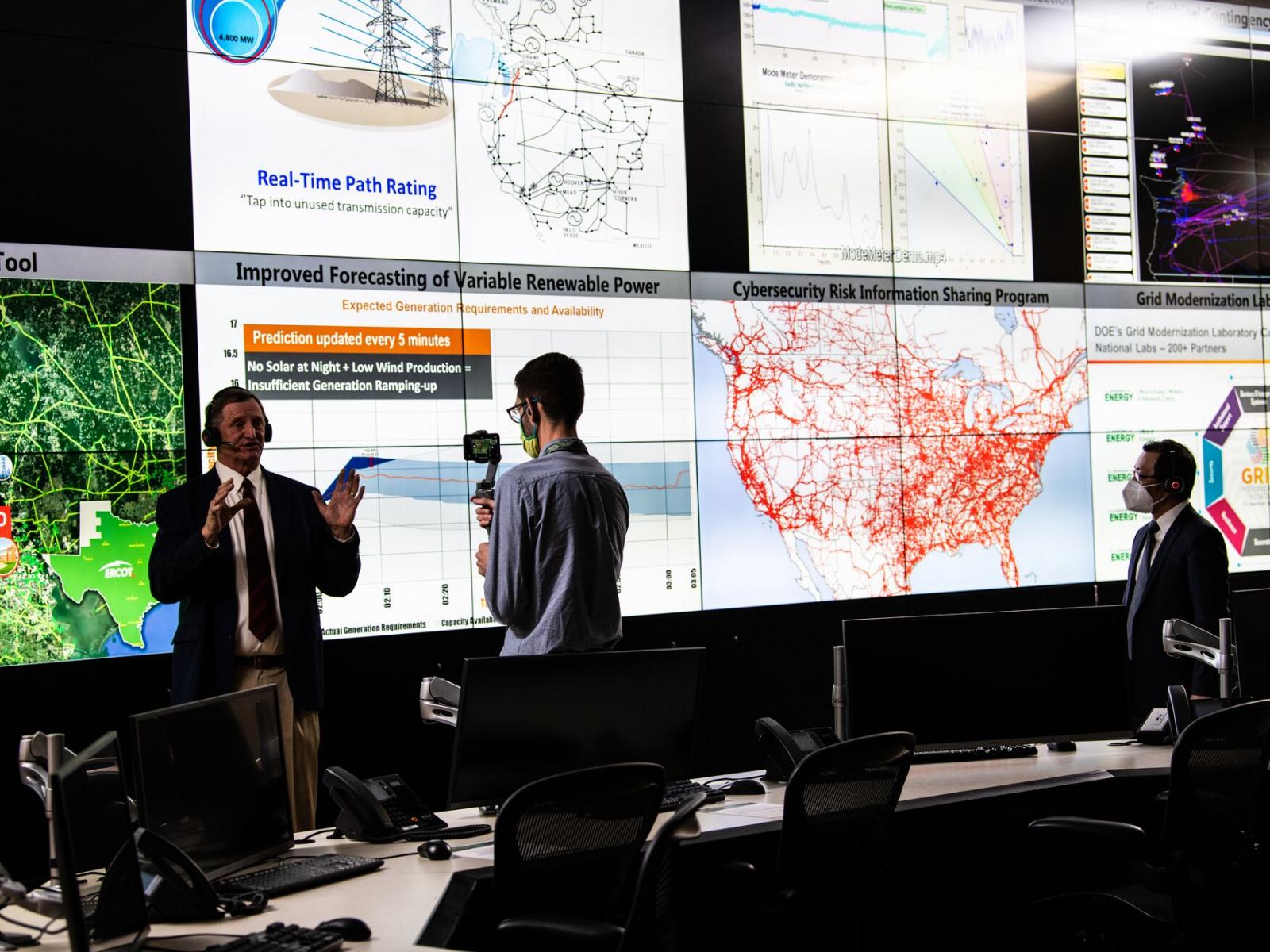 Granholm, the former Michigan governor who is the second woman to lead the U.S. Department of Energy (DOE), is conducting similar visits to other national labs after being sworn into office Feb. 25.

“You're the reason why I and others have often said that the Department of Energy is America's solutions department,” Granholm said during a town hall with staff at PNNL, “because you’re the ones who are breaking through these boundaries of what's possible and unlocking answers to our biggest questions or clearing the way for America to win the 21st century. And from my perspective, you're offering a renewable source of hope.”

PNNL Director Steven Ashby, who served as Granholm’s guide on the virtual lab tour, noted the importance of Granholm’s role in his introductory remarks.

“PNNL is an international leader in climate and atmospheric sciences,” Charlette Geffen, director of program development at the Earth and Biological Sciences Directorate, told Granholm. “We’ve been gathering measurements and translating those into improved climate models for the last 30 years.”

Geffen, standing in an Atmospheric Measurement Laboratory, noted that PNNL scientists in Richland as well as research partners at the Joint Global Change Research Institute in College Park, Maryland, are members of the Intergovernmental Panel on Climate Change. Geffen later said that PNNL has been part of the multi-lab Atmospheric Radiation Measurement User Facility since its inception.

“They're being consulted by this administration to help understand and evaluate pathways for addressing climate change,” Geffen said of PNNL atmospheric scientists, “including the role of advanced energy technologies.”

Ruby Leung, a Battelle fellow at PNNL and chief scientist of the DOE-supported Energy Exascale Earth System Model (E3SM), described that model for Granholm, highlighting the essential role it plays in understanding climate change. Leung noted that current E3SM studies are exploring the mid-Atlantic region and another in the Great Lakes region.

“As a former governor of Michigan, I’m really interested in the Great Lakes modeling,” Granholm said to Leung. “What’s the information that you’re gleaning that’s helpful to the folks who are on Lake Michigan and feel like they have lost their beaches because of the growing size of the Great Lakes?”

Leung replied that E3SM was capable of zooming into specific geographic regions, such as the Great Lakes, exploring a variety of environmental impacts.

“We're exploring the fundamental science of energy storage materials,” Shaw, strolling through the Environmental Molecular Sciences Laboratory, told Granholm. “Things like catalysts and batteries, things that can enable a net-zero carbon emission future. With batteries, we're trying to understand the fundamental science that would allow them to have a higher energy density while maintaining their safe operation so that things like your Chevy Volt can run even further in between charges.”

Granholm, seated in her Washington, D.C., office, chuckled at the reference to her personal vehicle, telling Shaw, “You’ve done your homework!”

Shaw delivered a quick overview of PNNL’s catalysis research, noting that PNNL developed the technology for the catalytic converters used in Dodge Cummins diesel pickups, and displaying an instrument that will accelerate catalysis research.

“What’s it called?” Granholm said, referring to the device.

Standing in front of a large poster depicting the Energy Sciences Center, Shaw told the secretary that the Center’s “focus is on the energy storage materials that we've talked about here today with catalysts and batteries being their focus. In addition to the science, this facility from its inception has been about collaboration, bringing collaborators from around the world to help escalate and advance innovation that can come to help solve these challenging problems. These include academic partners and industrial partners.”

Johnson, speaking from the same lab as Shaw, described the role supercomputers play in research to supplement laboratory experiments. “My work is primarily on energy storage, carbon neutral fuels, and also the molecules called catalysts that make these transformations possible. So, catalysts and batteries are a big part of our energy landscape.”

Shaw and Johnson described PNNL’s efforts to reach students interested in science. Shaw said she started work at a national laboratory as an undergraduate; Johnson told the secretary about her volunteer work as a science, technology, engineering and mathematics ambassador.

“You guys are awesome,” Granholm said. “I look forward to meeting you, hopefully face-to-face.”

“PNNL is at the forefront in the search for better batteries,” said Cindy Powell, the energy processes and materials division director in the Energy and Environment Directorate, “with research that spans from fundamental science—and you saw some of those really cool tools that we have access to in your last tour stop—all the way through materials, discovery, and development and then out to partnership with folks and users around the country to really understand how batteries work in real service conditions.”

Powell spoke to Granholm while standing next to Albert, the nickname applied to a robotic chemical testing machine. Powell said Albert takes chemistries that show promise for energy storage, “then he makes them in small quantities and you can form an initial suite of tests to validate whether these materials have what it takes to be a better battery.” Powell then displayed a tiny vial holding fluorenone to the secretary, saying PNNL researchers had found the inexpensive chemical effective in grid-scale energy storage, a finding published May 21 in the journal Science.

Materials scientist Jie Xiao, a lab fellow and group leader of the Battery Materials and System group, gave Granholm an overview of the Battery 500 Consortium. “The goal of our Battery 500 Consortium is to double the cell-level energy of traditional lithium ion batteries, achieving 500 watt hours per kilogram,” said Xiao, the consortium’s deputy director, an organization that includes four national labs and five universities.

“Our consortium has assembled a team of world-class scientists to work together to advance this future battery technology,” Xiao said, adding that two members are Nobel Prize winners.

At the conclusion of Xiao’s remarks, Granholm said she wanted to read more about PNNL’s battery research.

“If I’m going to be testifying in Congress about what we’re doing on battery research, I’d like to be able to share publicly what I can in a way that’s accessible,” the secretary said.

Powell concluded the presentation by thanking Granholm for federal funding of the Grid Storage Launchpad, expected to be under construction next year and open as soon as late 2023. “All of the battery capabilities are going to move there,” Powell said.

“They are foundational capabilities to support PNNL’s mission to help DOE deliver clean and resilient power systems for 2035 and beyond,” Imhoff said. “The secret sauce here, in terms of the control rooms, is real data and live interconnection scale models. The Office of Electricity helps us procure those assets, and we use those to develop whole new concepts and paradigms for you to run the system.”

Henry Huang, a PNNL lab fellow in electrical engineering, described to the secretary the lab’s efforts to integrate renewable energy sources into the energy grid and prepare the grid for inevitable fluctuations in renewables’ contributions.

“It’s very important for operators to adjust the system when solar goes away or when the wind doesn't blow,” Huang said, also speaking from the control room. “It would be even more important as we're pursuing net-zero (emission) targets. Not just in California, but also for the whole country.”

“VOLTTRON is an open-source, distributed control and assessing software platform,” Spooner said, from an operations center room. “Think of it as kind of like an app on your phone, where you're able to collect data, and then it can make informed decisions. We've deployed it in 16 of our buildings across our campuses. Within these 16 buildings, we have 10,000 sensor points that collect data, and they generate up to 14 million records per day. What we're able to do with those records is take that information and we've reduced the energy use in our buildings between 10 and 20 percent.”

The video visit then left the Richland campus for PNNL’s Seattle office, where Kathleen Judd, a Buildings and Connected Systems group leader, told the secretary about PNNL’s net-zero emissions goal.

“We have some ambitious goals,” Judd said. “Our big goal is to achieve net-zero greenhouse gas emissions with 24/7, carbon-free energy by 2030. In other words, we're not only going to be net zero on average over a year, but our energy will come from clean sources at every hour in the day.”

Judd also said the lab expects to cut its emissions by half by 2024 and reduce emissions by 75 percent and achieve net-zero emissions at the Marine and Coastal Research Facility in Sequim, Washington, by 2027.

Judd told the secretary the net-zero strategy relies on four R’s: replacement, such as converting less efficient energy systems; reduction, with improved technology; resilience, with technology that protects against utility disruption; and research.

“Research shouldn’t be a surprise,” Judd said. “It will underpin all the work that we’re doing.”

At the tour’s conclusion, Ashby acknowledged it had been “a whirlwind tour,” noting that the secretary did not have time to see some of the lab’s other leading capabilities, including biosciences, machine learning, marine and coastal sciences research, and ultratrace radiation detection.

“I really am excited by the areas of research that you have that you guys are doubling down on,” Granholm said, adding that she looked forward to an in-person visit. “Bottom line is I'm just really excited to be able to see it in person. But mostly I’m grateful that you guys are bringing all of this. We're excited to support you continually, and hopefully we can get additional funding which furthers your mission even more.”