A step forward for grid resilience and for storing energy from sun, wind, water 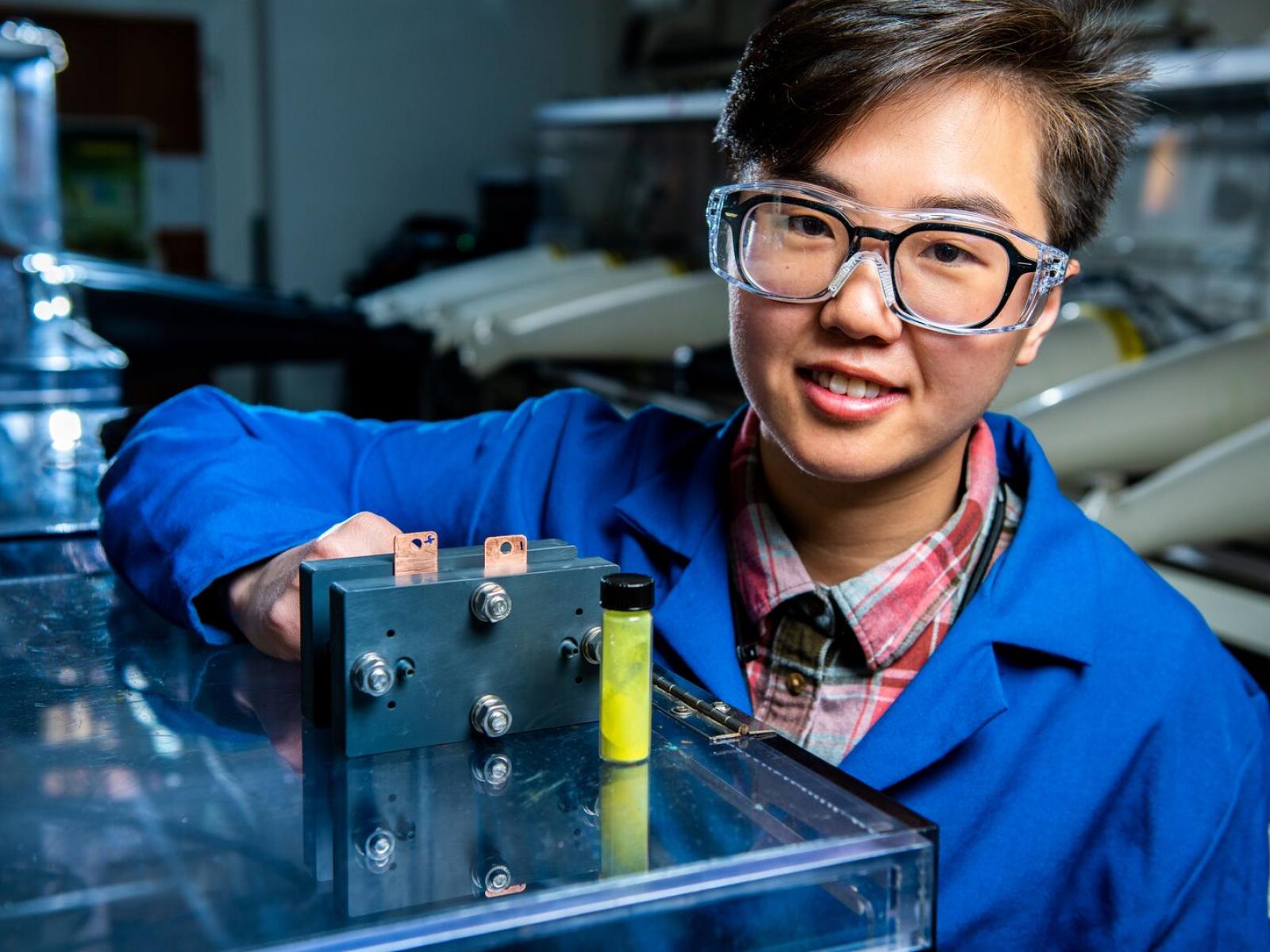 RICHLAND, Wash.—A compound used widely in candles offers promise for a modern energy challenge—storing massive amounts of energy to be fed into the electric grid as the need arises.

Scientists at the U.S. Department of Energy’s Pacific Northwest National Laboratory have shown that low-cost organic compounds hold promise for storing grid energy. Common fluorenone, a bright yellow powder, was at first a reluctant participant, but with enough chemical persuasion has proven to be a potent partner for energy storage in flow battery systems, large systems that store energy for the grid.

Development of such storage is critical. When the grid goes offline due to severe weather, for instance, the large batteries under development would kick in, boosting grid resilience and minimizing disruption. The batteries can also be used to store renewable energy from wind and solar, for use when the winds are quiet or the sun’s not shining.

Details of the research, supported by DOE’s Office of Electricity, are published in the May 21 issue of the journal Science.

“Flow battery technology is a critical part of the Department of Energy’s goal to reduce the cost of grid energy storage over the next decade,” said Imre Gyuk, director of Energy Storage at DOE’s Office of Electricity. “Progress has been rapid, and the cost has come down significantly, but further research is needed to make grid-scale energy storage widely available.”

Scientists are making tremendous strides toward creating better batteries—storing more energy at lower cost and lasting longer than ever before. The results touch many aspects of our lives, translating to a more resilient electric grid, longer-lasting laptop batteries, more electric vehicles, and greater use of renewable energy from blowing wind, shining sun, or flowing water.

For grid-scale batteries, identifying the right materials and combining them to create a new recipe for energy storage is a critical step in the world’s ability to harness and store renewable energy. The most widely used grid-scale batteries use lithium-ion technology, but those are difficult to customize moment to moment in ways most useful to the grid, and there are safety concerns. Redox flow batteries are a growing alternative; however, most use vanadium, which is expensive, not easily available, and prone to price fluctuations. Those traits pose barriers to widespread grid-scale energy storage.

Alternative materials for flow batteries include organic molecules, which are far more available, more environmentally friendly and less expensive than vanadium. But organics haven’t held up well to the demands of flow-battery technology, usually petering out faster than required. Long-term stability of the molecules is important so they maintain their ability to perform chemical reactions for many years.

“These organic materials are made out of the most common materials available—carbon, hydrogen and oxygen,” said Wei Wang, the PNNL scientist who leads the flow battery team. “They are easily available; they don’t need to be mined, as substances like vanadium do. This makes them very attractive for grid-scale energy storage.”

In the Science paper, Wang’s team demonstrated that low-cost organic fluorenone is, surprisingly, not only a viable candidate but also a standout performer when it comes to energy storage.

In laboratory testing that mimicked real-world conditions, the PNNL battery operated continuously for 120 days, ending only when other equipment unrelated to the battery itself wore out. The battery went through 1,111 full cycles of charging and discharging—the equivalent of several years of operation under normal circumstances—and lost less than 3 percent of its energy capacity. Other organic-based flow batteries have operated for a much shorter period.

The flow battery the team created is only about 10 square centimeters, about the size of a large postage stamp, and puts out about 500 milliwatts of power, not even enough to power a cell phone camera. But the tiny structure embodies tremendous promise: Its energy density is more than twice that of the vanadium batteries in use today and its chemical components are inexpensive, long lasting and widely available.

The development was made possible thanks to a team of scientists, including first author Ruozhu Feng, technical lead Xin Zhang and others.

PNNL scientists played an important role in developing the vanadium-based flow batteries used today. A few years ago the team turned its attention to organic molecules because of their broad availability and low cost. In 2018 Zhang joined the team as part of an effort to tune the material for energy storage, bringing deep knowledge of fluorenone from previous research in LEDs.

Fluorenone is also used in solar panels, in pharmaceuticals such as drugs to treat malaria, and in candles, to give them a pleasant scent. It’s inexpensive and readily available as a waste product from coal tar and from the manufacture of benzoic acid, a common food additive.

Zhang focused his attention on fluorenone as the heart of an aqueous (water-based) flow battery, but there were barriers. For one, the molecule wasn’t water-soluble enough. And the molecule hadn’t displayed redox reversibility in aqueous solutions; that is, scientists hadn’t demonstrated that it could both easily accept and donate electrons, two complementary and mandatory steps for a flow battery.

Feng created a series of complex chemical steps—what Wang calls “molecular engineering”—to transform fluorenone to a redox reversible, water-soluble compound. One part of the process has long been easy for fluorenone: to gain an electron in a process known as reduction. But it took dogged chemical persuasion by Feng to bring about the other half of the process—oxidation, the loss of an electron—to make the process reversible and suitable for energy storage.

Unexpectedly, Feng discovered that the ability of fluorenone to carry out reversible reactions is dependent on its concentration—more of the substance dissolved in the water makes the reversibility possible. Scientists hadn’t witnessed the phenomenon with organic molecules before.

“This is a great demonstration of using molecular engineering to change a material from one widely considered impossible for use into something useful for energy storage,” said Wang. “This opens up important new chemical space that we can explore.”

The team also increased the solubility of fluorenone in water, from almost 0 with pristine fluorenone up to 1.5 moles per liter, depending on the modifications to the compound. Solubility in a water-based flow battery is vital; the more the material dissolves in water, the more it’s available as a chemical partner in the swapping of electrons at the heart of the battery.

PNNL is encouraging commercialization of fluorenone-based aqueous redox flow batteries and, as a first step, has filed for a patent on the innovation.

The work on flow batteries is part of a large program at PNNL to develop and test new technologies for grid-scale energy storage. PNNL was chosen earlier this year as the home of the Grid Storage Launchpad, a facility created by DOE’s Office of Electricity to accelerate development and testing of large grid batteries. A chief goal is to increase the use of readily available materials and bring down the cost, making storage of renewable energy possible for longer periods.