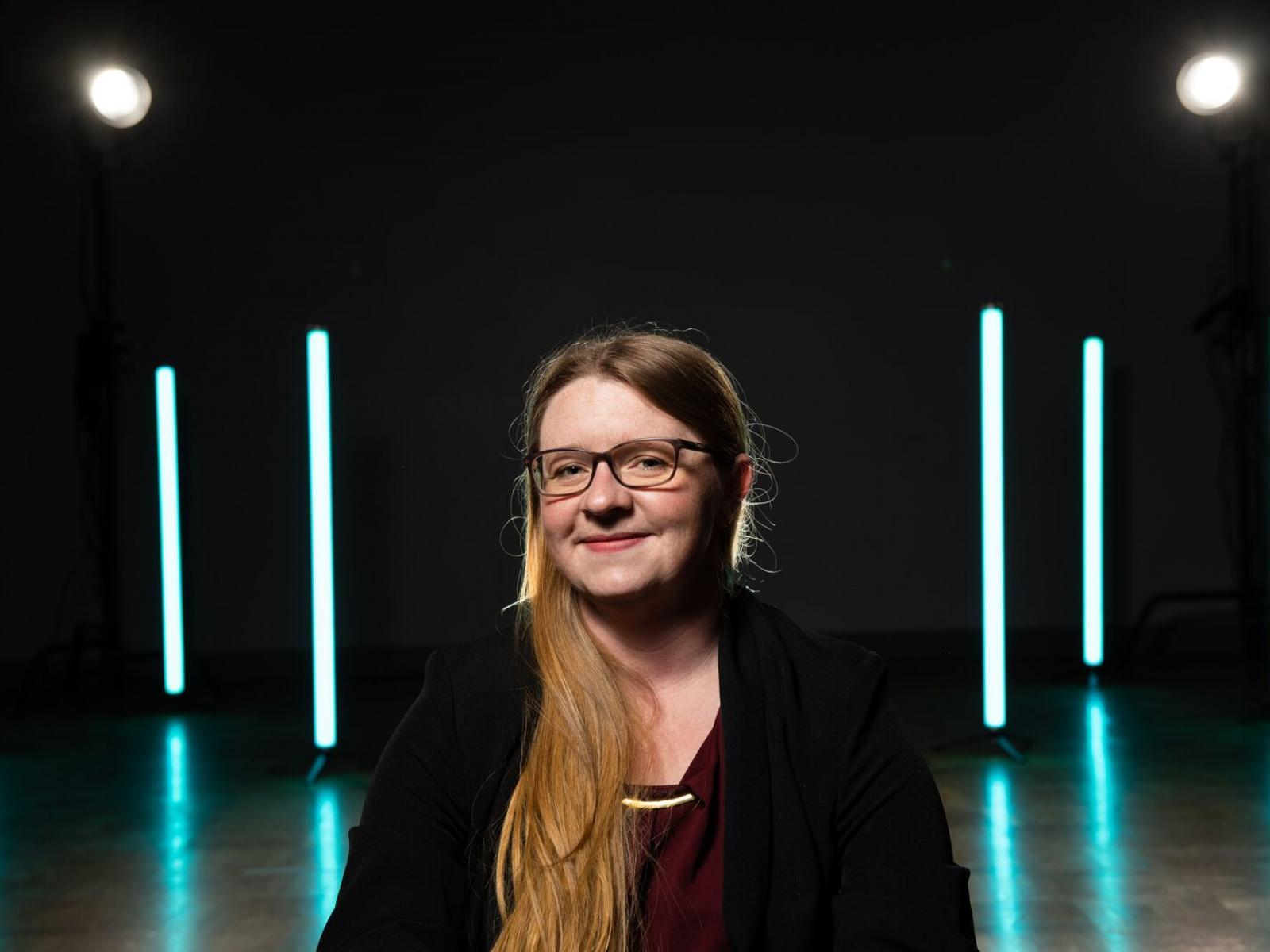 PNNL computational chemist Samantha Johnson creates catalysis models, whether to understand the mechanisms that drive chemical transformations or trying to design new catalysts that are better than those that already exist.

With a high school diploma in hand, Samantha Johnson was ready to celebrate, exchanging high fives with classmates and posing for photos. Then, spotting her guidance counselor, the newly minted graduate walked over for a hug.

“You’re not done,” she told Johnson. “You’re just getting started. You aren’t going to stop until you have a PhD.”

But it was that guidance counselor, Mary Sheedy, who’d wisely suggested—insisted, actually—that Johnson take a chemistry class to satisfy one of Cherokee Trail High School’s International Baccalaureate program requirements. And it was Sheedy who helped steer Johnson, the student from Bennett, Colorado, a tiny town 36 mostly grassy miles east of Denver, to the University of Colorado and a career in chemistry.

Before entering the flagship university, Johnson spent five weeks participating in a summer chemistry research program on the Boulder campus. There, the hook was set. Johnson worked with people with a doctoral degree in science-related fields and others pursuing advanced science-related degrees. Johnson realized that’s what she wanted to do.

Today, Johnson is a computational chemist at Pacific Northwest National Laboratory and among the PNNL scientists preparing to move into the Energy Sciences Center (ESC). The new $90 million, 140,000-square-foot facility, expected to open in late 2021, will provide space for around 200 PNNL researchers, visiting scientists and engineers, and support staff.

Ultimately, Johnson wouldn’t chart a course exclusively inside of a chemistry laboratory. It’s a choice she jokingly suggests was motivated by one too many beaker-breaking mishaps at Colorado. She eventually moved into purely computational work and earned a PhD in materials science at the California Institute of Technology.

Johnson arrived at PNNL in 2017 as a postdoctoral researcher in the Center for Molecular Electrocatalysis, an Energy Frontier Research Center supported by the U.S. Department of Energy. There she used computational chemistry to gain an atomic-level understanding of catalytic materials. She is one of several researchers who identify catalysts that can store energy from intermittent energy sources like solar or wind power. Her work has focused on ammonia oxidation, oxygen reduction, and hydrogen storage on liquid carriers.

Johnson’s primary work in computational chemistry has involved modeling catalysis, whether to understand the mechanisms that drive chemical transformations or trying to design new catalysts that are better than those that already exist. Catalysis will drive much of her work in the ESC.

“One of the projects that I’m working on that directly ties into catalysis is hydrogen storage,” Johnson said, noting that hydrogen is viewed as a very important feedstock for realizing clean energy. Transporting the gas, however, has proven to be a vexing challenge for scientists.

“Sam has a great chemical intuition, so she's a chemist foremost,” Ginovska says, “then she's a computational scientist second. That’s very important in our work environment because our colleagues and collaborators are chemists. So, she really understands every angle of the problems at a very fundamental scientific level. That makes her a fantastic collaborator.”

Collaboration will be an important part of Johnson’s move to the ESC, a building that has been designed to foster cooperation of researchers who previously worked apart in far-flung spaces on the PNNL campus.

Johnson said she’s tried as best she can to collaborate virtually with colleagues while working in her COVID-era routine from the Richland, Washington, home she shares with her husband, Kevin, and cats Molly and Merlin. The day starts with lots of coffee and checking the results of chemical modeling calculations she ran overnight. Then the schedule is filled with launching and finishing calculations, collecting and analyzing data, attending meetings, drafting findings, and reading research papers.

At the ESC, Johnson is likely to continue work studying how the surroundings of a molecule affect its behavior.

“Many of the reactions I study involve proton transfer,” Johnson said. “Hydrogen is made of two protons and two electrons. If we want to use hydrogen, we have to move these protons and electrons around.”

“The process of moving protons and electrons is very sensitive to the surroundings—for example, what other molecules are nearby. The atomic details of these surroundings can affect the efficiency of catalysts to create fuels such as hydrogen or ammonia, using renewable energy such as wind and solar,” she said. “Once we understand the precise details of that process, I wonder: How can we change molecular catalysts to make them do the types of activation reactions we want to do?”

Just as catalysts are affected by their surroundings, so too are chemists. As such, Johnson is looking forward to the upcoming return of in-person collaboration. The ESC will enhance that component because collaborators who previously were scattered throughout several PNNL buildings will now be under one roof, if not just next door or down the hallway. Perhaps even more important, an afternoon walk with Ginovska will be reality or an in-person update from office mate and PNNL biochemist Joe Laureanti about his two young daughters.

“Sam is one of my favorite people at the lab,” says Laureanti, who sometimes works with Johnson as a laboratory science, technology, engineering, and mathematics (STEM) ambassador, a shared interest in sparking high school students’ science interest. Johnson and Laureanti also will share an office in the ESC. “She's just someone that you can go and talk to, whether it's about work or life.”

Johnson, a bicycling and Ultimate Frisbee aficionado, likes to joke that “some of the best science—and scientific solutions—are discussed over coffee.”

But solutions, she acknowledged, are sometimes a slog that is best navigated with long-term vision. Johnson believes victories, no matter how seemingly insignificant, should be acknowledged.

“I think we, as scientists, don't do a good enough job of celebrating the small successes,” she said. “Setbacks can be tough. If something doesn’t work, you may think, ‘Dang. Maybe I messed something up.’”

Johnson recalled a victory earlier this year. Armed with new software, Johnson was trying to see a proton transfer in water molecule networks. It had been a vexing problem.

She talked often with Ginovska about how to approach the problem.

“She had been analyzing clusters of water networks,” says Ginovska. “She couldn't understand why, in her analysis, things that she would assume would show up as hydrogen-bonded clusters were not showing up. We talked about what could be the issue. We kind of went back and forth on different things she could look at.”

Finally, she decided that she should take a closer look at some of the limitations of the software and perhaps explore different software.

“We wanted to see whether the software could help see some phenomena—a proton transfer between two water molecules,” she recalled.

“And it worked! And I said, ‘Oh, this is actually really exciting!’” Johnson said, laughing. “I took a screenshot and I sent it to Bojana. And I said, ‘Look at this! How about that?!’ Now that, that was really fun. We’re still using that software. I’m writing a paper about the process.”

Johnson has been interested in renewable resources and their potential for clean energy since high school days. On a grander scale, she hopes her strides—and the bigger team advances that arise from interactions enabled by the ESC—will contribute to clean, reliable energy storage.

“That’s the big societal problem I’m working on,” Johnson said. “On a smaller scale, I’m interested in what makes these catalysts tick, how can we make a better one. But bigger scheme? We’re looking for catalysts that help this energy storage. Ultimately, this is research that will help people, the environment, and the economy.”