Towards Understanding and Advancing the Catalytic Chemistry of Plastics Upcycling

The Institute for Integrated Catalysis at Pacific Northwest National Laboratory is organizing a series of six lectures with the focus on understanding and advancing catalytic chemistry for the upcycling of plastics. This critical area has become one of the fastest-growing branches in catalytic research.

In this series, we will focus on a broad range of chemistries that will include activation of carbon-carbon, carbon-hydrogen, and carbon-heteroatoms bonds relevant to plastic deconstruction, and on the prospects for the synthesis of renewable, biodegradable plastics. The goal is to stimulate discussion among catalysis experts with different expertise and to broaden our community's understanding of scientific challenges associated with the upcycling of plastics.

We have an outstanding lineup of speakers who will outline their scientific strategy, present their research, and set their work into the broader context of this critical area. Each lecture (approximately 45 minutes) will be followed by an extended discussion (up to 30 minutes) to allow ample time for questions and to stimulate dialog among the participants. The planned timeframe for the lectures is from October 20 through November 23, 2020, with one lecture per week. You can sign up for each lecture by clicking the link next to the presentation. All the webinars are being held at 10 a.m. Pacific time (11 a.m. Mountain, Noon Central, 1 p.m. Eastern times).

Design of a Processive Catalyst for the Upcycling of Polyethylene

Sadow will share results from their team’s studies on the interactions between polymers and heterogeneous catalysts using solid-state NMR spectroscopy to design catalytic materials that affect the process by which larger macromolecules are deconstructed into a distribution of smaller molecules. Solid-state (SS) 13C NMR spectroscopic methods show that conformations of polyethylene chains, and dynamic properties of conformational domains, are affected by the three dimensional properties of solids upon which the polymer is adsorbed. 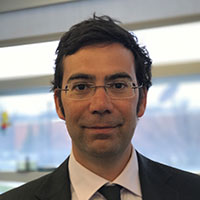 Sadow received his B.S. in 1997 from Pennsylvania State University, where he worked in the group of Prof. Ayusman Sen on palladium-catalyzed co- and terpolymerizations. He earned his Ph.D. from the University of California, Berkeley in 2003 under the guidance of Prof. T. Don Tilley, primarily focused on the development of new catalytic C–H bond functionalizations. Following postdoctoral work at the Swiss Federal Institute of Technology (ETH Zürich) with Antonio Togni investigating catalytic asymmetric hydroamination and hydrophosphination, Aaron joined the chemistry faculty at Iowa State University. He was promoted to associate professor in 2011, and to professor in 2016.

A presentation on the development of catalytic functionalizations of the C-H bonds of polyolefins. Applications of homogeneous systems that catalyze the borylation and oxidation of C-H bonds as a means to enable changes in properties and more deep-seated changes to structure will be included in this talk. 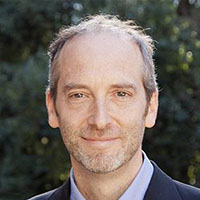 Catalytic conversion of polyolefins to alkylaromatics

Scott will discuss how a successful circular plastics economy will depend on the ability to create value from commodity plastics in ways that mechanical recycling has not delivered. Chemical strategies to disassemble polymers must take into account thermodynamic and kinetic barriers, and target products of higher value. Scott will describe a strategy to obtain valuable alkylaromatics from polyethylene without the need for large inputs of energy or chemical resources, by coupling reactions that create and consume hydrogen. 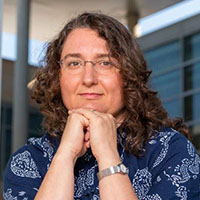 Scott received her Ph.D. in Inorganic Chemistry from Iowa State University, under the direction of Jim Espenson and Andreja Bakac, for work on the activation of O2 and transition metal-catalyzed oxidation mechanisms. She was a NATO Postdoctoral Fellow with Jean-Marie Basset at the Institut de recherches sur la catalyse (CNRS) in Lyon, France, before joining the faculty of the University of Ottawa (Canada) in 1994, and where she was named a Canada Research Chair. In 2003, she moved to the University of California, Santa Barbara, where she currently holds the Duncan and Suzanne Mellichamp Chair in Sustainable Catalysis and is Chair of the Santa Barbara Division of the Academic Senate.

This lecture will discuss the catalytic solvolysis processes that convert various plastics to value-added products such as monomers or hydrocarbon fuels and lubricants. Furthermore, a sequential catalytic solvolysis process, in which an individual polymer or classes of polymers in a plastic mixture is selectively deconstructed stage-by-stage, is designed. This novel process may enable chemical upcycling of comingled plastic wastes without laborious physical sorting.

Lin is an Associate Professor in the Voiland School of Chemical Engineering and Bioengineering at Washington State University. He received his Ph.D. degree in Chemical Engineering from Louisiana State University and has been a postdoctoral fellow at the University of California, Santa Barbara.  Dr. Lin’s research is to incubate innovative chemical catalysis technologies for tackling current and future energy and environmental challenges. Topics of current interest include chemical upcycling of waste plastics, biomass to chemicals and fuels, CO2 capture and utilization, chemical hydrogen storage, etc. He is the international advisory board member of Energy Technology and the past program chair of the Energy and Fuels Division of the American Chemical Society (ACS).

A discussion on recent efforts in using CO2 as a soft oxidant to activate light alkanes such as ethane and propane. Using a combination of kinetic studies, in situ characterization and DFT calculations, Chen will discuss how his group has identified several classes of selective catalysts that can break the C-C bonds to produce synthesis gas or the C-H bonds to produce olefins. He will also demonstrate the feasibility to further upgrade the syngas/olefin product mixture to value-added oxygenates and aromatics using cascade reactions and tandem reactors. 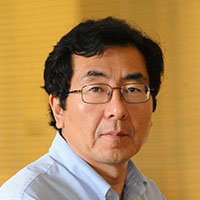 Chen is the Department Chair and Thayer Lindsley Professor of Chemical Engineering at Columbia University, with a joint appointment at Brookhaven National Laboratory. He received his PhD from the University of Pittsburgh and carried out his Alexander von Humboldt postdoctoral research in KFA-Julich in Germany. After spending several years as a staff scientist at Exxon Corporate Research Laboratories, he started his academic career at the University of Delaware and rose to the rank of the Claire LeClaire Professor of chemical engineering.  He moved to Columbia University in 2012.

Carbo-chemicals in the circular economy

This lecture will discuss the options to transform todays’ linear petrochemical industry into a circular ‘carbo’chemical industry by increasing the share of recycled plastic and renewable carbon (biomass and CO2) and by decreasing that of fossil resources, which need to be offset by CCS. 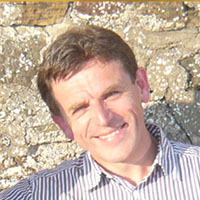 Lange is principal research scientist at Shell Projects & Technology in Amsterdam, the Netherlands, where he has been exploring novel catalytic processes for producing fuels and chemicals from natural gas, oil, biomass and, most recently, waste plastic. His research expertise resides in heterogeneous catalysis, combined with chemical engineering, conceptual process design and manufacturing economics. He is also Professor in Chemical Biorefining at the University of Twente, the Netherlands, where he is investigating thermochemical routes for converting biomass to fuels and chemicals.