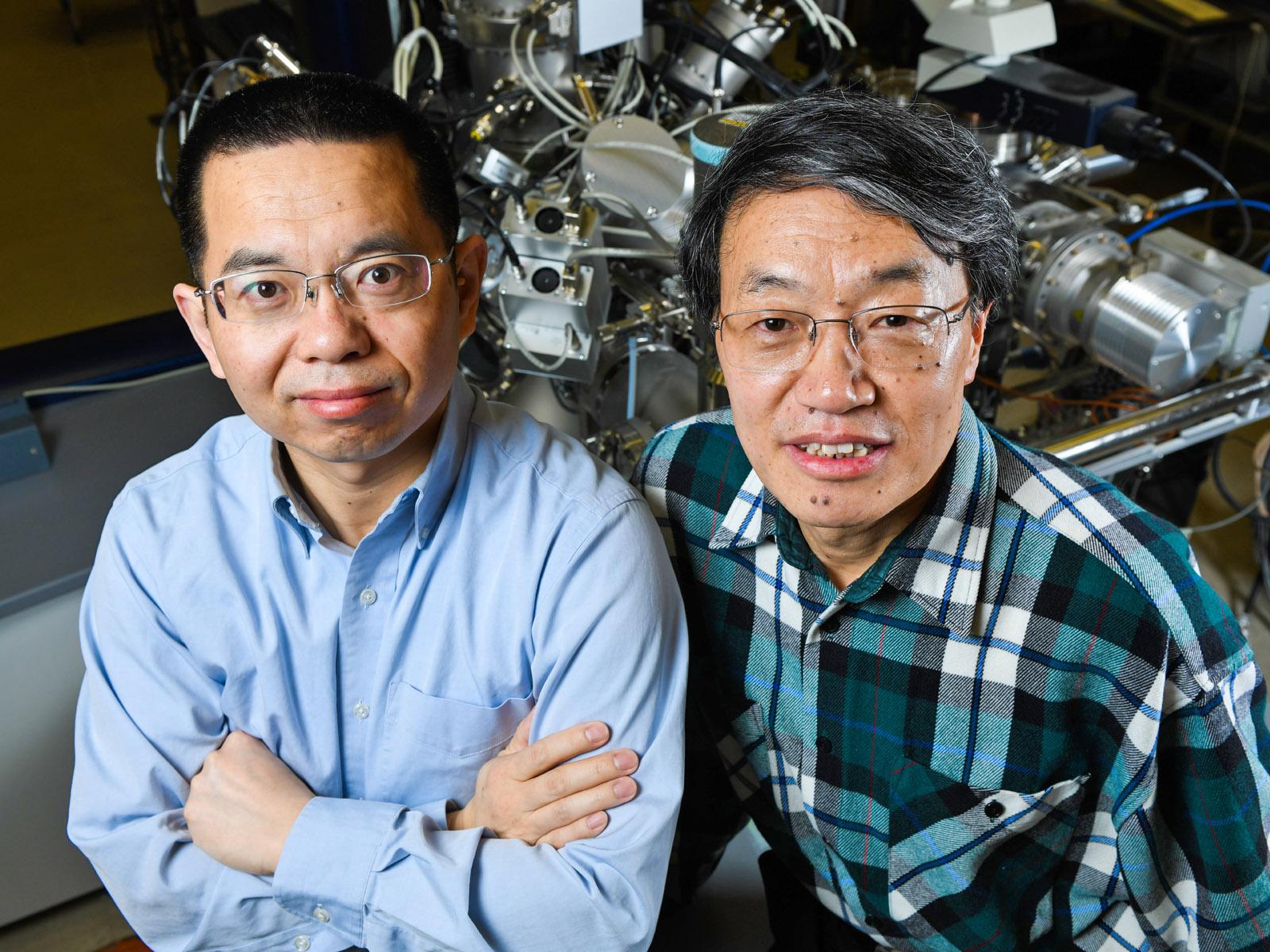 Zihua Zhu and Chongmin Wang are part of the team that learned crucial new information about the creation of a key component of lithium-ion batteries.

The first hours of a lithium-ion battery’s life largely determine just how well it will perform. In those moments, a set of molecules self-assembles into a structure inside the battery that will affect the battery for years to come.

This component, known as the solid-electrolyte interphase or SEI, has the crucial job of blocking some particles while allowing others to pass, like a tavern bouncer rejecting undesirables while allowing in the glitterati. The structure has been an enigma for scientists who have studied it for decades. Researchers have tapped multiple techniques to learn more but never — until now — had they witnessed its creation at a molecular level.

Knowing more about the SEI is a crucial step on the road to creating more energetic, longer-lasting and safer lithium-ion batteries.

Why lithium-ion batteries work at all: the SEI

The solid-electrolyte interphase is a very thin film of material that doesn’t exist when a battery is first built. Only when the battery is charged for the very first time do molecules aggregate and electrochemically react to form the structure, which acts as a gateway allowing lithium ions to pass back and forth between the anode and cathode. Crucially, the SEI forces electrons to take a detour, which keeps the battery operating and makes energy storage possible.

It’s because of the SEI that we have lithium-ion batteries at all to power our cell phones, laptops and electric vehicles.

But scientists need to know more about this gateway structure. What factors separate the glitterati from the riffraff in a lithium-ion battery? What chemicals need to be included in the electrolyte, and in what concentrations, for the molecules to form themselves into the most useful SEI structures so they don’t continually sop up molecules from the electrolyte, hurting battery performance?

Scientists work with a variety of ingredients, predicting how they will combine to create the best structure. But without more knowledge about how the solid-electrolyte interphase is created, scientists are like chefs juggling ingredients, working with cookbooks that are only partially written.

To help scientists better understand the SEI more, the team used PNNL’s patented technology to analyze the structure as it was created. Scientists used an energetic ion beam to tunnel into a just-forming SEI in an operating battery, sending some of the material airborne and capturing it for analysis while relying on surface tension to help contain the liquid electrolyte. Then the team analyzed the SEI components using a mass spectrometer.

The patented approach, known as in situ liquid secondary ion mass spectrometry or liquid SIMS, allowed the team to get an unprecedented look at the SEI as it formed and sidestep problems presented by a working lithium-ion battery. The technology was created by a team led by Zhu, building on previous SIMS work by PNNL colleague Xiao-Ying Yu.

“Our technology gives us a solid scientific understanding of the molecular activity in this complex structure,” said Zhu. “The findings could potentially help others tailor the chemistry of the electrolyte and electrodes to make better batteries.”

The PNNL team connected with Kang Xu, a research fellow with the U.S. Army Research Laboratory and an expert on electrolyte and the SEI, and together they tackled the question.

The scientists confirmed what researchers have suspected — that the SEI is composed of two layers. But the team went much further, specifying the precise chemical make-up of each layer and determining the chemical steps that occur in a battery to bring about the structure.

The team found that one layer of the structure, next to the anode, is thin but dense; this is the layer that repels electrons but allows lithium ions to pass through. The outer layer, right next to the electrolyte, is thicker and mediates interactions between the liquid and the rest of the SEI. The inner layer is a bit harder and the outer later is more liquidy, a little bit like the difference between undercooked and overcooked oatmeal.

The role of lithium fluoride

One result of the study is a better understanding of the role of lithium fluoride in the electrolyte used in lithium-ion batteries. Several researchers, including Kang Xu, have shown that batteries with SEIs richer in lithium fluoride perform better. The team showed how lithium fluoride becomes part of the inner layer of the SEI, and the findings offer clues about how to incorporate more fluorine into the structure.

“With this technique, you learn not only what molecules are present but also how they’re structured,” Wang says. “That’s the beauty of this technology.”

The PNNL portion of the research published in Nature Nanotechnology was funded by PNNL, DOE’s Office of Energy Efficiency and Renewable Energy’s Vehicle Technologies Office, and the U.S.-Germany Cooperation on Energy Storage. Kang Xu’s work was funded by DOE’s Office of Science Joint Center for Energy Storage Research. The liquid SIMS analysis was done at EMSL, the Environmental Molecular Sciences Laboratory, a DOE Office of Science user facility located at PNNL.