Probing How Microbiomes Affect Our Health

Customized chemical probes tag proteins that interfere with cancer treatments, among other things 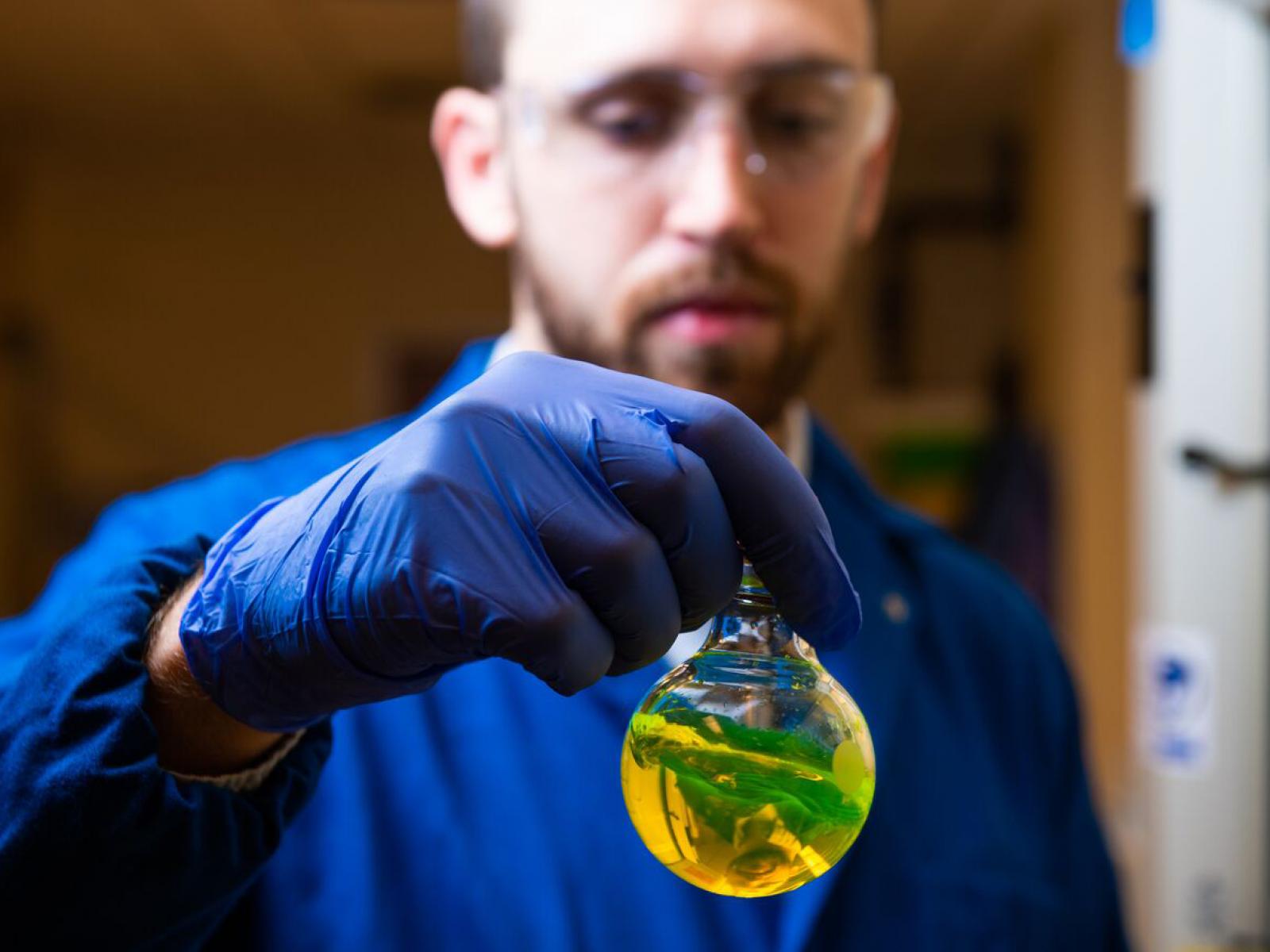 PNNL scientists design and build chemical probes to understand the role of active proteins in cells and microbiomes.

More than half the cells on or in our bodies are microbes. Microbes help us digest food, affect our moods, and defend against invading pathogens.

For almost 20 years, scientists have been connecting how our complex communities of microbes—called the microbiome—are essential for health and how they are linked to disease.

Now they want to probe exactly what the microbes inside our bodies are doing in there. Scientists are starting to understand that information about microbial function in someone’s gut, for example, could provide specific information about a patient’s health. Tailoring treatments based on personal markers of health or disease is the foundation for the future of medical care known as precision medicine.

“We can use the same chemical probe to measure the amount of activity in a mixture of microbial enzymes, in live cells, and in a collection of microbes in a community,” Wright said. The PNNL team has developed some of these molecular tools to be commercialized for future clinical diagnostics.

“One of the licensed chemical probe platforms has been tailored to analyze human stool samples for specific gut microbiome activity that can impact cancer treatment outcomes,” said Jennifer Lee, commercialization manager at PNNL. “Information from the PNNL platforms could also help doctors refine their therapeutic guidance for gastrointestinal disease and immunological disorders.”

For any cell, proteins perform the work that keeps it functioning. This work often involves performing specific chemical transformations involved in metabolism or cell signaling. But just because a protein is present in a cell doesn’t mean it’s active at a particular time. The PNNL researchers have a way to tag active proteins, called activity-based protein profiling.

“First we design a chemical probe to be molecular bait for active proteins that perform a given transformation,” Wright said. “Then we label the bait so we can fish it out of the complexity in a microbial community.”

One of the recently licensed chemical probe platforms detects a microbial protein that causes side effects from certain medicines. Just as our own cells process medicines we take to treat symptoms or disease, microbes in our gut process those medicines too. When gut microbes produce the enzyme beta-glucuronidase, their metabolism can cause problems.

Here's why: As human cells process a medicine, they attach a particular sugar to it to mark it for removal. Some bacteria in the gut produce beta-glucuronidase. When the sugary medicine reaches these bacteria, that enzyme chops off the sugar. The result is that a drug keeps circulating in the body for longer than intended, which can lead to side effects.

For example, the drug irinotecan is a first-line drug for colorectal cancer because it is very effective. However, if a patient has increased levels of beta-glucuronidase from their gut microbiome, then a side effect of this drug is severe diarrhea. It can take weeks of lost treatment time to switch someone to other medicines that are not affected by beta-glucuronidase.

To build a chemical probe to detect beta-glucuronidase activity in a diagnostic test, PNNL scientists first developed a molecule that resembles the sugar that this enzyme recognizes. To detect where the probe bound, the scientists add a fluorescent label to the sample. This label clicks onto the enzyme-bound probe and glows. Scientists then measure the amount of fluorescence from a sample to quantify the amount of active beta-glucuronidase.

The team has refined their probes and sample preparation techniques to use this platform with human stool samples. Continued research and development through this licensing is working toward transforming the approach from laboratory experiment into a reliable diagnostic test for the clinic.

The strength of PNNL’s chemical probe technology is in detecting and quantifying the amount of protein activity in complex samples such as microbiomes. Measuring cell function on various scales provides molecular details about how living systems work together, whether they’re microbes in a human gut or soil microbes decomposing leaf litter.

Wright and his colleagues have previously developed probes to identify enzymes in soil microbes that break down cellulose, the component of plants desired for biofuel production. They have also developed probes that mimic common B vitamins to help understand how these nutrients shape the composition of environmental and human microbiomes.

For human health applications, PNNL researchers have used these probes to follow how fatty foods affect liver or lung metabolism in ways that could affect how the body processes medicine. They have tracked how key detoxifying enzymes in liver and lung tissue also change function with age or after exposure to environmental contaminants, illicit drugs, or dietary changes. And, they currently study how antibiotics affect the workings of the gut microbiome and how gut microbes could influence our body’s internal clock.

The team is currently collaborating with researchers at the University of Delaware to study how gut microbe activity in mealworms might be harnessed to degrade plastic. And, a team of researchers from around PNNL are exploring how to combine fluorescent chemical probes with automated analysis of microscopy images to detect pathogenic bacteria in soil.

Learn more about licensing chemical probe platforms for other applications that sort microbes by function.

This work has been primarily supported by the Department of Energy, Office of Science, Biological and Environmental Research program; the National Institutes of Health; and Cooperative Research and Development Agreements.