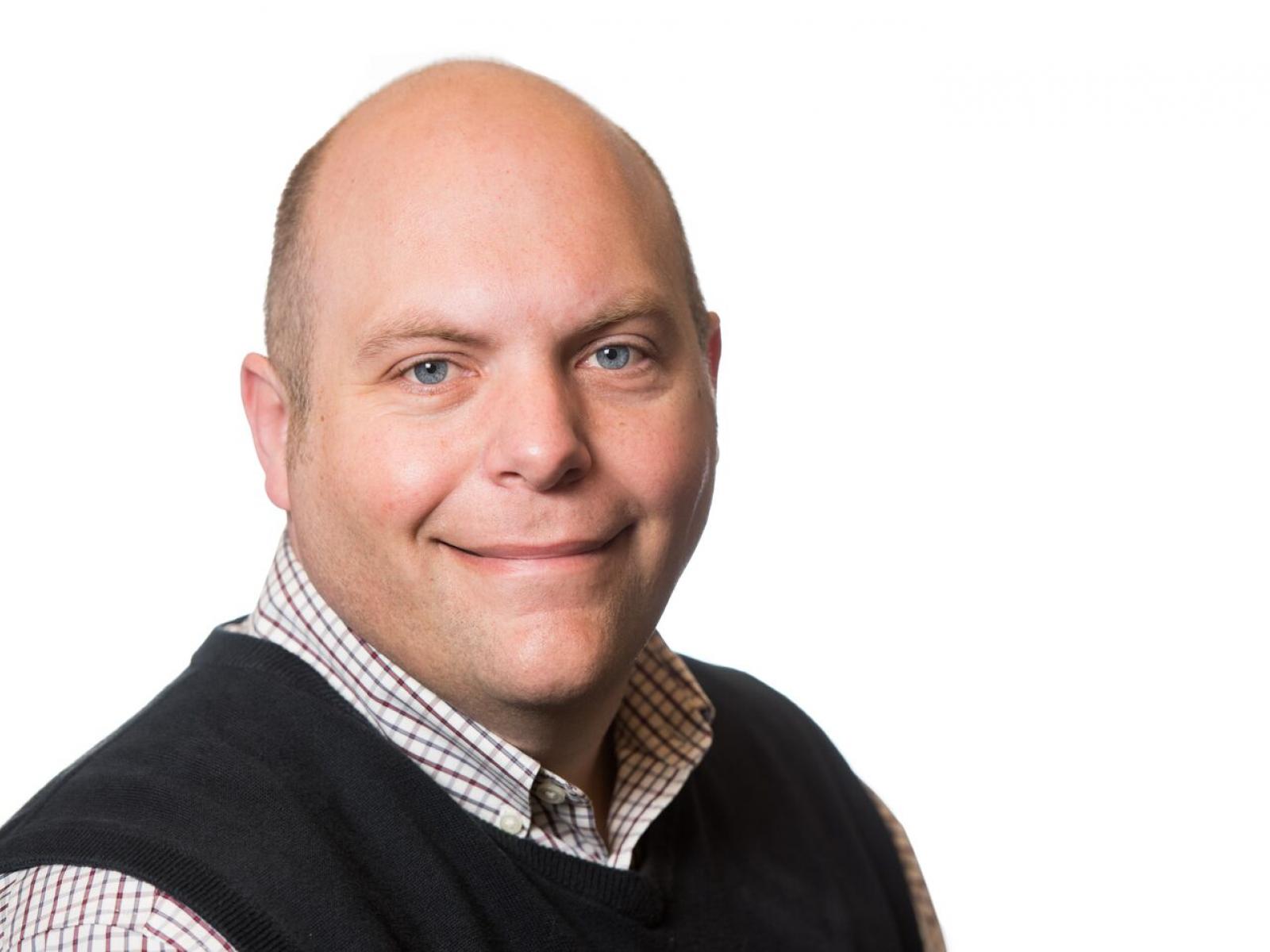 Aaron Wright is a senior scientist leading the Biological Systems Science Group in the Biological Sciences Division at PNNL. He has a joint appointment as a research professor in the Gene and Linda Voiland School of Chemical Engineering and Bioengineering at Washington State University (WSU) and an adjunct faculty appointment with the School of Molecular Biosciences at WSU. Wright earned his PhD in organic chemistry from the University of Texas at Austin with professor Eric Anslyn performing research on host-guest sensors for small molecules, peptides, and proteins relevant to biomedical applications. Realizing the potential of synthetic chemistry to answer biological questions, Wright completed a California Breast Cancer Research Program postdoctoral fellowship with professor Benjamin Cravatt at the Scripps Research Institute. While there, his research focused on the general areas of chemical biology and activity-based protein profiling (ABPP), with an emphasis on cytochrome P450 oxidative metabolism.

About the Biological Systems Science Group

Wright’s highly collaborative and diverse chemical biology research team is focused on gaining an improved functional and mechanistic understanding of biological processes including:

To improve understanding of biological processes, the team synthesizes chemical probes that are coupled to high sensitivity omics, imaging, and other analytics, in addition to 'traditional' microbiology, genetics, and molecular biology experiments. Wright’s team is a talented composite of biologists, chemists, and chemical biologists and includes research staff, postdoctoral and post-bachelor research associates, graduate students (from WSU), and undergraduate interns working closely with PNNL. 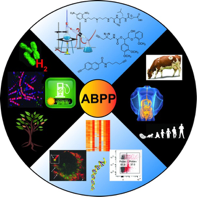 The team develops and deploys active-site, modification-directed, or metabolite-based chemical probes that form irreversible bonds to protein targets in microbes, microbial communities, and mammalian cells and tissues, and subsequently report on probe labeling events by mass spectrometry (MS)-based proteomics, imaging, or flow cytometry. Strengths include: synthetic organic chemistry for probe development, chemoproteomics, environmental, and human health biology. At the simplest level, team members can summarize research as applying chemical probes to living biological systems or cellular extracts, then append enrichment moieties or fluorescent groups via click chemistry for subsequent liquid chromatography mass spectrometry or imaging characterization of probe labeling, (Scheme 1) resulting in an improved functional and mechanistic understanding of biological processes. Below are descriptions of some ongoing projects. Two reviews published in Current Opinion in Chemical Biology and in Biotechnology for Biofuels show the role activity-based protein profiling has on understanding biological functions, interactions, and regulatory dynamics of microbes and microbial communities.

Understanding how host, microbiome, and xenobiotic exposure all interact could guide the development of therapies to mitigate exposure risk or damage. However, the sheer diversity of the gut microbiome makes it difficult to identify the molecular mechanisms underlying specific interactions.

To address this, the team is developing an approach to isolate and identify the microbes and proteins involved in different functions using activity-based probes, and to correlate changes to those functions upon perturbation of the gut microbiome. These small molecules can be used to covalently label only active, functional enzymes within a population.

With the goal to move away from gene- and transcript- based omics and directly measure gut microbiome enzyme activities, the team anticipates providing key information used to develop and guide future therapies.  A recent review co-authored with others explores new technologies for characterizing microbiomes (ACS Nano, 2016). 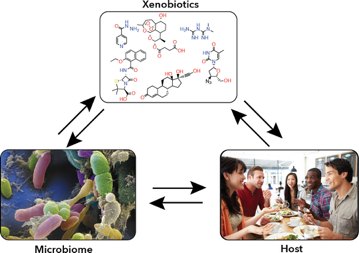 Scientists from PNNL are engaged in research to understand how oxidative and conjugative (Phase I and II, respectively) metabolic activities in the liver and lung change as a function of age and/or exposures (for example, exposure to polyaromatic hydrocarbons). Specifically, the team is researching organ-level responses to persistent environmental contaminant exposure, drugs, and diet.

In addition, novel chemical probes for phase II enzymes are being developed and used alongside existing probes for cytochrome P450 enzymes. An initial study determined the effects on P450 functional activity during pregnancy due to exposure to dibenzo[def,p]chrysene in mice (Toxicol Sci. 2013, 135, 48-62). The team followed this study by characterizing human liver P450 activity in samples ranging from prenatal to old age (Drug Metabolism and Disposition, 2016).

Currently, the team is working to submit a manuscript on research exploring perturbations to P450 activity due to the combination of obesity and smoking.

Results will inform pharmacokinetic modeling and will help understand the metabolic and health implications of individual chemicals and environmentally relevant mixtures. 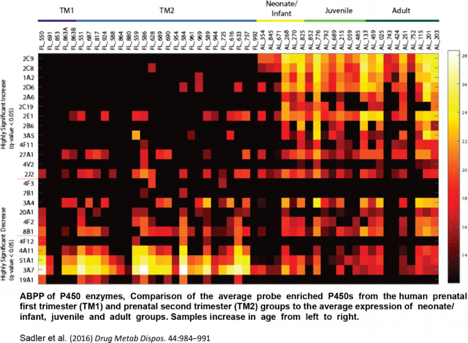 Nutrient trafficking is a driving force influencing the biogeochemical networks established by microbial communities under metabolic flux. It promotes unique interdependent relationships among microbial members in thriving ecosystems.  B-vitamin auxotrophy and opportunism is one of many nutrient-dependent mechanisms with the power to elucidate the evolutionary dynamics behind microbial community structure, resilience, and resistance to perturbations.

Probes provide a unique opportunity to directly link cellular activity and protein function back to native ecosystems and/or host dynamics. The probes do this by targeting protein interactions and vitamin-dependent regulatory functions.

Live-cell activity and affinity-based probes to allow for multimodal downstream techniques that generate high-throughput functional protein data. These probes are parallel to relative global abundance, transcriptomics, confocal laser microscopy, and cell-sorting techniques. They accurately assign function and specificity for a wide range of experimentally unidentified and predicted membrane-embedded transport proteins, as well as the functional characterization of the intracellular vitamin cofactor-dependent pathways they impact.

Soil microbiomes are essential to environmental nutrient cycling, yet their response to perturbations driven by climate change are still incredibly vague.

The team is investigating the roles hydraulic connectivity and spatial structure have on niche differentiation in the context of substrate availability, the distribution of taxa in soil micro-habitats, and the metabolic capacity of community members. An activity-based protein profiling will be deployed to target enzymes responsible for organic matter decomposition related to nutrient cycling in the environment. This will tease out community member function in varied conditions. These experiments will be used to inform predictive models of soil microbiomes. This work builds off of prior experience in characterizing cellulose and protein degradation—for example, Ser and Cys proteases (J. Am. Chem. Soc. 2012, 134, 20521-32; Molecular BioSystems, 2013, 9, 2992-3000). A project funded by the U.S. Department of Energy, Office of Science, Biological and Environmental Research program will evaluate soil microbial community mechanisms for C acquisition, how these alter community composition and function, and how environmental perturbations impact the communities.

The team is studying the importance of redox regulation and dynamics on cysteine thiols of the proteins involved in key photosynthetic and metabolic modules within the photoautotrophic cyanobacteria, Synechococcus sp. PCC 7002 and Cyanothece sp. 51142.

Cysteine thiols are susceptible to a range of oxidative modifications, which make them a powerful chemical agent for signaling and regulatory processes in microbes. Additionally, cysteine thiol reduction and oxidation (redox) is a common mechanism used by microbes to sense environmental perturbations and initiate responses.

Photosynthetic cyanobacteria are of great interest because of their potential to generate biofuels. But the regulatory redox dynamics of protein cysteine thiols must first be understood in order to fully realize their capacity.

Proteins involved in critical metabolic pathways, including those important to the synthesis of high-value small molecules, biofuel precursors, and/or hydrogen are hypothesized to have widespread regulation. A critical caveat to investigating thiol redox status is the limitation imposed by cell lysis, in which near-immediate oxidation upon lysis destroys the native redox status.

Thus far, the team has investigated redox dynamics in multiple nutrient conditions, including C and N limitation, high light, and oxidative stress. They have also been able to identify changes to cysteine thiol redox status in as little as 30 seconds in living cells following an environmental perturbation.

By parsing proteins that undergo redox reactions and those highly sensitive to reactive oxygen species stress from the rest of the proteome, a fuller understanding of photoautotrophic regulatory dynamics can be achieved. To validate and extend our redox probing, we have also carried out complementary global proteomic, transcriptomic, confocal laser microscopy (See figure 3), and photophysiology measurements.

In total, this comprehensive approach provides a more thorough understanding of redox signaling that will facilitate optimization of photosynthetic cellular output. Work in this area was covered in Chemical & Engineering News.

Microbial degradation and fermentation of lignocellulosic biomass is a key strategy being investigated in renewable energy research. Cellulolytic microbes and microbial communities are capable of producing β-glucosidases, endo- and exoglucanases, and other glycoside hydrolases to facilitate the degradation of highly recalcitrant cellulose and related plant cell wall polysaccharides. Towards this end, the team developed a large suite of activity-based probes for identifying the functional enzymes involved in cellulose deconstruction published in the J. Am. Chem. Soc, 2012. This suite of probes has been applied to characterize the functional assemblage of the cell-adherent cellulosome structure in the anaerobic bacterium Clostridium thermocellum, and to rapidly identify alterations to cellulolytic activity upon industry- and biorefinery-relevant perturbations in the established biofuel platform production fungi Trichoderma reesei (Molecular Biosystems, 2013).

Most recently, they have worked closely with Michelle O’Malley of University of California, Santa Barbara to perform proteomic analyses of fungal lignocellulose degraders. This research resulted in a publication in Science 2016 characterizing a fungal cellulosome system. A follow-on study is in review. Below, Figure 3, shows a general schematic of how we want to use chemical probes and other experiments to understand microbe and microbiome lignocellulose degrading activities. This work ties in with the soil studies described above. 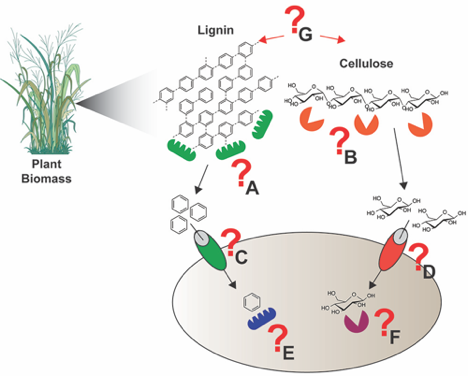