Two researchers elected to Washington State Academy of Sciences; two others join the academy board. 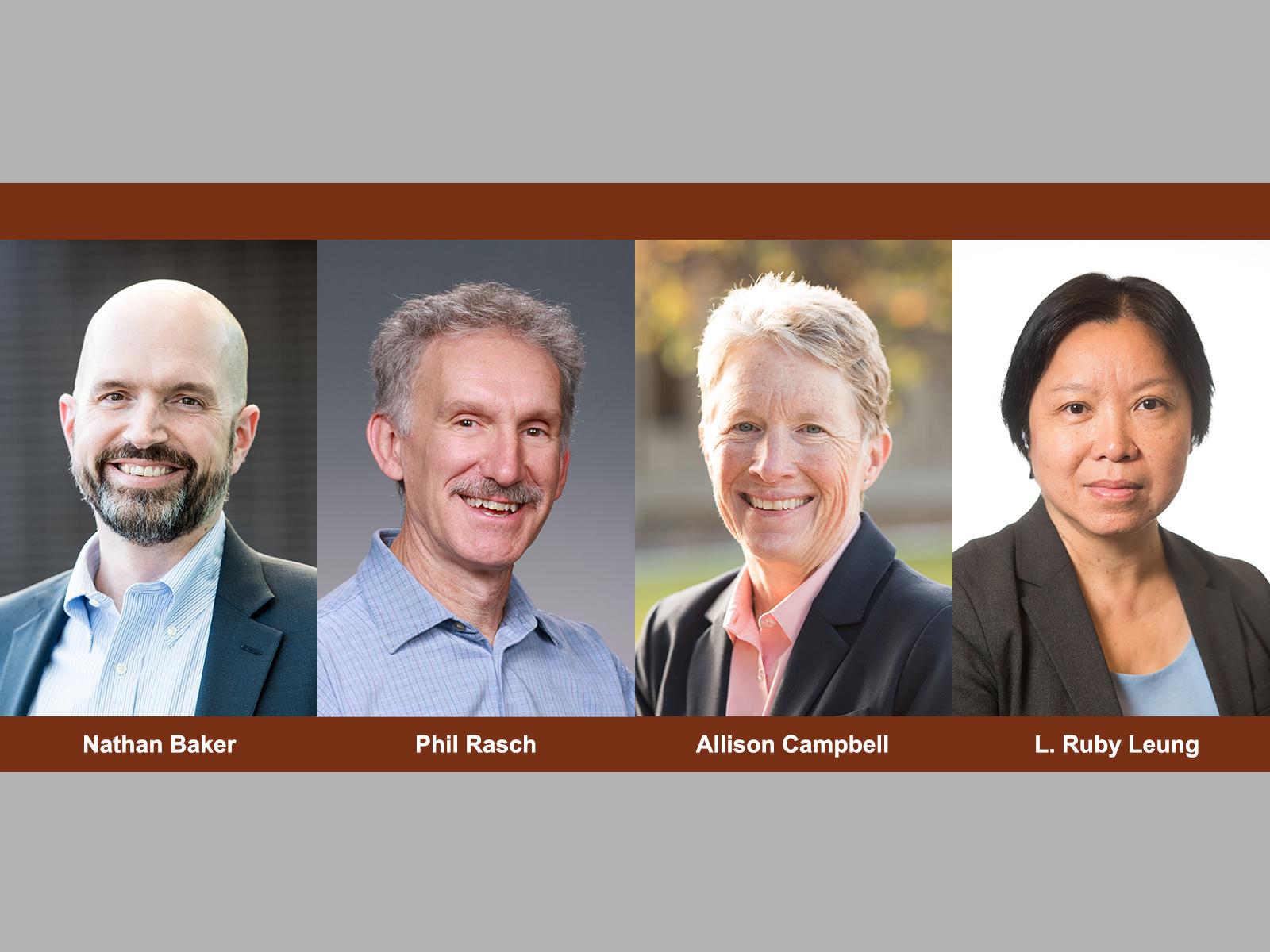 RICHLAND, Wash.—Nathan Baker and Phil Rasch, data and climate scientists at the U.S. Department of Energy’s Pacific Northwest National Laboratory, will join other top scientists and engineers as new members of the Washington State Academy of Sciences.

Membership is an honor but also a commitment, as WSAS directs its members to help solve some of the most vexing problems facing Washington state. They are asked to share their skills to help inform policy making decisions and to increase the role and visibility of science among the public.

PNNL now has a total of 25 WSAS members. Two of those previously elected, Allison Campbell and L. Ruby Leung, will now serve on the WSAS board of directors.

Nathan Baker is a data scientist working on problems in applied mathematics and biophysics, among other computational endeavors. He has developed new algorithms which support scientific research in other areas such as chemistry and biology. Internationally known for his leadership in physical and computational sciences, Baker has authored more than 100 peer-reviewed publications and has been an invited speaker at scientific conferences, workshops, and seminars around the world.

Baker is a laboratory fellow—the highest researcher rank at PNNL—and is a University of Washington-PNNL distinguished faculty fellow and a joint appointee at UW. Baker works closely with leading researchers in computer science, applied mathematics, and quantum computing at UW, Washington State University, and Microsoft to grow quantum information sciences research in Washington state. He has briefed the Washington State Senate. Baker has been a member of many local boards and associations, and currently is a board member of the Columbia Basin College Foundation.

Phil Rasch is internationally known for his expertise in atmospheric chemistry and climate modeling, with a focus on developing efficient and accurate representations of atmospheric particles and clouds in computer models. Rasch has led the development of major U.S. efforts in Earth system modeling. He also studies the concept of geoengineering—interventions designed to modify the climate in order to counteract global warming.

Rasch has a track record of providing scientific input to national and international decision-makers, including contributions to the International Panel on Climate Change and participating in numerous national assessments on climate change. He’s testified before Congressional committees and served on numerous National Academy of Science panels. He ranks in the top one percent of most highly cited geoscientists, according to Clarivate Analytics.

Allison Campbell, a WSAS member since 2013, will serve as treasurer of the WSAS board beginning in September. Campbell leads PNNL’s coastal and marine sciences strategy. She most recently served as the associate laboratory director for PNNL’s Earth and Biological Sciences Division. A physical chemist whose research includes biomaterials development, Campbell is a former president of the American Chemical Society. She also is an avid promoter of science education, sharing enthusiasm for her field with students through a number of hands-on programs.

L. Ruby Leung will become a WSAS board member in September. Her transformational research on modeling regional climate change and its impacts continues to guide national policymakers responsible for water ecology, agriculture, public health, economy, energy and national security. A Battelle fellow at PNNL and WSAS member since 2013, Leung collaborates with major national and international research groups, serves on key national and international science committees, and has served on advisory and review panels for many environmental agencies.

Campbell and Leung join PNNL retirees Ron Thom (past president) and Don Baer (secretary) as board members. Baker and Rasch will be inducted into WSAS at its 13th annual meeting on September 10, where the symposium topic is decarbonizing Washington state.

WSAS is an independent, nonprofit 501(c)(3) organization established by the Washington State Legislature to respond to scientific and technical questions to inform public policy. WSAS is made up of more than 300 Washington state scientists and engineers.