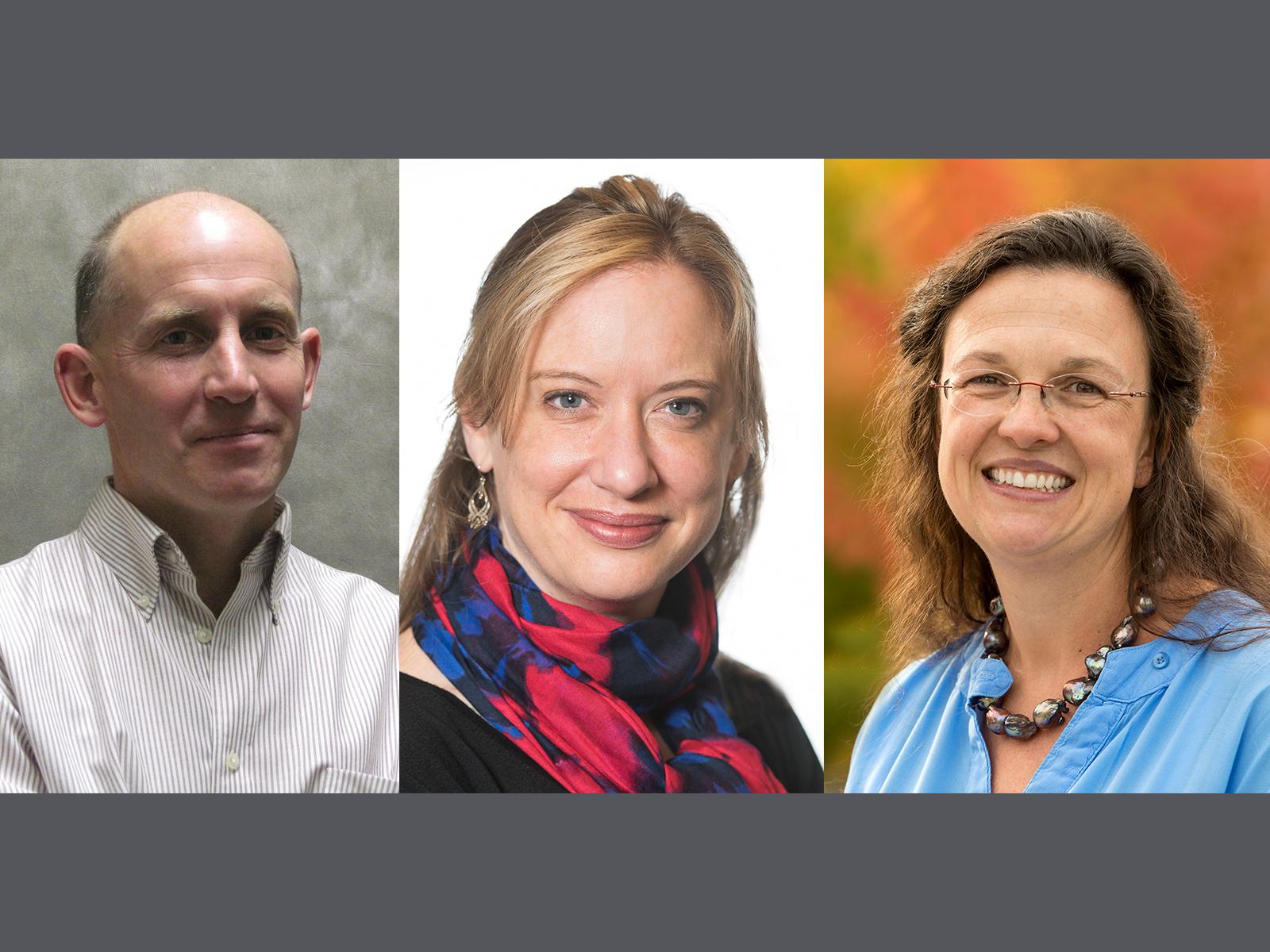 Ben Bond-Lamberty, an Earth scientist, and Melanie Roberts, the director of state and regional affairs at PNNL, have been named as fellows by the American Association for the Advancement of Science (AAAS), along with Washington State University’s Aurora Clark who holds a joint appointment at PNNL. The rank of fellow is the AAAS’s highest honor, awarded to members for their distinguished efforts to advance science or its applications for society.

The 2019 class of AAAS fellows will be recognized on Saturday, February 15, during the 2020 AAAS Meeting in Seattle, Washington. With the addition of Bond-Lamberty, Roberts, and Clark, PNNL has 31 active staff members who are AAAS fellows.

Bond-Lamberty joined PNNL in 2008 as a research associate at the Joint Global Change Research Institute, a partnership between PNNL and the University of Maryland. His research focuses on how carbon cycles through the environment and how environmental disturbances—such as forest fires, warming, and drought—affect Earth’s soil microbial communities.

His work has helped bridge the gap between measurements and models of soil respiration based on organic decomposition. With PNNL research colleagues, he broke new ground in conducting open experiments with data and analytical code available in real time on public repositories. The freely available data—particularly his global soil respiration database—and R programming code have been used in hundreds of subsequent analyses and published papers.

With more than 100 research papers published across 44 journals both in the United States and abroad, Bond-Lamberty’s work has appeared in Science, Nature, the Public Library of Science One, Proceedings of the National Academy of Sciences, and the Journal of Geophysical Research, to name just a few. He has served on editorial boards for many scientific journals and is currently an editor for Ecosystems, Global Biogeochemical Cycles, and Environmental Research Letters. Each year since 2016, he has been recognized as a top reviewer in the disciplines of agricultural and biological science, environment, and ecology. Other researchers have cited his work more than 6,000 times.

An early adopter of social media for science outreach, Bond-Lamberty posts frequent updates on his Twitter page, has participated in PNNL social media campaigns, and blogged for Public Library of Science Biology and Nature Ecology & Evolution. His research has been covered by numerous news outlets, including Discover Magazine, Huffington Post, and the Washington Post. He also devotes considerable time to mentoring early-career scientists and high school interns and serves on masters and doctoral committees at the University of Delaware and Virginia Commonwealth University.

He says that as he advances in his career, paying it forward is increasingly important, especially for groups that are generally underrepresented in science. “Some of these kids are the first generation in their family to go to college and don’t know how to get into science or who to talk to about it.”

A native of New York, Bond-Lamberty earned bachelor’s degrees in history and computer science from Williams College in Massachusetts and a doctorate in forest ecosystem ecology from the University of Wisconsin-Madison.

Roberts became interested in science policy as a graduate student in neuroscience at the University of Washington. She first became aware of opportunities to influence the broader societal applications of science through science policy while attending her first AAAS conference during her second year of graduate school.

Roberts did postdoctoral work in science and innovation policy and was awarded an AAAS Science and Technology Policy Fellowship to work in the U.S. Senate and the National Science Foundation. She founded a national leadership program for AAAS that recruited graduate students to address issues in their communities. She also served as assistant director of the BioFrontiers Institute at the University of Colorado, and as an independent consultant for graduate education and science policy clients.

Roberts joined PNNL’s External Affairs team in 2018 as director of state and regional affairs, where she connects PNNL with state government, associations, and other partners to leverage regional partnerships and funds to boost PNNL’s reputation and advance its mission.

She also helps scientists and engineers understand how to share their research with the public and policy makers in meaningful ways.

“It has to be a two-way conversation,” Roberts says. “As scientists, we need to learn from people about the challenges they are facing, not just tell or teach them about science.”

Roberts looks for opportunities to apply PNNL expertise to challenges in the region and helps PNNL staff prepare briefings to legislators. She is also excited to lead this year’s innovation track for the PNNL’s Scientist and Engineer Development Program (SEDP). Multidisciplinary teams of SEDP participants will develop innovative ideas to address plastics recycling in Washington State, in collaboration with advisors from state government, a for-profit recycling company, a nonprofit, and a university.

Roberts’ passion is inspiring scientists to contribute to effective policy-making through good communication, cross-sector collaboration, and participation in their communities. She measures her success by the success of those she has mentored or inspired to participate in civic life beyond the lab.

She has served on numerous advisory committees, including the National Academy of Sciences Committee on Graduate STEM Education for the 21st Century. Roberts is also a graduate of Leadership Tomorrow, a program that cultivates civic leaders in the Puget Sound region.

Clark joined the Washington State University chemistry department in 2005 and became a joint appointee to PNNL in 2018. As a PNNL Laboratory fellow, she works with PNNL’s Physical Sciences Division to understand interfacial reactivity in complex environments—such as Hanford waste tanks—that include extremes in alkalinity, concentrated electrolytes, and ionizing radiation. Clark was a founding co-director of the WSU-PNNL Nuclear Science and Technology Institute. She is also the deputy director of IDREAM, a DOE Energy Frontier Research Center led by PNNL.

Founded in 1848, AAAS is the world’s largest general scientific society and publisher of numerous journals, including its flagship, Science. The mission of AAAS is to advance science and serve society through initiatives in science policy, international programs, science education, public engagement, and more.