Group studies how to extract heat from Earth’s hottest rocks 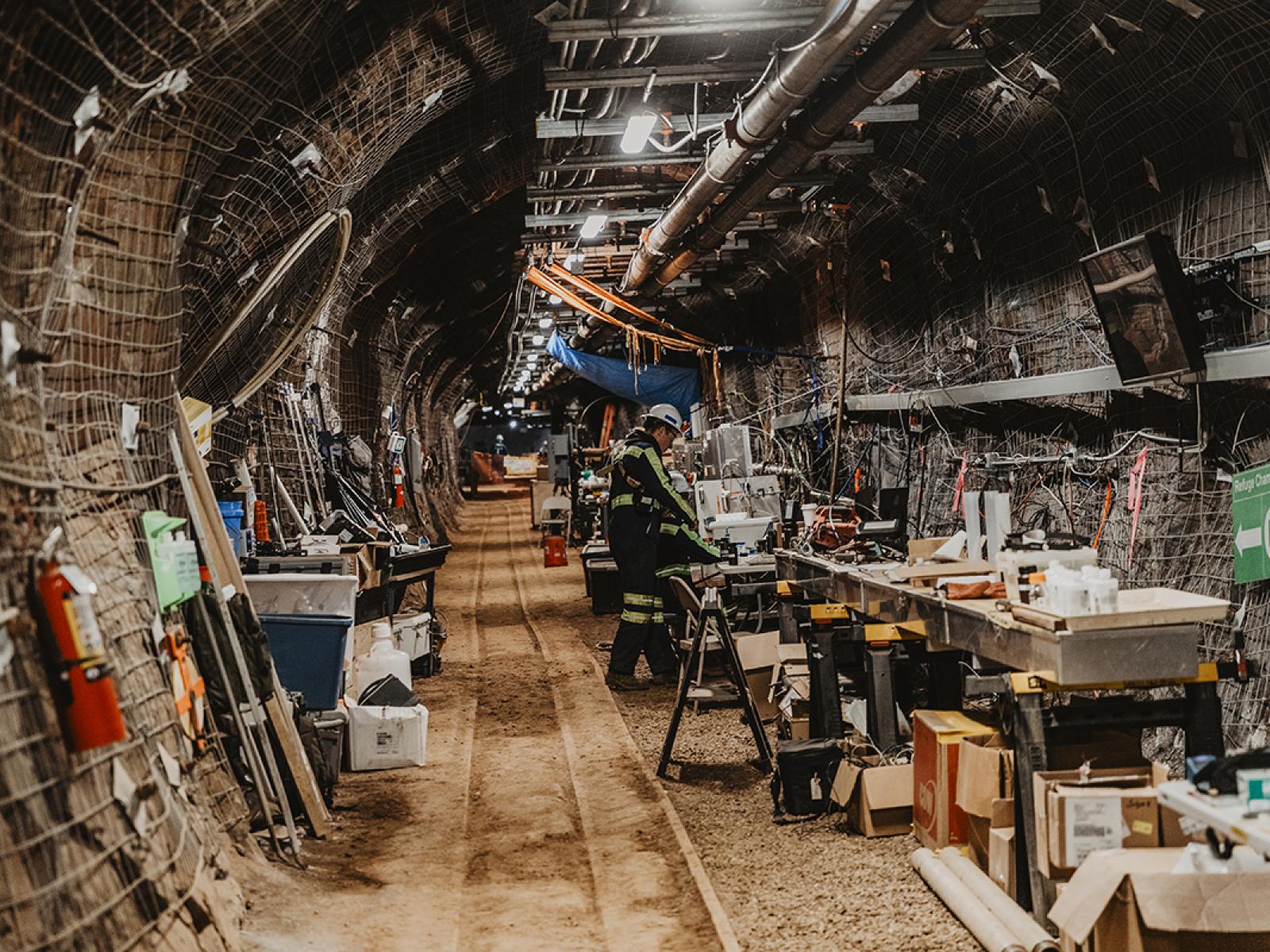 Researchers outfitted a drift on the 4100 Level of the Sanford Underground Research Facility for the next phase of the EGS Collab experiment.

In the Northern Black Hills of western South Dakota is the town of Lead—population 2,985.  The deepest gold mine in North America, the Homestake Mine, was settled in Lead during the Black Hills Gold Rush.

Today, the mine is closed, and its 370 miles of underground space have become the Sanford Underground Research Facility. Sanford Lab, or SURF, is 8,000 feet deep and is currently used for 27 research projects ranging from biology to geology.

It’s here that researchers from eight universities and 10 national laboratories, including Pacific Northwest National Laboratory (PNNL), are using a full-scale underground laboratory at SURF to explore the potential for geothermal energy. The team of researchers, known as the Enhanced Geothermal Systems Collab Project (EGS Collab), is validating models of enhanced geothermal reservoir behavior, exploring how geothermal energy could one day provide power to 10 million homes. Through live streams of validation test runs, EGS Collab is providing an international stage for geothermal research.

Over the last four years, EGS Collab, an effort funded by the U.S. Department of Energy's Geothermal Technologies Office, has studied hydraulic fracturing from 4,850 feet below the surface. The goal of the EGS Collab is to create predictive models of fracture creation to improve the effectiveness of geothermal energy systems. That work built on previous research from an experiment site known as Stimulation Investigations for Geothermal Modeling Analysis (SIGMA-V). Hydraulic fracturing involves creating a fracture through high-pressure fluid injection into deep rock formations. This process is broadly referred to as rock stimulation or fracking. Unlike commercial-scale oil and gas applications, the stimulations at EGS Collab use water without chemical or sand additives.

With hydraulic fracturing, cold, pressurized water first causes fractures in the rock and as the liquid travels through those openings, transferring heat. The heat creates steam as it is pumped to the surface, moving turbines and generating electricity. For their study, the EGS team used specialized monitoring equipment coupled with industry tools to give scientists insight into what happens when rock is stimulated. The researchers injected pressurized water to stimulate rock and open fractures between two 60-meter boreholes. Six other boreholes were used to monitor the activity in real-time using geophysical instrumentation.

The data showed how relationships, both in time and space, are important in how these formations and fractures change over time, said Hunter Knox, PNNL’s EGS Collab principal investigator and a seismologist.

“Earth scientists never really get to put their hands around what they’re working on,” said Knox. “But when we put our data sources together, when we combined our lines of evidence, we saw how this testbed evolved."

In the next phase of EGS Collab research, the team is determining if hydraulic shearing is an efficient method for rock stimulation. Hydraulic shearing occurs in existing fractures and is hypothesized to facilitate greater heat transfer from the Earth’s deepest, hottest rocks.

With COVID-19 restrictions limiting travel for Knox and other members of EGS Collab, local and regional contractors have been helping with in-person work at SURF. Last month, DA Smith Drilling Company started drilling nine boreholes in the test bed at SURF—five boreholes for injecting or receiving water and four other boreholes for monitoring how the rock responded. RESPEC, an engineering firm in Rapid City, is providing measurements of the new boreholes to help with the core evaluation of the rock.

When EGS Collab starts testing hydraulic shearing techniques on the 4,100-foot level of SURF, the team will once again broadcast their tests for a global audience. Experts from around the world have been offering knowledge to the project since 2017. A past livestream lasted 30 days.

“We’ve never held a closed meeting,” said Tim Kneafsey, a staff Earth scientist at Lawrence Berkeley National Laboratory and principal investigator for EGS Collab. “We don't want this to be a closed project. Oftentimes, experimentalists go into the field, do our experiment, and come back with a ream of data. You hand it to an analyst and say, ‘Figure this out.’ But, in the case of EGS Collab, experimentalists and numerical modelers are working hand-in-hand during the experiment to try to figure things out, and it really improves the product.”

Data from EGS research will be used at the Frontier Observatory for Research in Geothermal Energy (FORGE) to help develop technologies that allow power to be extracted from anywhere in the United States that has sufficient heat. FORGE is a kilometer-scale field laboratory in Milford, Utah, with a full-scale analog to the 10-meter scale of the EGS Collab testbeds at SURF. The data from the EGS Collab project will help researchers at FORGE identify technologies to scale up, ultimately making these heat exchange systems economically sustainable.