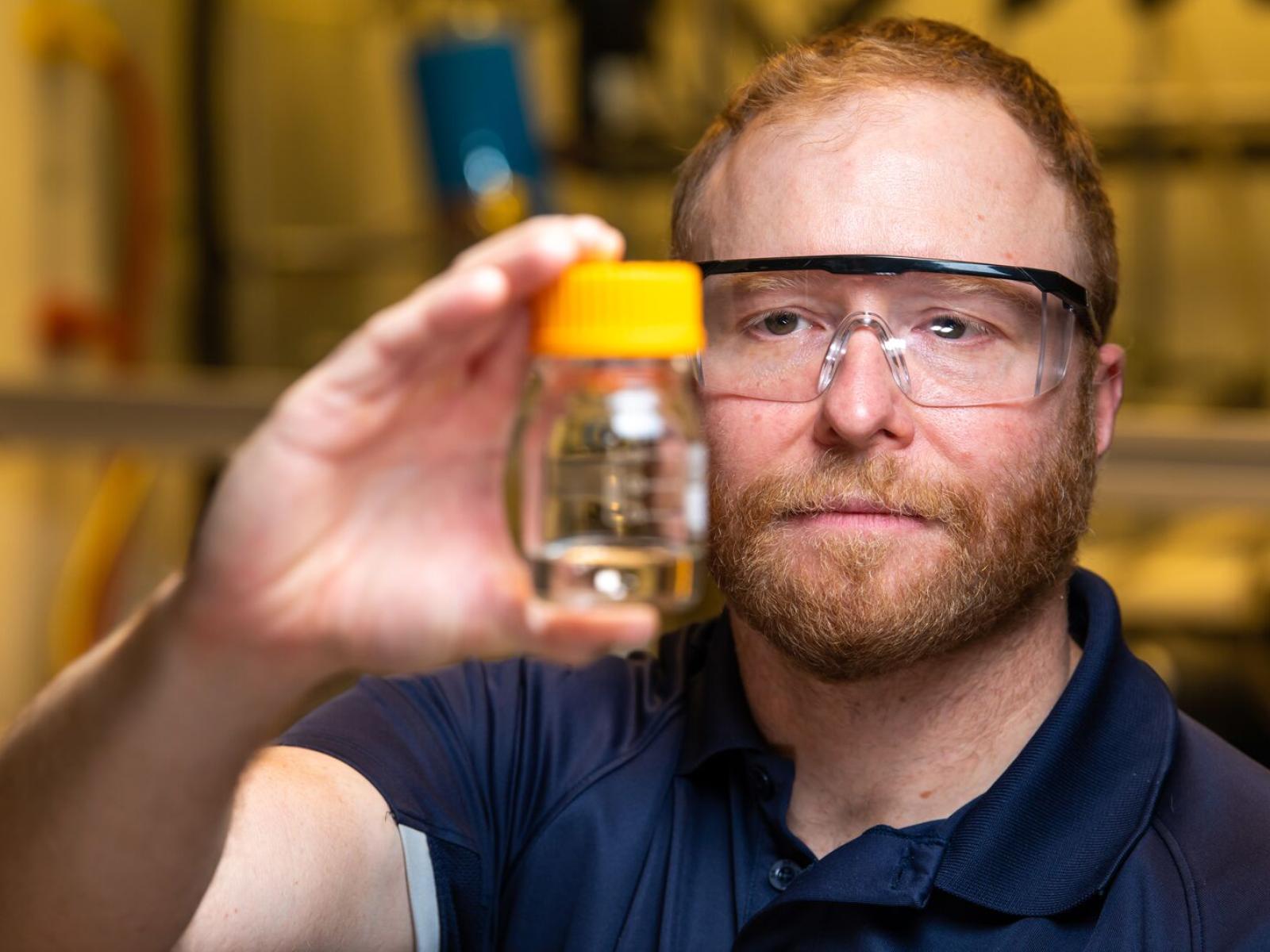 RICHLAND, Wash.—The need for technology that can capture, remove and repurpose carbon dioxide grows stronger with every CO2 molecule that reaches Earth’s atmosphere. To meet that need, scientists at the Department of Energy’s Pacific Northwest National Laboratory have cleared a new milestone in their efforts to make carbon capture more affordable and widespread. They have created a new system that efficiently captures CO2—the least costly to date—and converts it into one of the world’s most widely used chemicals: methanol.

Snaring CO2 before it floats into the atmosphere is a key component in slowing global warming. Creating incentives for the largest emitters to adopt carbon capture technology, however, is an important precursor. The high cost of commercial capture technology is a longstanding barrier to its widespread use.

PNNL scientists believe methanol can provide that incentive. It holds many uses as a fuel, solvent, and an important ingredient in plastics, paint, construction materials and car parts. Converting CO2 into useful substances like methanol offers a path for industrial entities to capture and repurpose their carbon.

PNNL chemist David Heldebrant, who leads the research team behind the new technology, compares the system to recycling. Just as one can choose between single-use and recyclable materials, so too can one recycle carbon.

“That's essentially what we're trying to do here,” said Heldebrant. “Instead of extracting oil from the ground to make these chemicals, we're trying to do it from CO2 captured from the atmosphere or from coal plants, so it can be reconstituted into useful things. You're keeping carbon alive, so to speak, so it's not just ‘pull it out of the ground, use it once, and throw it away.’ We're trying to recycle the CO2, much like we try to recycle other things like glass, aluminum and plastics.”

As described in the journal Advanced Energy Materials, the new system is designed to fit into coal-, gas-, or biomass-fired power plants, as well as cement kilns and steel plants. Using a PNNL-developed capture solvent, the system snatches CO2 molecules before they’re emitted, then converts them into useful, sellable substances.

A long line of dominoes must fall before carbon can be completely removed or entirely prevented from entering Earth’s atmosphere. This effort—getting capture and conversion technology out into the world—represents some of the first few crucial tiles.

Deploying this technology will reduce emissions, said Heldebrant. But it could also help stir the development of other carbon capture technology and establish a market for CO2-containing materials. With such a market in place, carbon seized by anticipated direct air capture technologies could be better reconstituted into longer-lived materials.

The call for cheaper carbon capture

In April 2022, the Intergovernmental Panel on Climate Change issued its Working Group III report focused on mitigating climate change. Among the emissions-limiting measures outlined, carbon capture and storage was named as a necessary element in achieving net zero emissions, especially in sectors that are difficult to decarbonize, like steel and chemical production.

“Reducing emissions in industry will involve using materials more efficiently, reusing and recycling products and minimizing waste,” the IPCC stated in a news release issued alongside one of the report’s 2022 installments. “In order to reach net zero CO2 emissions for the carbon needed in society (e.g., plastics, wood, aviation fuels, solvents, etc.),” the report reads, “it is important to close the use loops for carbon and carbon dioxide through increased circularity with mechanical and chemical recycling.”

PNNL’s research is focused on doing just that—in alignment with DOE’s Carbon Negative Shot. By using renewably sourced hydrogen in the conversion, the team can produce methanol with a lower carbon footprint than conventional methods that use natural gas as a feedstock. Methanol produced via CO2 conversion could qualify for policy and market incentives intended to drive adoption of carbon reduction technologies.

Methanol is among the most highly produced chemicals in existence by volume. Known as a “platform material,” its uses are wide ranging. In addition to methanol, the team can convert CO2 into formate (another commodity chemical), methane and other substances.

A significant amount of work remains to optimize and scale this process, and it may be several years before it is ready for commercial deployment. But, said Casie Davidson, manager for PNNL’s Carbon Management and Fossil Energy market sector, displacing conventional chemical commodities is only the beginning. “The team’s integrated approach opens up a world of new CO2 conversion chemistry. There’s a sense that we’re standing on the threshold of an entirely new field of scalable, cost-effective carbon tech. It’s a very exciting time.”

Commercial systems soak up carbon from flue gas at roughly $46 per metric ton of CO2, according to a DOE analysis. The PNNL team’s goal is to continually chip away at costs by making the capture process more efficient and economically competitive.

“We looked at three CO2-binding solvents in this new study,” said chemical engineer Yuan Jiang, who led the assessment. “We found that they capture over 90 percent of the carbon that passes through them, and they do so for roughly 75 percent of the cost of traditional capture technology.”

Different systems can be used depending on the nature of the plant or kiln. But, no matter the setup, solvents are central. In these systems, solvents wash over CO2-rich flue gas before it’s emitted, leaving behind CO2 molecules now bound within that liquid.

Creating methanol from CO2 is not new. But the ability to both capture carbon and then convert it into methanol in one continuously flowing system is. Capture and conversion has traditionally occurred as two distinct steps, separated by each process’s unique, often non-complementary chemistry.

“We’re finally making sure that one technology can do both steps and do them well,” said Heldebrant, adding that traditional conversion technology typically requires highly purified CO2. The new system is the first to create methanol from “dirty” CO2.

The process of capturing CO2 and converting it to methanol is not CO2-negative. The carbon in methanol is released when burned or sequestered when methanol is converted to substances with longer lifespans. But this technology does “set the stage,” Heldebrant said, for the important work of keeping carbon bound inside material and out of the atmosphere.

Other target materials include polyurethanes, which are found in adhesives, coatings, and foam insulation, and polyesters, which are widely used in fabrics for textiles. Once researchers finalize the chemistry behind converting CO2 into materials that keep it out of the atmosphere for climate-relevant timescales, a wide web of capture systems could be poised to run such reactions.

In lieu of today’s smokestacks, Heldebrant envisions CO2 refineries built into or alongside power plants, where CO2-containing products can be made on site. “We are at a turning point,” Heldebrant and his coauthors wrote in a recent article published in the journal Chemical Science, “where we can continue to use 20th century, monolithic capture and conversion infrastructure or we can begin the transition to a new 21st century paradigm of integrated solvent-based carbon capture and conversion technologies.”

This work was supported by the Department of Energy’s Technology Commercialization Fund, the Office of Fossil Energy and Carbon Management, and Southern California Gas. Part of the work was performed at EMSL, the Environmental Molecular Sciences Laboratory, a DOE Office of Science user facility at PNNL. Preliminary work that led to this latest research, along with the perspective article in Chemical Science, was supported by the Office of Basic Energy Sciences, Chemical Sciences, Geosciences, and Biosciences Division.