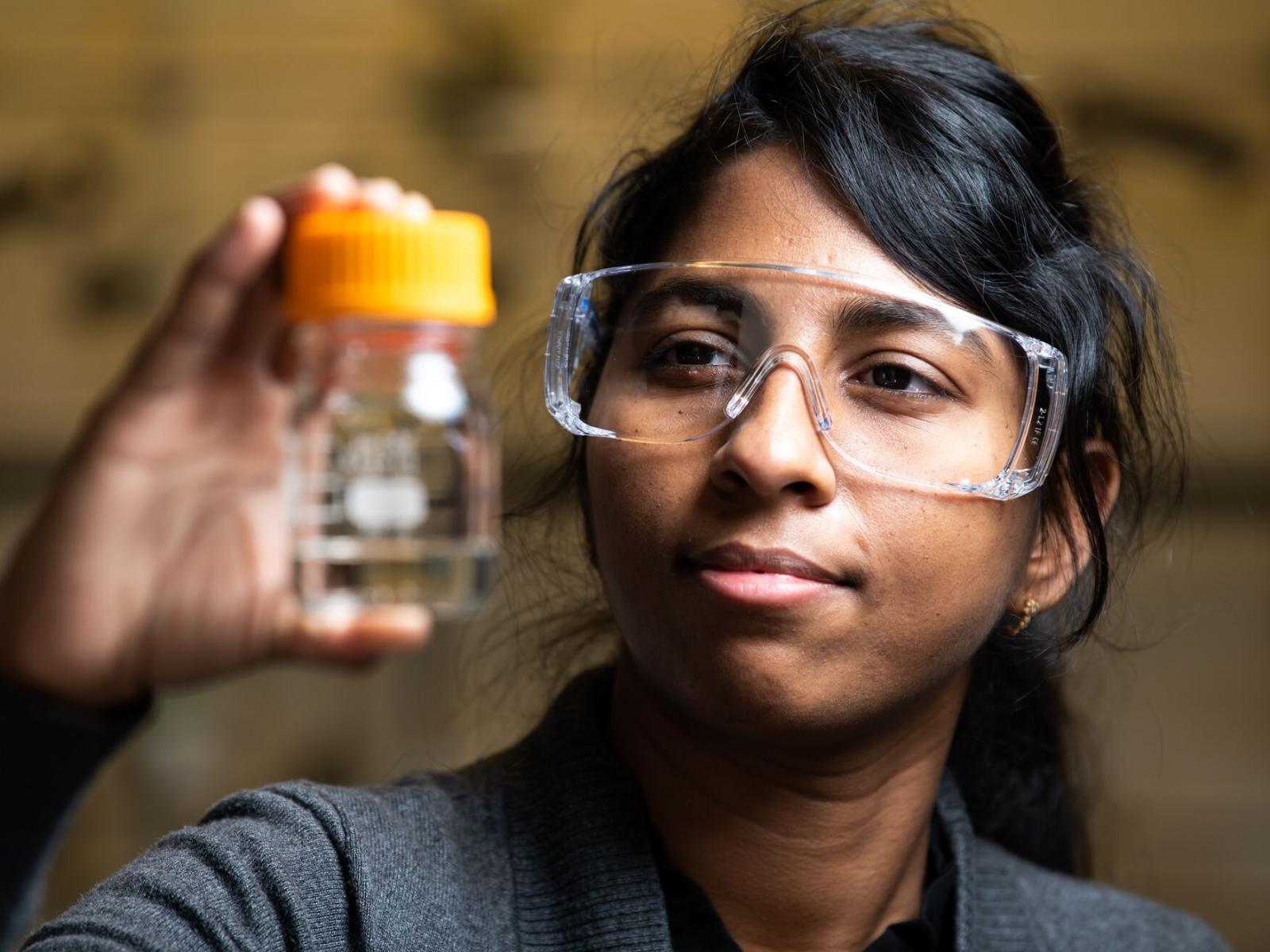 Just as important as understanding how best to capture CO2 is understanding how to use it. A new study details how CO2 can be converted into methane, the primary component of synthetic natural gas. Here, Jotheeswari Kothandaraman, PNNL chemist and author of the new study, holds a sample of methanol, which has an even greater number of applications than methane.

By streamlining a longstanding process in which CO2 is converted to methane, the researchers’ new method reduces the materials needed to run the reaction, the energy needed to fuel it and, ultimately, the selling price of the gas.

A key chemical player known as EEMPA makes the process possible. EEMPA is a PNNL-developed solvent that snatches CO2 from power plant flue gas, binding the greenhouse gas so it can be converted into useful chemicals.

When compared to the conventional method of methane conversion, the new process requires an initial investment that costs 32 percent less. Operation and maintenance costs are 35 percent cheaper, bringing the selling price of synthetic natural gas down by 12 percent.

Different methods for converting CO2 into methane have long been known. However, most processes rely on high temperatures and are often too expensive for widespread commercial use.

In addition to geologic production, methane can be produced from renewable or recycled CO2 sources, and can be used as fuel itself or as an H2 energy carrier. Though it is a greenhouse gas and requires careful supply chain management, methane has many applications, ranging from household use to industrial processes, said lead author and PNNL chemist Jotheeswari Kothandaraman.

“Right now a large fraction of the natural gas used in the U.S. has to be pumped out of the ground,” said Kothandaraman, “and demand is expected to increase over time, even under climate change mitigation pathways. The methane produced by this process—made using waste CO2 and renewably sourced hydrogen—could offer an alternative for utilities and consumers looking for natural gas with a renewable component and a lower carbon footprint.”

To explore the use of EEMPA in converting CO2 to methane, Kothandaraman and her fellow authors studied the reaction’s molecular underpinnings, then assessed the cost of running the process at scale in a 550-megawatt power plant.

Using EEMPA instead reduces the energy needed to fuel such a reaction. The savings stem partly from EEMPA’s ability to make CO2 dissolve more easily, which means less pressure is needed to run the conversion.

The authors’ assessment identified further cost savings, in that CO2 captured by EEMPA can be converted to methane on site. Traditionally, CO2 is stripped from water-rich solvents and sent off site to be converted or stored underground. Under the new method, captured CO2 can be mixed with renewable hydrogen and a catalyst in a simple chamber, then heated to half the pressure used in conventional methods to make methane.

The reaction is efficient, the authors said, converting over 90 percent of captured CO2 to methane, though the ultimate greenhouse gas footprint depends on what the methane is used to do. And EEMPA captures over 95 percent of CO2 emitted in flue gas. The new process gives off excess heat, too, providing steam for power generation.

The chemical process highlighted in the paper represents one path among many, said Kothandaraman, where captured CO2 can be used as a feedstock to produce other valuable chemicals.

“I’ll be glad when I can make this process work for methanol as efficiently as it does for methane now,” she said. “That’s my long-term goal.” Methanol has many more applications than methane, said Kothandaraman, who has sought to uncover the catalytic reactions that could produce methanol from CO2 for roughly a decade. Creating plastics from captured CO2 is another route the team plans to explore.

“It’s important that we not only capture CO2, but find valuable ways to use it,” said Ron Kent, Advanced Technologies Development Manager at SoCalGas, “and this study offers a cost-effective pathway toward making something valuable out of waste CO2.”

This study, “Integrated Capture and Conversion of CO2 Using a Water-lean, Post-Combustion CO2 Capture Solvent,” was supported by SoCalGas and the Department of Energy’s Technology Commercialization Fund and Office of Science.