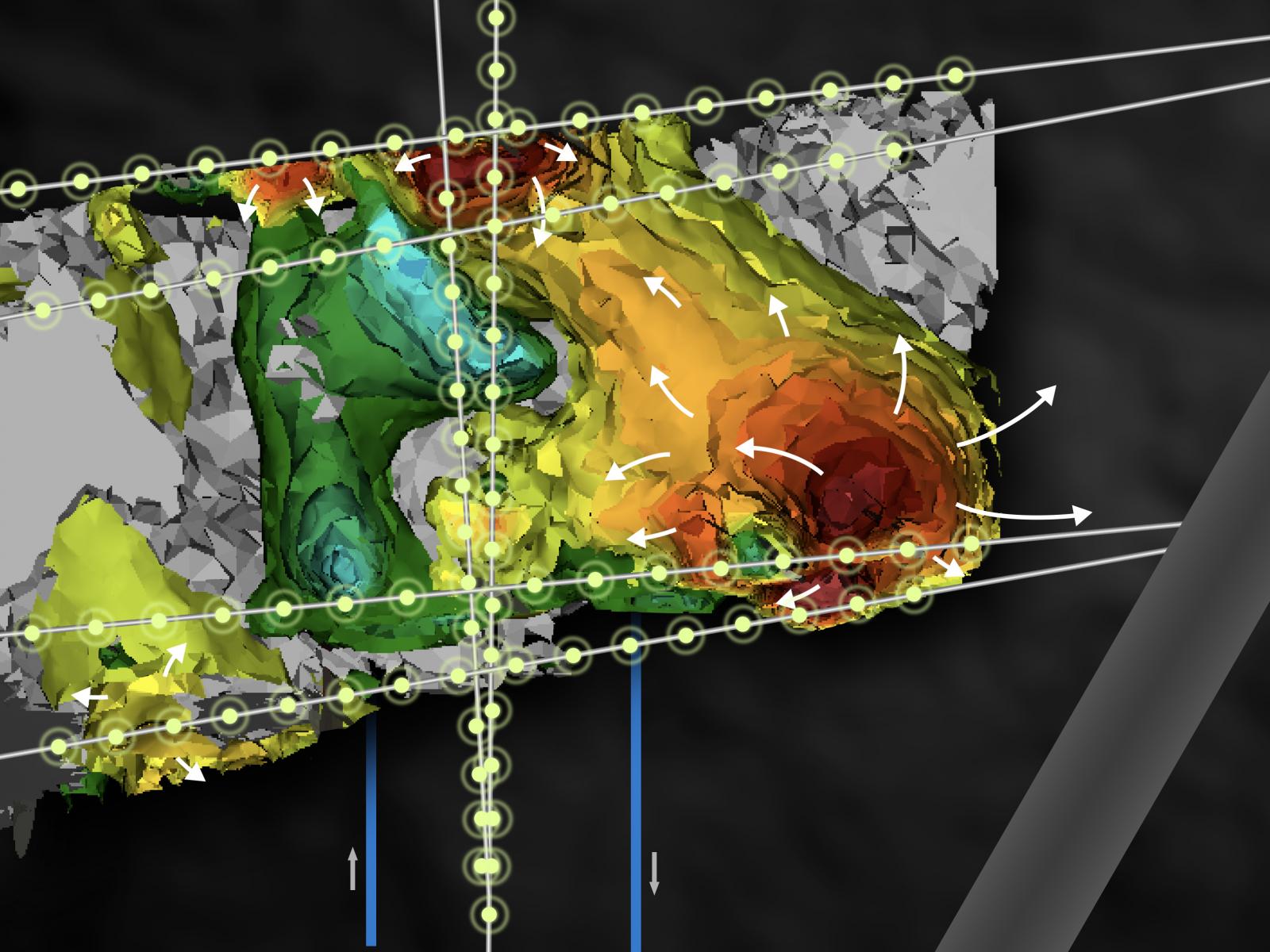 Electrical resistivity tomography (ERT) gauges underground changes by measuring electrical conductivity in the rock. ERT then produces 4D—that is, 3D plus time-lapse—images of the subsurface.

Scorchingly hot granite deep underground can be tapped for energy by opening up cracks in the rock. This potential resource, known as enhanced geothermal energy, requires a clear sense of changes happening in the rock over time—a complex picture that can be difficult to capture.

What is an enhanced geothermal system?

Conventional geothermal systems rely on water and flow pathways that are already present within hot rock. An enhanced geothermal system harvests heat trapped within dry rock by introducing water and cracks. Operators drill two underground wells thousands of feet below the surface and then inject fluid at high pressure to fracture the rock between the wells. The fracturing process for heat is similar to what’s known as “fracking” shale rock to release oil and gas.

Temperatures at this level can reach beyond 200 ºC (392 ºF). Water pumped from one well to the other and back up to the surface collects heat from the rock, generating steam that can drive a turbine for electricity.

Enhanced geothermal systems could provide an estimated 100 gigawatts of electricity—enough to power 100 million homes. But such systems involve expensive drilling, and they need better monitoring and prediction of underground changes to reduce the uncertainty and risk associated with a given project.

Like any underground environment, enhanced geothermal systems change over time. Fractures in the rock open and close in response to stresses caused by high-pressure fluid injections, changing the system's heat output. Seismic activity is one indicator of subsurface stress, but information from microseismic monitoring is limited.

"In these deep, hot rocks, it's too expensive to drill enough monitoring wells to understand what's going on using direct sampling," said Tim Johnson, a computational scientist at PNNL who co-authored the study. "The primary focus of this project is to better understand, and ultimately to predict, how fractures are going to behave in a high-stress environment when you try to connect them between two wells."

Getting a clearer underground picture

"It's similar to medical imaging, except that you're doing a time lapse," Johnson said. "So you're watching how things change, and usually the change relates to how the fluid is flowing in the subsurface."

Johnson and other researchers at PNNL have pioneered the use of ERT as a 3D monitoring tool, and E4D at shallower depths of up to 350 feet, where it has been used to detect and trace contaminants, for example. To test it in the deep subsurface, the team deployed it at the Sanford Underground Research Facility in Lead, South Dakota. The work, which is supported by the Department of Energy (DOE)'s Office of Energy Efficiency and Renewable Energy through its Geothermal Technologies Office, is part of a larger collaborative effort across DOE to enhance access to natural resources and storage in the subsurface. Lawrence Berkeley National Laboratory leads the effort, known as the Enhanced Geothermal Systems (EGS) Collab. Partner labs include PNNL, Sandia National Laboratories, Lawrence Livermore National Laboratory, Idaho National Laboratory, and Los Alamos National Laboratory.

The intent of the ERT monitoring at Sanford was to monitor fluid flow, as had been done at shallower levels. But the results initially didn't seem to align with those earlier uses.

"What we were seeing with the changes in conductivity didn't make sense in terms of fluid flow," Johnson said. But if the conductivity wasn't reflecting the movement of fluids, what was it showing?

After years of hunting for an answer, Johnson found it in scientific papers from the 1960s and 1970s. Researchers at the Massachusetts Institute of Technology and also at Lawrence Berkeley National Laboratory had observed changes in the conductivity of crystalline rocks in response to stress—squeezing the rock in lab experiments made it less conductive. This meant the ERT wasn't simply following fluid underground. It was charting the opening and closing of fractures in response to stress.

"Once we made that link, everything made sense in terms of what the time-lapse images were doing," Johnson said.

ERT offers several advantages. With no moving parts and electrodes installed outside the well casing, the equipment is low maintenance and can operate while injections are happening. And the imaging happens in real time, giving facility operators feedback they can use almost immediately, if needed. However, ERT cannot be used with metal wellbore casings, which are ubiquitous in deep subsurface projects.

There are ways around this hurdle, such as using fiberglass casing, coating the casing with a non-metallic epoxy, or using a different, nonmetallic material altogether. But for now, Johnson and team are continuing to improve and test the use of ERT at the Sanford facility.