PNNL delivers a decade of science and solidarity to Fukushima 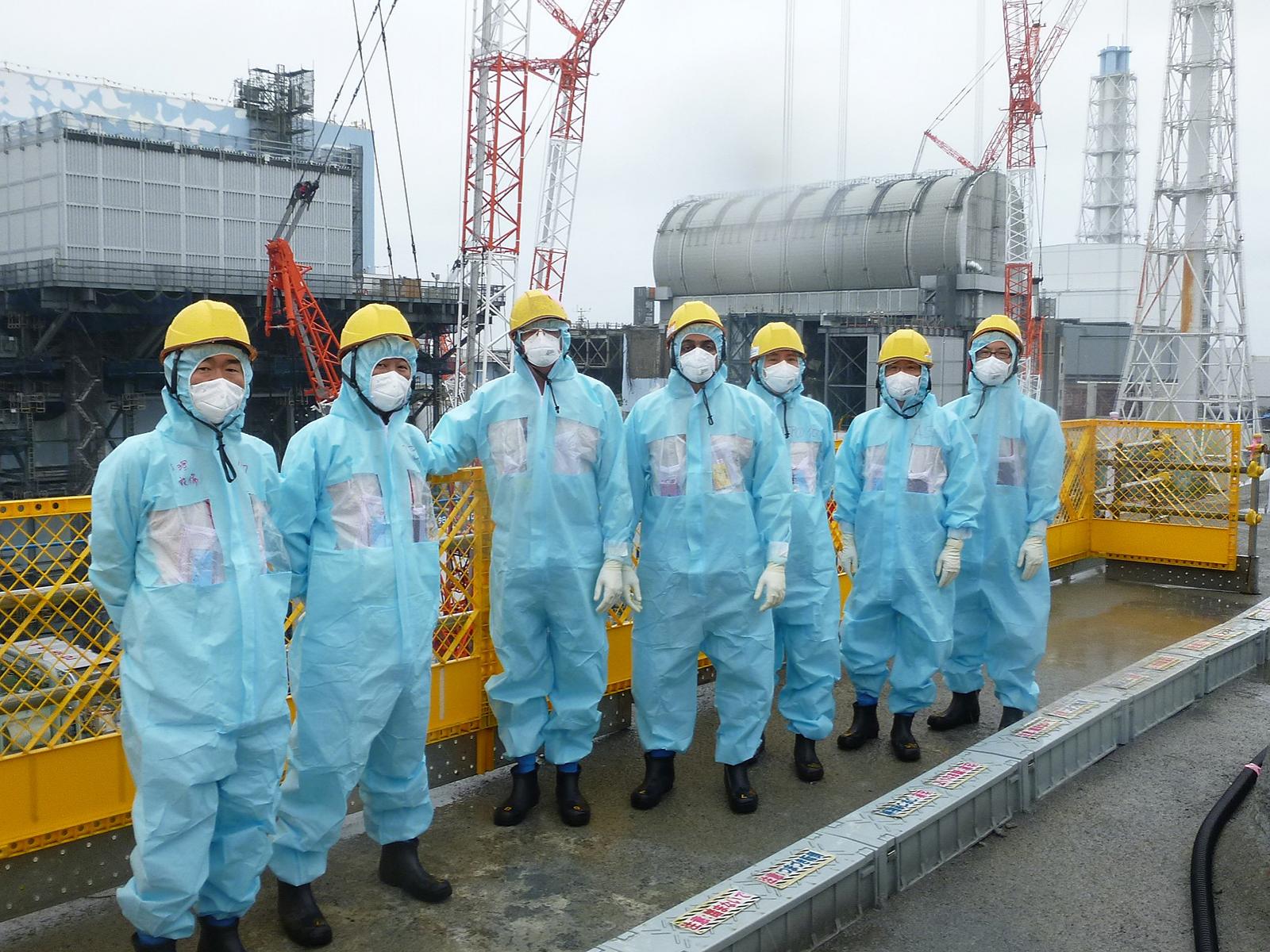 PNNL’s Mark Triplett with Karthik Subramanian of Washington River Protection Solutions (third and fourth from left) and Japanese colleagues in front of Fukushima Daiichi Units 2 and 3 in April 2018.

An earthquake off the coast of Japan. A resulting tsunami. Ten years ago, Mark Triplett watched the news unfold and worried about two things. The safety of his son and daughter-in-law who were living in Japan at the time. He quickly learned his family was unaffected and safe. But the other concern? It’s still with him, almost daily.

He didn’t know he’d soon be tapped by the U.S. State Department to advise the Japanese government on cleanup matters, or how the natural disaster an ocean away would come to link Fukushima with PNNL and the surrounding Tri-Cities, Washington, community.

Five days after the disaster took place on March 11, 2011, a PNNL team was the first in North America to detect the radioactive isotope xenon-133 from the ruined power plants. The isotope had drifted almost 5,000 miles to Washington State and would go on to repeatedly circle the Northern Hemisphere.

Although the concentration of radioactivity was extremely low and posed no health hazard in North America, the fact that a tiny quantity of the isotope could be detected halfway around the globe was a testament to decades of PNNL’s research on detecting trace amounts of radiation in the environment. Even when radioxenon comprises just one-trillionth of one-trillionth of a cubic meter of air, scientists can now detect it thanks to PNNL.

PNNL’s unusual detection prowess harkens back to early studies at Hanford, a former plutonium production site near the laboratory. This work gave rise to PNNL’s expertise in radiochemistry, nuclear physics, and the ability to sense, measure, and identify radioactivity at increasingly lower levels. The ongoing development of this expertise and technology supports nuclear nonproliferation and verification of the Comprehensive Nuclear-Test-Ban Treaty.

PNNL’s scientific studies during Hanford operations also built expertise in predicting how contaminants would move in the environment and in estimating radiation releases and exposures. During the first weeks and months after the Fukushima Daiichi reactor meltdown, PNNL participated with the U.S. Department of Energy (DOE) to supply this expertise.

As the situation in Fukushima began to stabilize, PNNL’s more recent environmental research supporting Hanford cleanup activities became part of the discussions with Japanese officials. After 40 years of nuclear weapons productions, DOE’s Hanford site has more than a few similarities with Fukushima when it comes to cleaning up radioactive waste. PNNL contributes to the science of Hanford cleanup, including advancing technology to melt radioactive waste into glass. This process, called vitrification, incorporates the radionuclides in glass to protect the environment.

Vitrification is one of several waste immobilization technologies being considered to deal with secondary waste at the Fukushima Daiichi plant. PNNL is formulating and testing specific glass ‘recipes’ for durability and potential use in various vitrification technologies—including two that were developed at PNNL. The first technology, licensed as GeoMelt, melts waste with glass forming materials directly in containers, where it solidifies into an obsidian like glass. The second is a liquid-fed ceramic melter vitrification process, which forms the basis for the design of the Hanford Tank Waste Treatment and Immobilization Plant.

In the first few weeks after the event, PNNL radiochemical separations experts provided Japanese authorities details about methods to remove the radionuclides from water used to cool the damaged reactor cores. PNNL has been testing one of those methods—ion exchange—for radiologically contaminated liquids since the 1990s. Ion exchange columns use specialized media to capture radionuclides like cesium and strontium from the contaminated water. After commercial water treatment facilities were up and running, handling as much as 100,000 gallons a day, PNNL staff made multiple trips to the Fukushima site to review the system performance.

At Hanford, this same technology is part of the Tank-Side Cesium Removal System, slated to begin pre-treating Hanford tank waste before it is vitrified. But since Japan’s situation was more critical than at Hanford, they’ve forged ahead and have used ion exchange to treat cooling water since just months after the accident in 2011. In a reversal of sorts, the experience of the Japanese application of ion exchange will be very beneficial for Hanford’s cesium removal and storage plans.

PNNL has delivered additional scientific support including contaminant transport models and molecular modeling to understand how cesium adheres to clay minerals in the Fukushima soil. Research performed previously at PNNL helped to inform decisions that ultimately led to a shelter covering reactor unit one and how to avoid dangerous hydrogen gas buildup in waste storage containers.

Over the past decade, the scientific and technical relationship between PNNL and Fukushima has deepened with more than 30 staff members working on the aftermath of the reactor meltdown. Triplett has made more than 12 trips to Japan and has hosted more than 300 Japanese visitors in the Tri-Cities. Not surprisingly, a kinship quickly developed between the two areas—each one dealing with a nuclear legacy, perceptions, and sometimes misconceptions, from the rest of the world.

Representatives from Fukushima are interested in how the Tri-Cities community has learned to advocate for cleanup funding, involve the public in the plans, and leverage a challenging situation into economic development around that growth.

Triplett continues to connect Fukushima and Japanese stakeholders with colleagues at DOE, Hanford, the Tri-City Development Council (TRIDEC), and the surrounding cities and counties. He recently organized an online seminar for a group of Tri-Cities community and academic leaders with more than 150 of their counterparts in Fukushima.

Fukushima leaders are also learning how PNNL has diversified from its Hanford origins in 1965 to a broad science and technology mission that today is only about five percent Hanford-related. TRIDEC has emphasized to those advocating for Fukushima the need for speaking with ‘one voice,’ having cleanup contractors living and investing in the area, and encouraging local colleges and universities to develop a skilled work force for the region that will support the multi-decade cleanup mission.

Lessons learned—reducing risk in the U.S.

In the aftermath of the Fukushima disaster, the U.S. Nuclear Regulatory Commission (NRC) required commercial nuclear power plants to reevaluate their seismic and flooding hazards and mitigations.

In both the U.S. and in Japan, ramifications of the Fukushima disaster live on. In Japan, the ripple effects continue, figuratively and literally—an earthquake on February 13, 2021, registered 7.3 on the Richter scale and was labeled an aftershock of the 2011 quake. But as Japanese officials grapple with ongoing cleanup and economic development, they’ll do so with the continued support of PNNL scientists and engineers.