Even in the midst of a pandemic, PNNL focus on radioxenon enhances nuclear nonproliferation 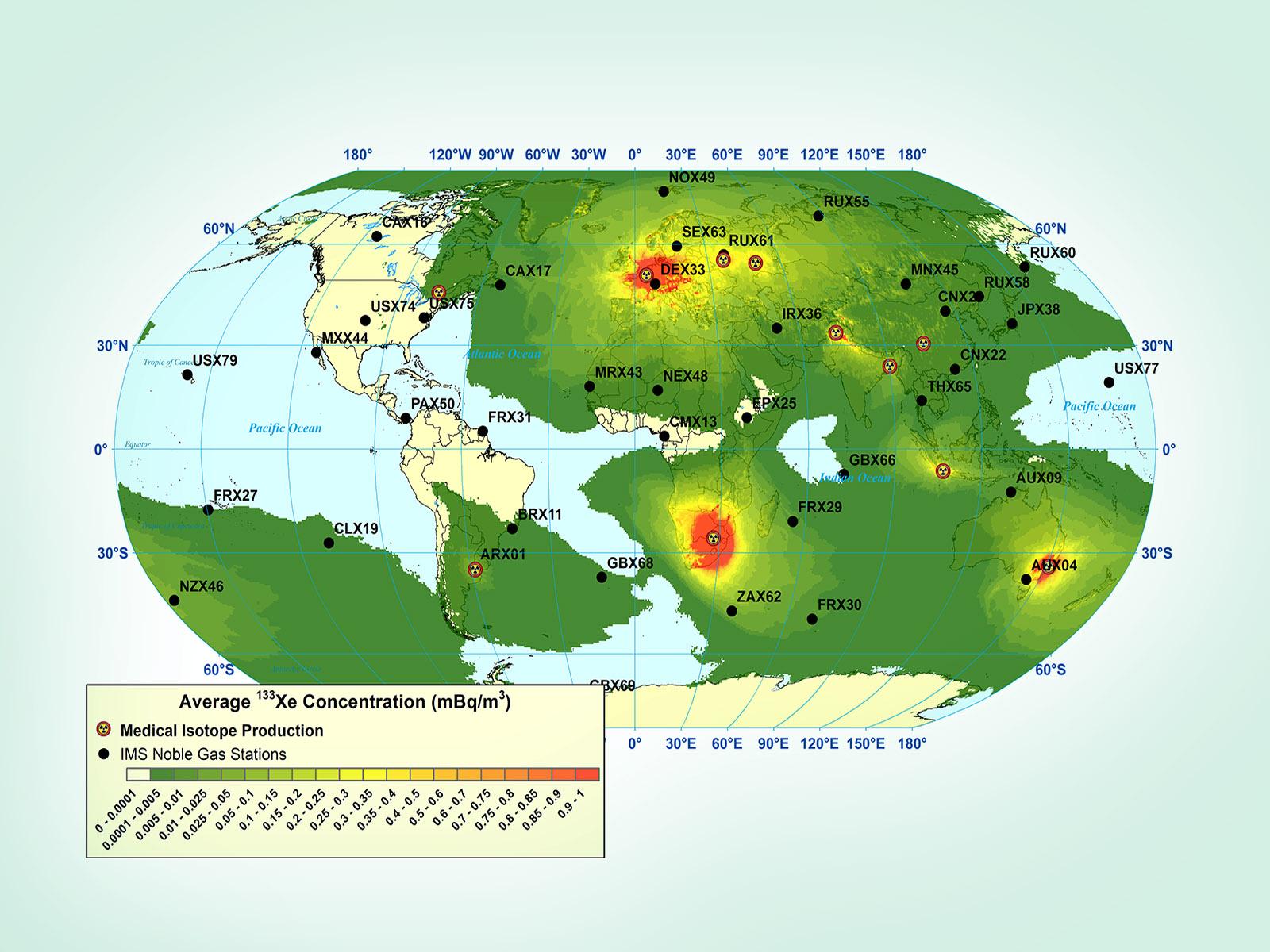 The average global concentration of xenon 133 from anthropogenic sources.

Imagine being able to detect the faintest of radionuclide signals from hundreds of miles away.

That’s the capability created by scientists at Pacific Northwest National Laboratory who have contributed much of the nuclear science that underlies an international monitoring system designed to detect nuclear explosions worldwide. The system constantly collects and analyzes air samples for signals that would indicate a nuclear explosion, perhaps conducted secretly underground.

Incredibly, the system can detect just a small number of atoms from nuclear activity anywhere on the planet. In terms of sensitivity, the capability – in place for decades – is analogous to the ability to detect coronavirus from a single cough anywhere on Earth.

This summer, experts from around the world came together online to discuss the science in a remote version of a biennial meeting, the Workshop on the Signatures of Man-Made Isotope Production, or WOSMIP Remote. The event was organized by an international team led by PNNL nuclear physicist Ted Bowyer, whose groundbreaking work more than 20 years ago helped open the door to worldwide monitoring of trace signals that betray nuclear explosions.

The WOSMIP video sessions were designed for scientists exploring a key question: How can they separate out signals of interest, such as from a nuclear explosion, from benign background signals that emanate from peaceful uses, such as working nuclear reactors or medical isotope production facilities?

Few capabilities are more important to get right for world security. A false positive could lead the international community to conclude that a country conducted a nuclear test when it did not. A false negative could mean that an illicit nuclear explosion went undetected.

“It’s like a park ranger trying to differentiate many legal campfires vs. one small campfire that is not permitted,” said Bowyer, an expert in precise measurement of isotopes of noble gases like xenon. “There’s smoke all over the place and the park ranger has to determine if any of the fires are illegal, and if so, which ones.  Our goal is to stop the illegal fires by determining the cause of the smoke.”

STAX: Revealing radioxenon at the stack

During WOSMIP Remote, several presentations focused on background signals emitted into the atmosphere from the production of medical isotopes, such as technetium-99m. Widely used to diagnose cancer, heart disease, and other health conditions, medical isotopes are produced in a handful of facilities – fewer than a dozen – that dot the globe. But their nuclear signatures, while well below regulatory levels, mimic those from a nuclear test, and their signals can be just as strong. This mimicry presents a barrier to pinpointing true signals of concern.

To understand these emissions better, PNNL chemist Judah Friese discussed a technology he has developed, known as Source Term Analysis of Xenon, or STAX. The technology sits right in the emissions stack of an isotope producer and records levels of several xenon isotopes every 15 minutes.

Two STAX systems have been deployed thus far, one at the Australian Nuclear Science and Technology Organisation (ANSTO) and the other at the Institute for Radioelements (IRE) in Belgium. More are being built for deployment at other sites, with the goal of installing the systems at as many medical isotope production facilities as possible.

“With exact measurements right at the point of production from these facilities, we can calculate the levels of the background signals that should be taken into account at detection stations,” said Friese. “With this information, agencies and others monitoring for signatures of nuclear explosions can more easily assess readings, assuring that emissions from medical isotope producers are not misinterpreted."

The STAX technology measures high levels of isotopes and sits mere feet from production. At the other end of the spectrum – detecting ultra-trace levels of radioactive xenon hundreds or even thousands of miles away – is the technology first pioneered by Bowyer in the 1990s. Bowyer reviewed the history of the technology in a recent paper in the Journal of Pure and Applied Geophysics. The research on radioxenon by Bowyer and colleagues at PNNL has been funded by the U.S. Department of Energy’s National Nuclear Security Administration (NNSA) and the U.S. Department of State.

In 1997, Bowyer showed that measuring two different types of radiation decay at the same time would yield precise measurements of trace amounts of isotopes, or different forms, of xenon. The measurement technique, called beta-gamma coincidence, is made of four radioactive isotopes of xenon, known collectively as radioxenon. Since xenon doesn’t react with much in its environment, it provides an excellent, largely intact target for measurement.

Monitoring for noble gas radionuclides is based on air samples collected in the IMS at up to 40 fixed locations around the world to detect and measure isotopes of radioxenon. The proportion of the four xenon isotopes in an air sample provides key information about where the sample originated.

That’s so sensitive that it’s difficult to find a meaningful metaphor. “Some people have said it’s like picking out a needle from a trillion haystacks,” said Bowyer. “Or picking out one word from 20 trillion copies of War and Peace.  It’s as if a person opened a champagne bottle in Tokyo and we knew about it in dozens of locations around the globe in a matter of days, if not hours, by detecting the gas that was released,” he added.

Researcher Jim Hayes and colleagues were recognized with both a Federal Laboratory Consortium award and an R&D 100 award for their work extending and commercializing the Laboratory’s radioxenon detection capability. The technology is licensed to Teledyne Brown Engineering, which partnered with the PNNL team to create a new product, Xenon International, which is now being put through its final paces before becoming available to the international monitoring community.

Xenon International is a monitoring and analysis unit about the size of a refrigerator that is smaller and more efficient than today’s deployed technology. It takes in a much larger air sample than current systems – about 4 cubic meters of air – enabling it to detect lower levels of radioxenon. It does so in half the time of today’s working systems, giving scientists critical extra hours when analyzing a detection.

Innovative solutions to a challenging problem

The advances described in the recent manuscript published in the Journal of Pure and Applied Geophysics provide the capability to interpret and differentiate the signatures of nuclear emissions of industrial applications from those of nuclear explosive testing.

The year 2020 marks the 20th anniversary of the certification of the first radionuclide stations in the IMS. In that time, significant advances have been made in the measurement and understanding of signatures of nuclear explosions. Thanks to a global community of scientists, engineers, technicians, and policy makers, it is now harder than ever to conduct a nuclear explosive test and have it go undetected. At the same time, the recent increase in the need for medical isotopes has made the task of monitoring for such explosions more challenging.

“The outstanding achievements of our researchers and engineers have helped to significantly improve nuclear explosion monitoring capabilities,” said Dr. Brent Park, NNSA deputy administrator for Defense Nuclear Nonproliferation. “I am proud of the work being carried out at our national laboratories on this important international issue.”