Basic research will use electrochemistry to improve direct air capture 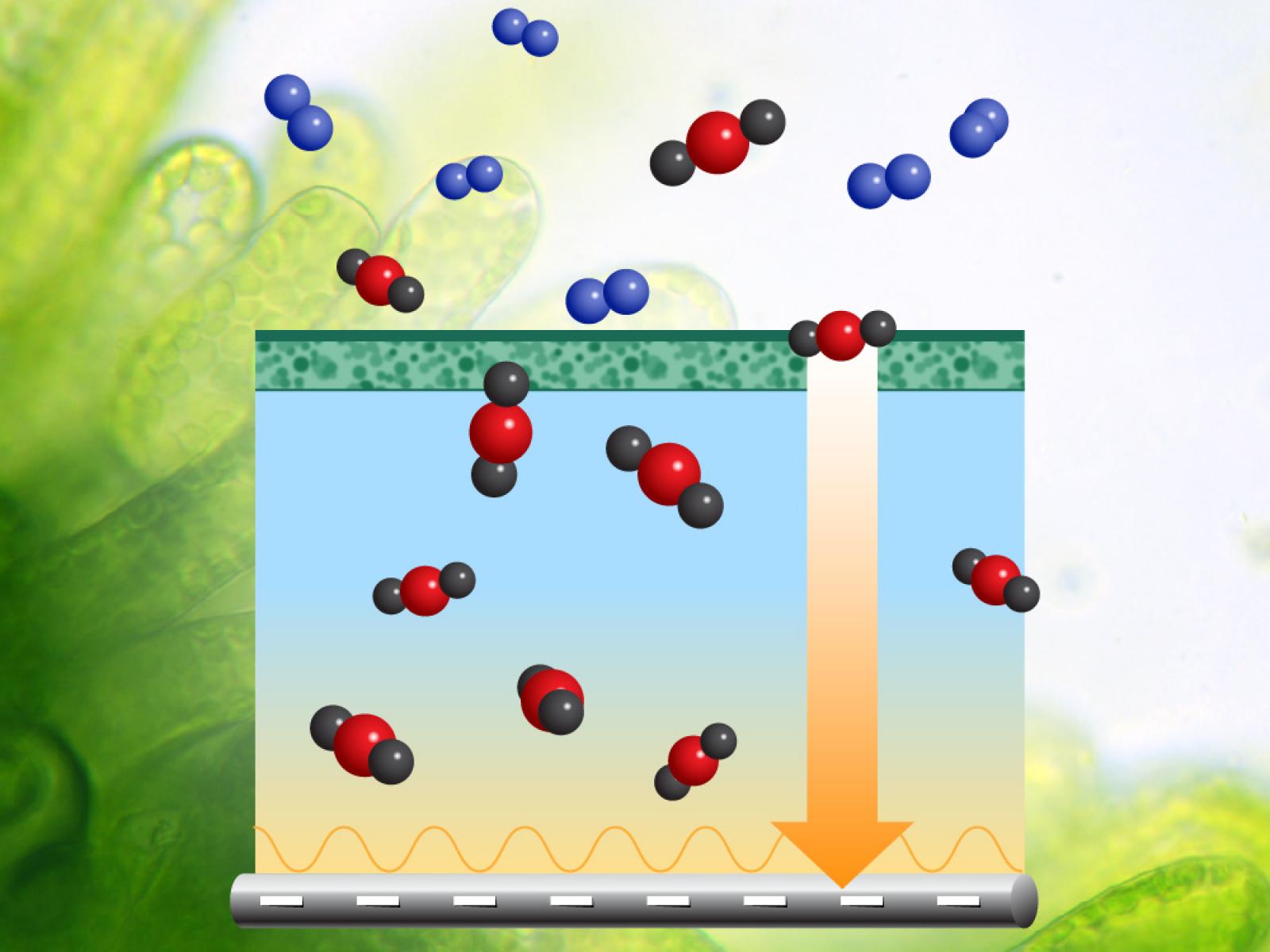 In a new project inspired by natural organisms, PNNL researchers, in collaboration with the Massachusetts Institute of Technology and the University of Alabama, will work to develop an artificial system that captures carbon dioxide from air using electrochemistry.

The researchers will study a three-component system that mimics key functions of microbes that absorb and utilize CO2. An artificial membrane will only allow CO2 into the new system, much like a cell membrane is the first barrier to entering a cell. Then the system will contain a liquid to capture and transport CO2, much like fluid inside a cell. Finally, it will contain an electrocatalyst to provide a beneficial energy gradient like natural enzymes that metabolize CO2.

Carbon capture and utilization technologies aim to capture carbon dioxide gas and either sequester it in underground reservoirs or convert it to useful fuels and other chemicals. Often these technologies use gases emitted during industrial processes. Capturing carbon dioxide from air is more challenging than capturing it in emissions from coal-fired power plants, for example, because CO2 is diluted in air compared to flue gas.

Directly capturing CO2 from ambient air potentially offers the ability to create negative emission technologies that seek to reverse more than 100 years of emissions. To offset the energetic and economic costs of direct capture, carbon dioxide could be used to produce valuable chemical products and potentially even fuels.

A few approaches to directly capture CO2from air are in pilot-scale tests. These methods capture the gas in a liquid or solid material called a sorbant. When enough molecules have accumulated, variations in temperature, pressure, or humidity release the CO2 in a concentrated stream ready for other processes that convert it to fuel and other chemicals or sequester it.

All approaches, however, face the same fundamental challenges: Because CO2 is diluted in ambient air, direct air capture requires a lot of energy to quickly draw the gas onto a surface and release it later. And under those conditions, any surface that strongly binds CO2 is also likely to either hold CO2 so strongly it cannot be removed easily or hold other gases in the air, such as nitrogen and water vapor. If other gases stick to the surface, there is less room to capture CO2.

This funding provides an opportunity for basic research into new ways to address those challenges. The PNNL researchers envision a direct air capture system inspired by microbes that have been doing this process relatively efficiently for millions of years.

The system will contain a membrane that selectively allows CO2 through, filtering out oxygen, nitrogen, and water vapor from the sorbants. After the gas is through the membrane, it encounters a liquid that grabs the CO2 and transports it to an electrode surface.

The electrode is key to reducing the energy needed to attract CO2 to the surface or release it later. The researchers will use electrochemistry to generate active sites that hold CO2 strongly enough to create an energy gradient that funnels the gas to the surface. They could also use electrochemistry to convert surface-bound CO2 into ions that dissolve in the liquid, thus using a chemical reaction to be an energy-efficient way to release the gas from the surface.

For this system to work efficiently, the researchers need to understand how the membrane filtration, liquid transport, and electrochemical reactions influence each other. Rousseau will lead a team of researchers with expertise including chemical theory, electrochemical conversions, CO2 capture solvents and membranes, electrochemical system design, and measurements for advanced characterization of complex systems.

The project is one of three national-laboratory-led efforts awarded for direct air capture research in mid-August under DOE’s “Materials and Chemical Sciences Research for Direct Air Capture of Carbon Dioxide.”

The proposal is, in part, built upon capabilities established in the Chemical Transformations Initiative at PNNL. For the past four years, this group has been developing electrocatalytic systems to convert various dispersed carbon sources, ranging from sewage to carbon dioxide, into fuels.