The U.S. Department of Energy’s Office of Science bestows one of its highest honors on PNNL materials scientist. 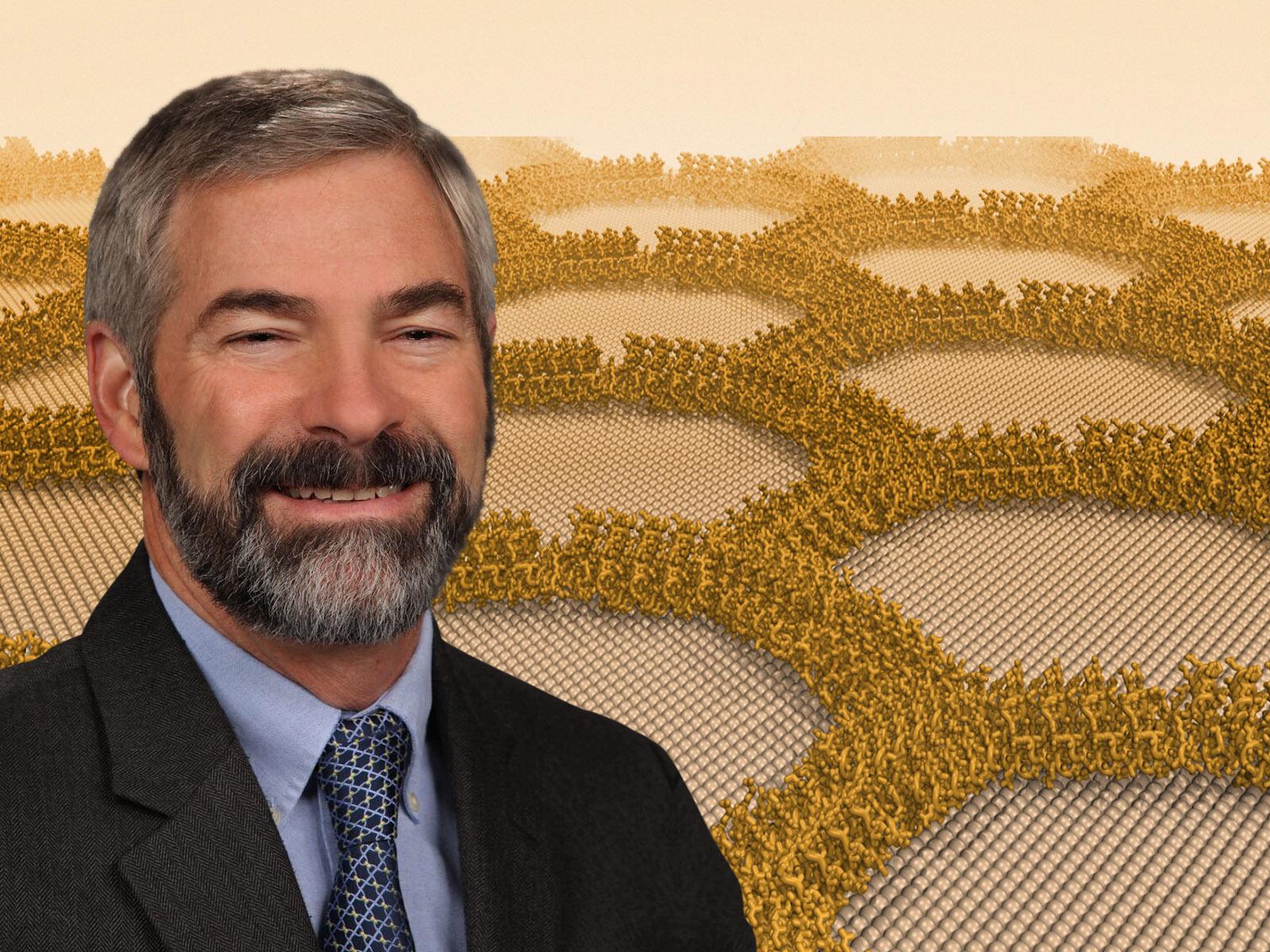 PNNL materials scientist James De Yoreo has been named a Distinguished Scientist Fellow by the US Department of Energy, Office of Science.  Here, he is pictured with an array of self-assembling bioengineered proteins generated through his research in collaboration with the University of Washington.

Background image courtesy of the University of Washington

RICHLAND, Wash.—Materials science pioneer James (Jim) De Yoreo has been named a 2020 “Distinguished Scientist Fellow” by the U.S. Department of Energy’s  Office of Science. De Yoreo is a Laboratory Fellow at DOE’s Pacific Northwest National Laboratory. He co-directs the Northwest Institute for Materials Physics, Chemistry, and Technology, which is a research collaboration between PNNL and the University of Washington, where he is also deputy director for the Center for the Science of Synthesis Across Scales and a professor of materials science and engineering.

De Yoreo will receive $1 million in funding from DOE over three years to pursue new research of his choosing.

Authorized by the America COMPETES Act, the Distinguished Scientist Fellow program is intended to develop, sustain, and promote scientific and academic excellence in DOE Office of Science research through collaborations between institutions of higher education and national laboratories. DOE national laboratory scientists are selected through a highly competitive nomination process. De Yoreo is one of only three individuals to receive the honor in 2020.

De Yoreo was cited for his research over the past 30 years, which has made a tremendous impact in fields as diverse as materials science, geochemistry, and biophysics, with a particular focus on the science of interfaces. Currently, his research focuses on understanding and manipulating interactions, assembly, and crystallization in nanoparticle, biomolecule and mineral systems.

“This award represents a tremendous honor,” De Yoreo said. “More importantly, it provides me with an opportunity to make significant headway in understanding and controlling interfacial processes that underlie a vast array of natural phenomena and technological applications, from biofouling to electrical energy storage.”

He has led prominent programs spanning the nation’s fundamental science agencies, including DOE, the National Institutes of Health, the National Science Foundation, and the Defense Advanced Research Projects Agency. De Yoreo’s four U.S. patents and more than 270 publications have been cited over 17,500 times, and his work has been recognized by many prestigious awards and recognitions.

Through his teaching, organization of workshops and symposia both nationally and internationally, hosting visitors to his laboratories, and service on professional society committees, he has given back to the scientific community. He is also passionate about developing the next generation of scientists, having mentored more than 30 postdoctoral associates and 30 graduate students, as well as early- and mid-career staff.

“Jim De Yoreo is a pioneer in fundamental materials science who has been at the forefront of research that has led to many innovations, from lasers to thermoelectrics to implantable devices. Additionally, his mentoring of students and early career scientists is an example to all. It is truly fitting that he has been recognized by this new and highly competitive award.”  — PNNL Associate Lab Director Louis Terminello

De Yoreo earned his bachelor’s degree in physics from Colby College in 1978 and his masters (1982) and doctoral degrees (1985) in experimental physics from Cornell University. He held several research positions at both Lawrence Livermore and Lawrence Berkeley National Laboratories from 1989 until 2012, when he joined PNNL. He has been on the graduate faculty in the Departments of Materials Science and Engineering and Chemistry at the University of Washington since 2015. Additional honors include being named a Battelle Fellow for his career contributions that dramatically affected the conduct of his field, and receiving the prestigious David Turnbull Award from the Materials Research Society in 2016.