Not “The Jetsons”—But Getting There

PNNL effort could help accelerate roads of the future 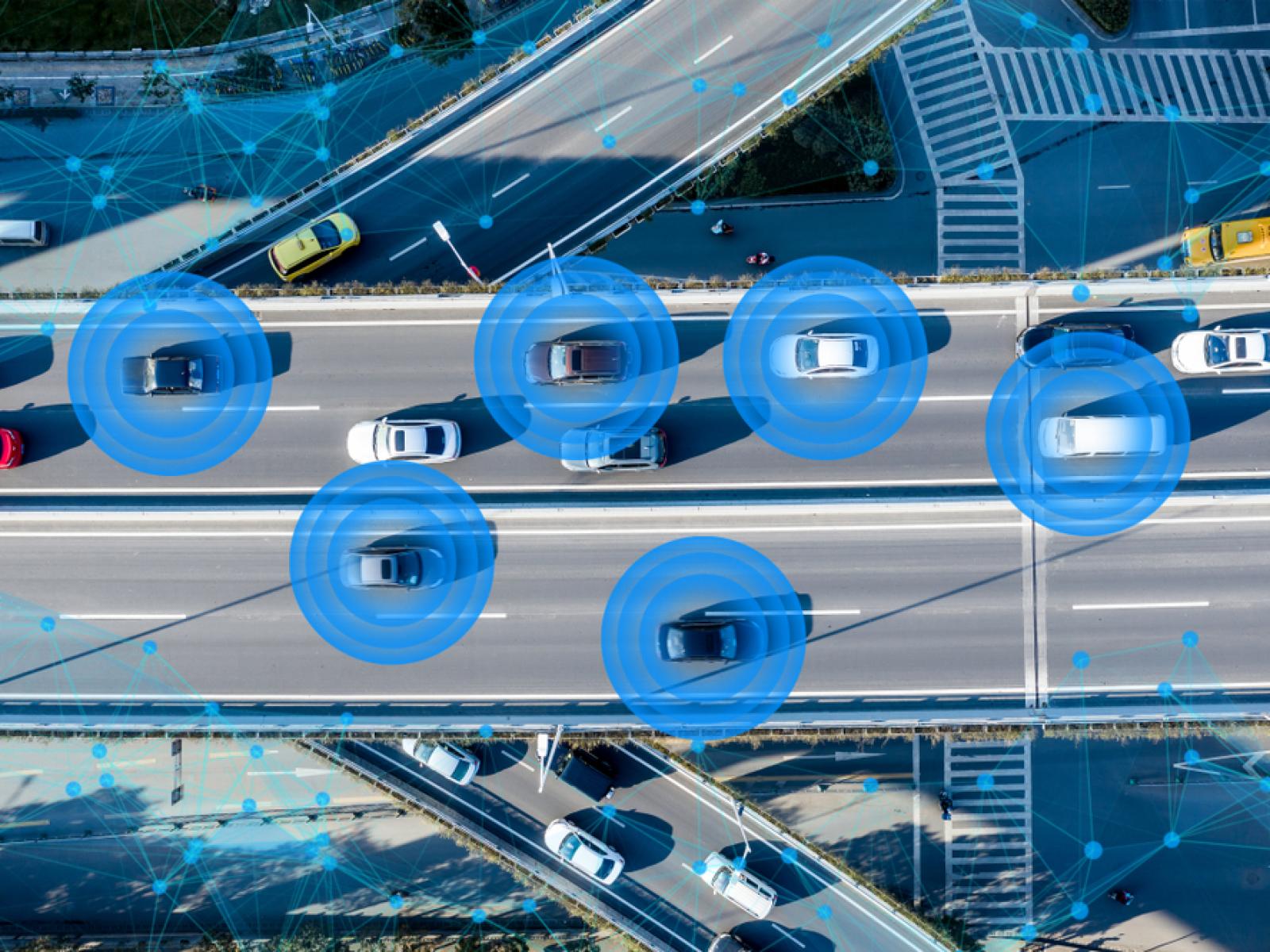 Within a decade or two, some highway systems may be able to automatically coordinate traffic, sending out electronic signals that route cars and their drivers in ways that reduce system congestion and travel time.

Researchers at PNNL are helping to steer this futuristic concept toward reality, though they recognize that much work remains to achieve effective “Infrastructure-To-Vehicle (I2V)” communications and efficient traffic routing. “The sheer complexity of such an endeavor poses many challenges,” says PNNL’s Soumya Kundu, an engineer who led a recent project that explored future traffic networks and put forward several new concepts and potential solutions.

Kundu and his research team considered a scenario in which optimal routing strategies are updated dynamically and in real time based on quickly changing traffic conditions. A control center (or, third-party routing apps similar to Google MapsTM) dispatches these routing instructions and suggestions electronically to different vehicle types:

The control center would gather information from across the traffic network, identifying congestion points, road closures (accidents, construction, etc.) or other delays (e.g., low visibility due to poor weather). The center would then send signals instructing vehicles to turn onto side streets or take other actions that reduce congestion and maintain traffic flow.

“Different from the traditional routing approaches, the focus of our work was on addressing quickly varying traffic volumes,” Kundu explains. “However, a key challenge is the lack of required models and measurements. For example, quickly varying traffic conditions need to be sensed and communicated to the control center, while there also is a need to predict the drivers’ behavior in non-autonomous cars. This creates a number of uncertainties.”

The uncertainties and related challenges drove the research team to develop a framework of tools to advance real-time, and dynamic, routing capabilities. The framework includes an online optimization technique that factors in the different vehicle types and quickly varying traffic conditions to route or re-route a fraction of vehicles in order to minimize the travel time while avoiding road congestion. Of particular interest to the team was understanding the resiliency of the traffic network to cyber-physical disruptions, such as sensor and communication failures and/or physical disturbances caused by accidents and poor weather conditions. The optimization technique provides an alternate approach for real-time adjustments to the routing decisions in the event of issues that might hamper system operations.

The team took a very close look at the “trust factor” of drivers and how human reactions to instructions and subsequent decision-making might affect control system resiliency and effective routing. The researchers developed a real-time control technique that captures rapid changes in driver trust levels and provides insights into how those variations might have an impact on transportation system safety.

“There are many challenges to achieve the transportation system of the future, but there are also many potential benefits. Our results demonstrate that even partial routing control leads to considerable improvements in traffic time, which also may translate to energy savings, as well as overall transportation system efficiency,” Kundu says.

The project’s outcomes are embodied in a research paper, “Resilience of Traffic Networks with Partially Controlled Routing,” which will be presented in July at the American Control Conference in Philadelphia. The conference is organized by the Institute of Electrical and Electronics Engineers’ Control Systems Society.

Kundu partnered on the project with University of California-Riverside faculty member Fabio Pasqualetti and his graduate student, Gianluca Bianchin, who was an intern at PNNL in 2018. Bianchin’s interest in efficient transportation routing intersected with PNNL’s desire to expand its network science and control capabilities to disciplines beyond the power grid and buildings.