A New “Fitbit” for Fish Spills Secret Life of Fish

New Lab-on-a-Fish integrates location, heartbeat, tail beat, and even the temperature of the surrounding environment into one device 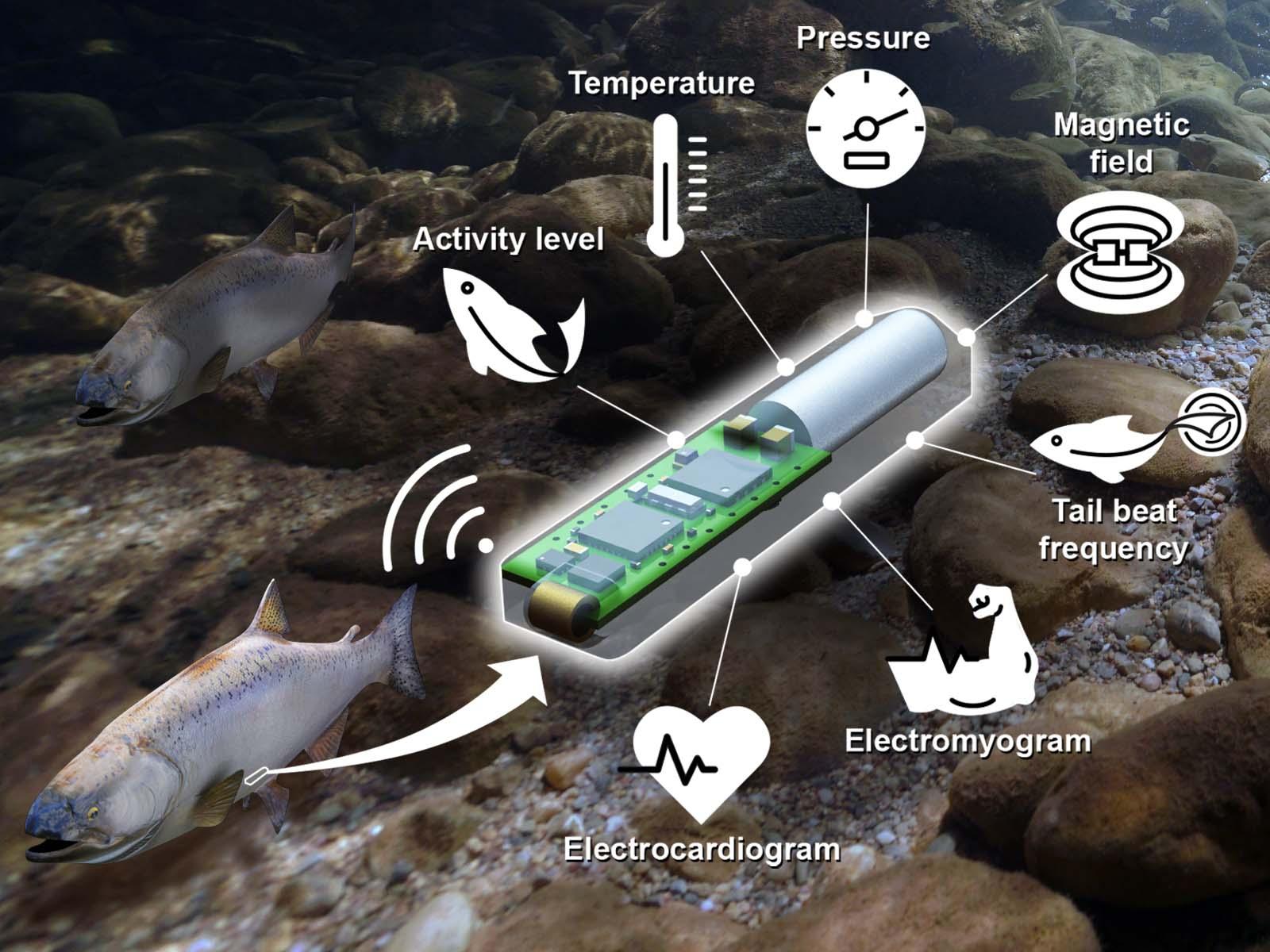 A new fitness tracker that’s very much like a ‘Fitbit for fish’ is revealing new information about fish health and behavior. The first-of-its-kind device uses multiple sensors to wirelessly track what a fish experiences in real-time.

“The Lab-on-a-Fish offers something needed in conservation and aquaculture—a cost-effective way to monitor fish health and behavior,” said Daniel Deng, a Lab Fellow and mechanical engineer at Pacific Northwest National Laboratory (PNNL) whose sensor development team collaborated with the battery team lead by Jie Xiao, a Laboratory fellow and chemist.

The device, a type of biosensor, can simultaneously collect data about a fish, including its location, heartbeat, tail movement, and burned calories, as well as the temperature, pressure, and magnetic field of its surrounding environment. This information can help scientists and managers understand the impact of climate change and infrastructure development on ecosystem health and, in turn, inform future management and conservation strategies.

Learning what stresses fish out

Building on more than a decade of work, Deng and other scientists at PNNL were inspired to develop the Lab-on-a-Fish to help tackle a common challenge for hydropower projects—fish passage. By law, some hydropower facilities must assure that migratory fish species, such as salmon, are able to bypass dams and swim upstream to the rivers where they reproduce. Lab-on-a-Fish not only allows scientists to monitor fish passage success but also to identify whether the fish have encountered any physical stressors at specific points along their journey.

“If we want to know what stresses a fish out, we need to use tracking data and link that with detailed environmental, health and behavior data. This is the first time this information can be integrated in this way,” said Deng.

Historically, fish tags have been limited by the number of sensors that can be put into one device without negatively affecting fish behavior or device longevity. Lab-on-a-Fish weighs 2.4 grams, is about the size of a pen cap, and can collect data for up to eight months. This means scientists can study smaller species for a longer time than possible before.

This award-winning biosensor is surgically inserted under skin near a fish's rear dorsal fins. As the fish swims, a wireless receiver picks up the sensor’s telltale beeps.

Once scientists retrieve the data from a wireless receiver or the device itself, a series of machine learning algorithms can help them tease out patterns among all the measurements.

“It’s not just about getting data, Lab-on-a-Fish also has a built-in algorithm that helps make that data meaningful,” said Deng.

Deng and his colleagues designed the device to assist environmental managers and others in evaluating the environmental performance and safety of hydropower technology and mitigating impacts to wildlife. To date, the device has been successfully tested in the lab on three fish species, including rainbow trout, white sturgeon, and walleye, but its commercial applications extend to other economically important species.

Deng and his team are already developing the next-generation Lab-on-a-Fish, which tailors the device to specific user needs related to hydropower, conservation, and aquaculture. In the future, this technology could help monitor a range of aquatic and terrestrial species, expanding its use and utility.

Those interested in partnering with PNNL or licensing opportunities related to this technology can contact PNNL Commercialization Manager Sara Hunt.