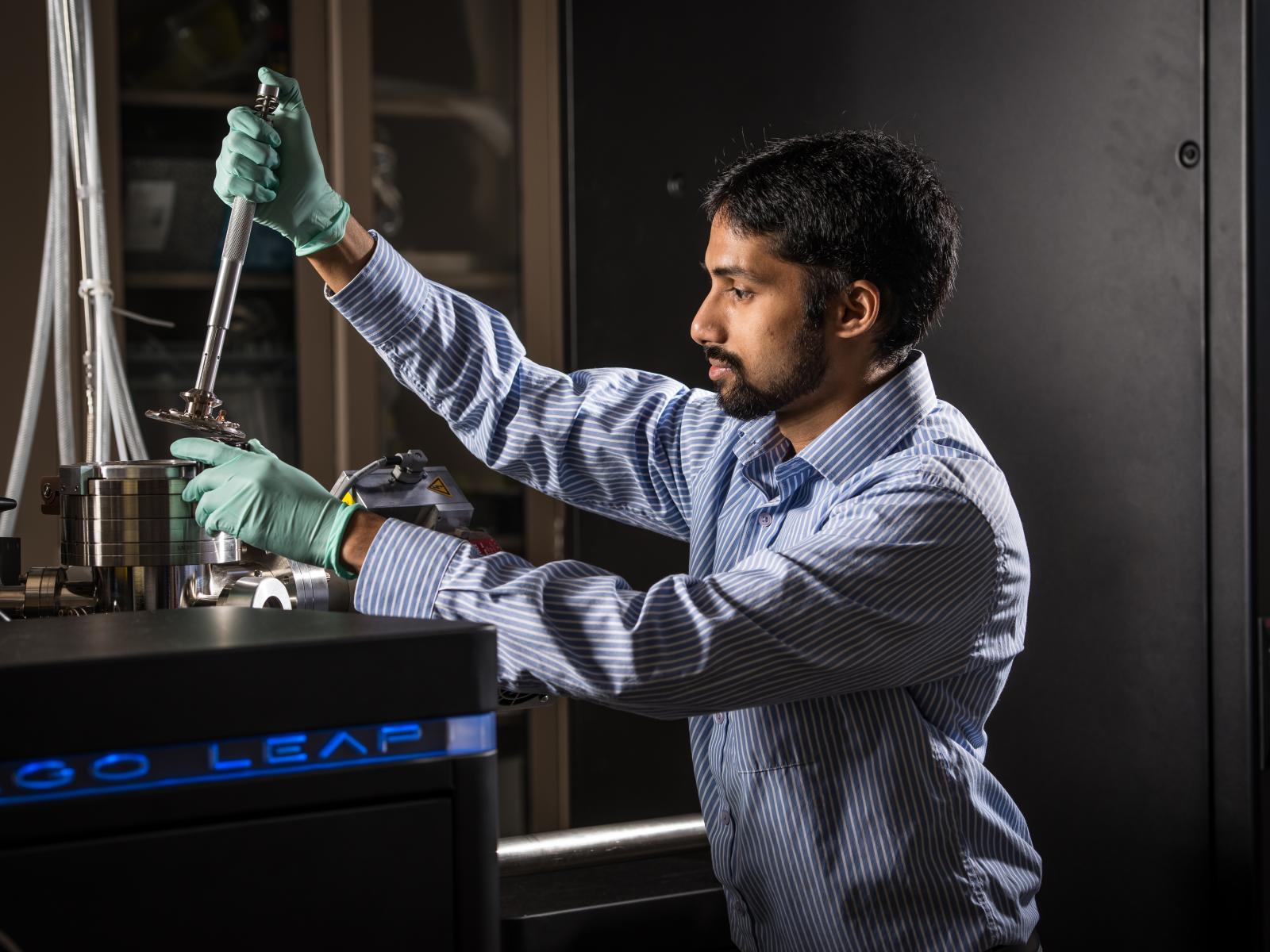 Arun Devaraj at work in the lab.

Ever wonder how tiny creatures can so easily slice, puncture, or sting? New research reveals that ants, worms, spiders, and other tiny creatures have a built-in set of tools that would be the envy of any carpenter or surgeon.

A recent study, published in the Nature journal Scientific Reports, shows for the first time how individual atoms of zinc are arranged to maximize cutting efficiency and maintain the sharpness of these exquisitely constructed tiny animal tools. A collaboration between a research team at the University of Oregon and the U.S. Department of Energy’s (DOE’s) Pacific Northwest National Laboratory (PNNL) revealed nature’s solution to enable tiny creatures to cut and puncture with relative ease.

When the ant bites

Consider the ant tooth. Yes, ants have teeth, as anyone who has ever stepped on an ant mound can attest. These specialized structures, technically called “mandibular teeth” because they are attached outside of their mouths, are made of a network of material that tightly binds individual atoms of zinc. The total effect is a mandible that packs more than 8 percent of the tooth weight with zinc.

These kinds of specialized critter tools have been a decades-long fascination for University of Oregon associate professor Robert Schofield, who led this study. His team of biophysicists has developed techniques to measure the hardness, elasticity, energy of fracture, abrasion resistance, and impact resistance on a miniature scale.

But they couldn’t actually see the structure of the materials that make up ant teeth and other microscopic animal tools, especially at the atomic scale. That’s where PNNL materials scientist Arun Devaraj and doctoral intern Xiaoyue Wang entered the picture. Devaraj is an expert in the use of a specialized microscope technique called atom probe tomography. He used a focused ion beam microscope to take a tiny needle sample from the tip of an ant tooth and then imaged that needle sample using atom probe tomography, allowing the team to identify how individual atoms are arranged near the tip of an ant tooth.

Using this technique, Devaraj and Wang recorded for the first time the nanoscale distribution of zinc atoms in the ant tooth.

“We could see that the zinc is uniformly distributed in the tooth, which was a surprise,” said Devaraj. “We were expecting the zinc to be clustered in nano-nodules.”

The research team estimated that, because these biomaterials can be sharper, they make it possible for the animals to use 60 percent or even less of the force that they would have to use if their tools were made of materials similar to that found in human teeth. Because less force is required, their smaller muscles spend less energy. These advantages may explain why every spider, ant, other insects, worms, crustaceans, and many other groups of organisms have these specialized tools.

“Human engineers might also learn from this biological trick,” said Schofield. “The hardness of ant teeth, for example, increases from about the hardness of plastic to the hardness of aluminum when the zinc is added. While there are much harder engineering materials, they are often more brittle.

Learning from nature is one way of understanding what makes materials stronger and more damage-resistant, added Devaraj. He is currently using a DOE Early Career Award to study, at the atomic scale, principles that make some materials strong and damage resistant. “By studying steel microstructure also at the atomic scale, we can better understand how altering the composition of materials changes its damage resistance, specifically stress corrosion resistance and behavior over time,” he said. “This is especially important for designing structures like nuclear power plants that need to withstand aging for many decades.”

The research study was supported by the National Science Foundation-supported research Center for Advanced Materials Characterization, a University of Oregon-based facility. A portion of the work was conducted at the Environmental Molecular Sciences Laboratory (EMSL), a DOE Office of Science user facility at PNNL in Richland, Washington.