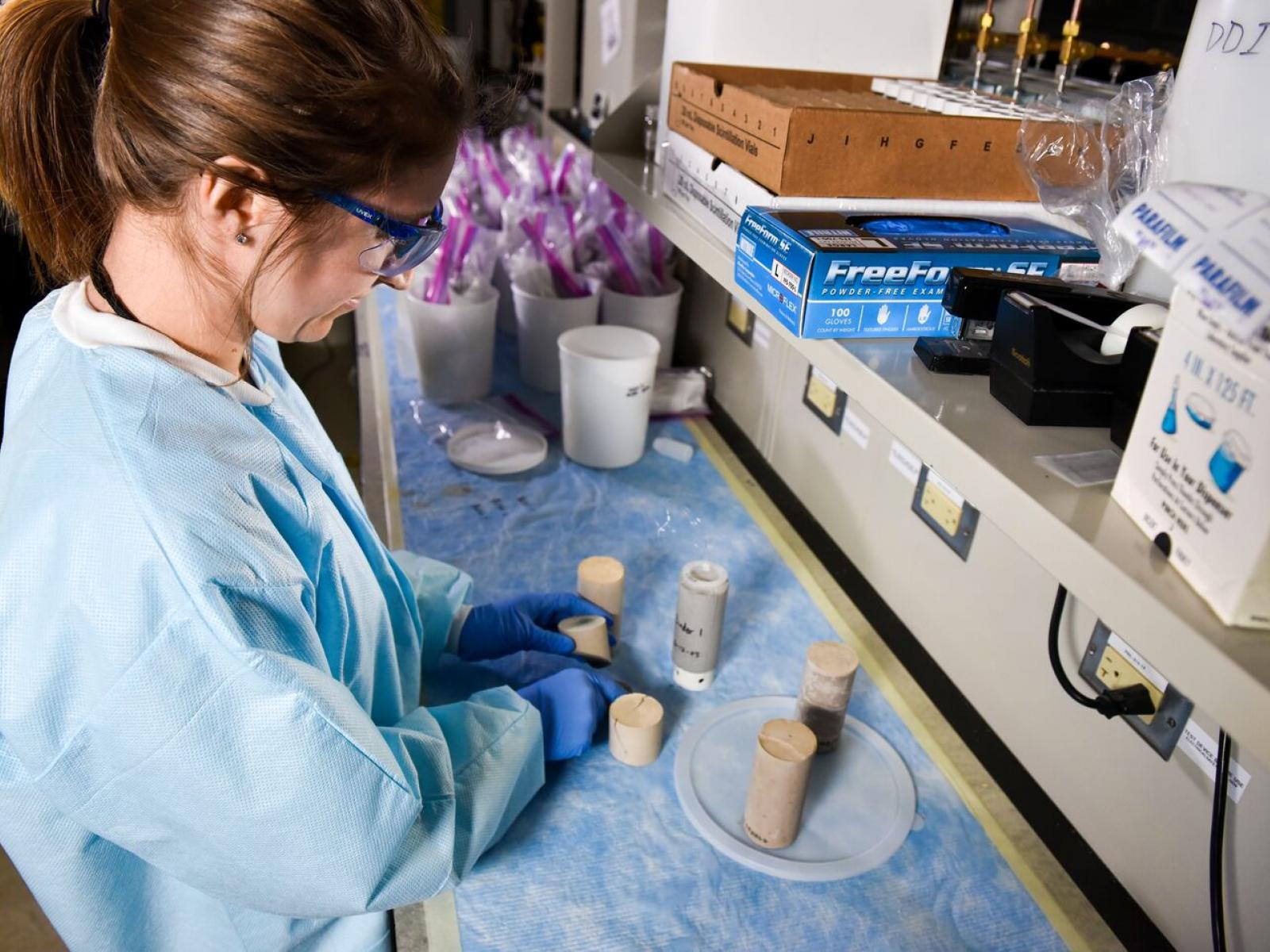 Researchers have discovered that a mineral found naturally in cement—ettringite—can latch on to and detain a wily and worrisome radioactive contaminant.

The contaminant is pertechnetate, an oxidized form of the radionuclide technetium, which is commonly found in nuclear waste.

“Pertechnetate has an international reputation for being extremely mobile in natural environments if released from its host waste form. It poses a potential hazard to the public and environment,” says Sarah Saslow, a chemist at Pacific Northwest National Laboratory (PNNL).

Saslow led a team of scientists from PNNL and the University of Sheffield in the United Kingdom that explored ettringite’s ability to control the contaminant’s wandering ways. By applying techniques and instruments at two U.S. Department of Energy (DOE) Office of Science user facilities—the Environmental Molecular Sciences Laboratory, a DOE Office of Science user facility at PNNL in Washington State, and the Stanford Synchrotron Radiation Lightsource at the SLAC National Accelerator Laboratory in California—the researchers have presented the first experimental evidence that ettringite’s crystal structure can readily incorporate and hold (immobilize) pertechnetate.

“This immobilization capability has the potential to reduce risk at nuclear waste disposal sites in the U.S. and abroad and provide additional approaches for the successful treatment and long-term storage of nuclear waste,” Saslow says. “Because ettringite already is in the cement that’s often used to encapsulate waste, we can now focus on finding ways to optimize its presence and effectiveness. Our findings also may be applicable to other minerals in the cement.”

Indeed, long-term storage of legacy waste is one of the keen challenges facing scientists and engineers who seek to develop storage forms—such as glass and cement—that effectively contain radioactive waste materials for centuries. The waste, generated from past nuclear reactor operations, is held at commercial and government locations around the world, including DOE’s Hanford Site near PNNL in Richland, Washington.

Technetium, a product of fission in nuclear reactors, is part of this large waste inventory and poses significant threats to people and the environment. In liquid waste, technetium often persists as pertechnetate. Current methods that contain pertechnetate in cement require introduction of chemical additives that reduce pertechnetate to a non-mobile form. However, the additives may lose their effectiveness over time, which makes for a time-limited solution.

“Slowing the release of technetium, as unaltered pertechnetate, from cement waste forms remains one of the most persistent fundamental and applied research challenges in nuclear waste treatment, immobilization, and storage,” Saslow notes.

In cement, minerals constantly dissolve and precipitate, a phenomenon that contributes to the formation of ettringite.

Working from a scientific theory that ettringite can capture and hold pertechnetate, the research team explored the concept more deeply in a project that spanned two-and-a-half years and included use of instrumentation at PNNL and SLAC. Researchers traveled between the sites, conducting multiple experiments that employed aqueous precipitation, simulation, and characterization techniques.

The research team determined that a sulfate substitution process is the cornerstone of ettringite’s ability to immobilize pertechnetate. In the cement, ettringite’s crystal structure, much like a fickle roommate, essentially expels sulfate and welcomes pertechnetate. The knowledge of this substitution process can help researchers develop cement formulations that rapidly create an optimum ettringite barrier and prevent pertechnetate from leaving. Ideally, scientists will find ways to enhance barrier formation by investigating the interactions of radionuclides and other minerals so that the formation process continues throughout the life cycle of the cement waste form.

“This is an important advance in the development of new technologies for technetium immobilization,” says the University of Sheffield’s Claire Corkhill, co-author of the study. “Now that ettringite has proven to be an effective 'sponge' for this problematic radioactive element, we can work to design new ettringite-rich cements to encapsulate it and inform the construction of radioactive waste disposal facilities being developed across Europe.”

The research team’s findings are showcased in the paper, Immobilizing Pertechnetate in Ettringite via Sulfate Substitution, published in the September 10, 2020, online edition of ACS Environmental Science & Technology (DOI: 10.1021/acs.est.0c03119) and as a supplemental cover article for the November 3, 2020, print edition.

The research was supported by Saslow’s project in PNNL’s Nuclear Process Science Initiative, a multi-year, internally funded effort that concluded in September 2020. Saslow says that while there’s no immediate follow-on research planned, ettringite’s promise as a waste treatment resource has generated considerable interest.