A study raises questions about how far droplets, like those that carry the virus that causes COVID-19, can travel before becoming harmless 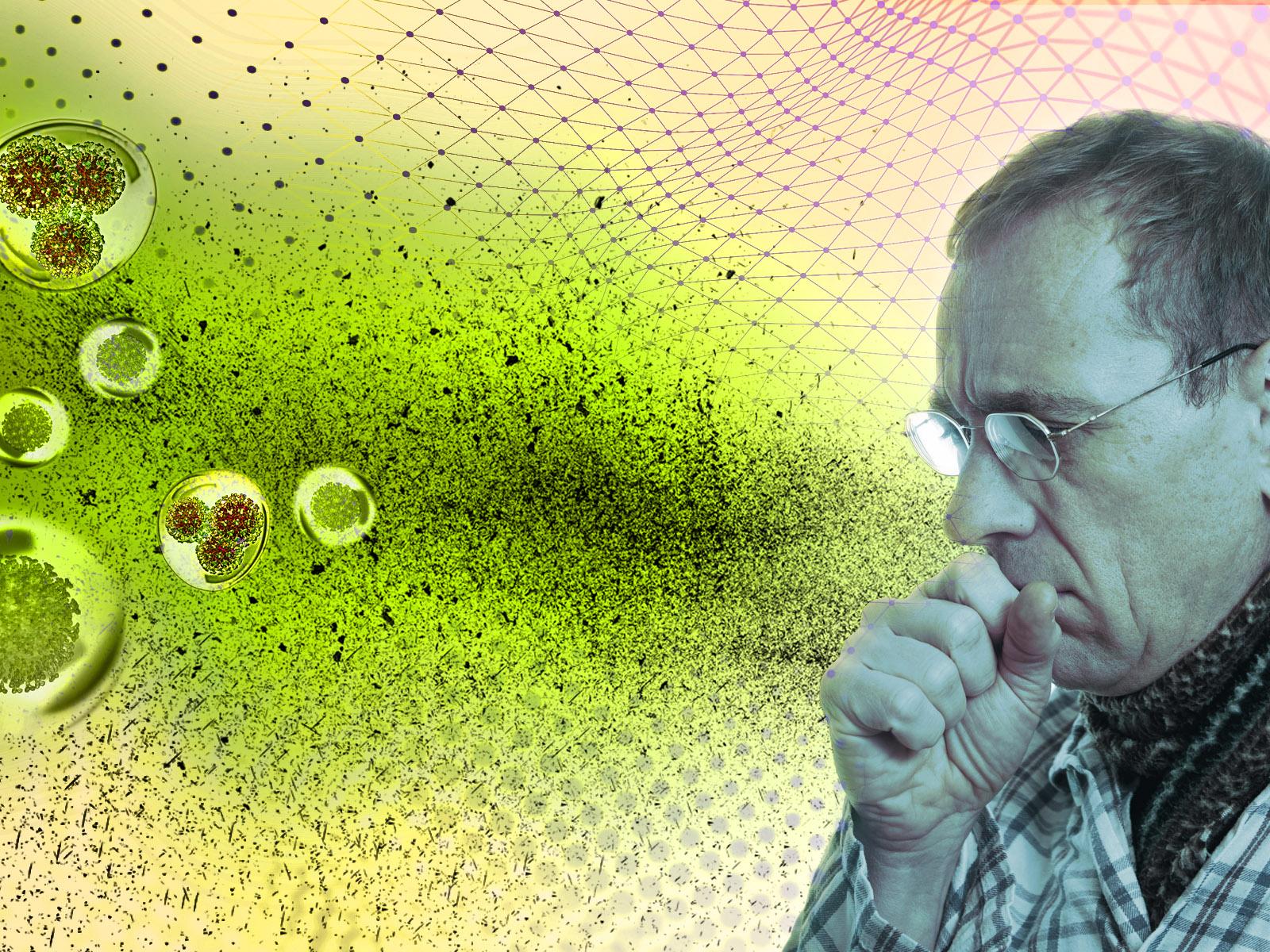 The mucus that covers respiratory droplets allows viral particles to remain infectious farther than previously thought, according to a modeling study published in February.

RICHLAND, Wash.—A modeling study raises questions about how far respiratory droplets, like those that transmit the virus that causes COVID-19, can travel before becoming harmless. Can the airborne particles that carry the virus remain infectious not just for a few feet but rather more than 200 feet, farther than the length of a hockey rink?

Experiments dating to the 1930s proposed two paths for respiratory droplets like those from a sneeze or cough. Either they are big and heavy, plummeting to the ground without much chance of infecting another person. Or they are so small and light that they dry out almost instantly, remaining airborne but becoming harmless very quickly. The dryness renders “enveloped” viruses like coronaviruses unable to infect.

But a new study from scientists at the Department of Energy’s Pacific Northwest National Laboratory suggests a third option—that small respiratory particles can remain moist and airborne for a longer time and greater distance than scientists have recognized.

“There are reports of people becoming infected with a coronavirus downwind of an infected person or in a room several minutes after an infected person has exited that room,” said Leonard Pease, the corresponding author of the study. The findings were published in the February issue of the journal International Communications in Heat and Mass Transfer.

“The idea that enveloped virions may remain well hydrated and thus fully infective at substantial distances is consistent with real-world observations. Perhaps infectious respiratory droplets persist longer than we have realized,” Pease added.

The PNNL team took a long look at the mucus that coats the respiratory droplets that people spew from their lungs. Scientists know that mucus allows many viruses to travel further than they otherwise would, enabling them to journey from one person to another.

Conventional wisdom has been that very small, aerosolized droplets of just a few microns, like those produced in the lungs, dry out in air almost instantly, becoming harmless. But the PNNL team found that mucus changes the equation.

The team found that the mucus shell that surrounds respiratory droplets likely reduces the evaporation rate, increasing the time that viral particles within the droplets are kept moist. Since enveloped viruses like SARS-CoV-2 have a fatty coating that must be kept moist for the virus to be infectious, the slower evaporation allows viral particles to be infectious longer.

The team estimates that droplets encased in mucus could remain moist for up to 30 minutes and travel up to about 200 feet.

“While there have been many factors proposed as variables in how COVID spreads,” said Pease, “mucus remains largely overlooked.”

The focus on mucus helps address another question: how the virus moves in a multiroom office building.

Hitching a ride within respiratory droplets is the first step for the virus to become airborne and infect those who breathe it in. Chemist Carolyn Burns had the task of creating artificial, respiratory-like droplets to study how the particles moved from room to room.

Ultimately, Burns settled on two substances to carry artificial virus-like particles. One was bovine mucus; the other was sodium alginate, a compound derived from brown seaweed. The compound is commonly used as a thickening agent in foods like ice cream and cheese.

The team used an airbrush to disperse droplets in one room of a multiroom laboratory building. Together, the droplets and airbrush simulated a person’s coughing fit, releasing particles for about one minute in a source room. A team led by Alex Vlachokostas and Burns measured droplet levels in two adjoining rooms with controlled building ventilation.

The team’s experimental findings, published Jan. 19 in Indoor Air, echo the findings of its previous modeling study, published last year in the journal Building and Environment.

The scientists found that both low and high levels of filtering were effective at reducing levels of respiratory droplets in all rooms. Filtration quickly cut down the levels of droplets in the adjoining rooms—within about three hours, to one-third the level or less without filtration.

The team also found that increasing ventilation rapidly reduced particle levels in the source room. But particle levels in the other connected rooms jumped immediately; levels spiked 20 to 45 minutes later with vigorous air changes increasing the spike. Ultimately, after the initial spike, levels of droplets in all the rooms gradually dropped after three hours with filtration and after five hours without it.

The scientists say that increased air exchange for crowded spaces may be beneficial in certain situations, like large conferences or school assemblies, but in normal work and school conditions, it may actually increase transmission rates throughout all rooms of a building.

“If you’re in a downstream room and you’re not the source of the virus, you probably are not better off with more ventilation,” said Pease.

Both projects were funded through the National Virtual Biotechnology Laboratory, a consortium of all 17 DOE national laboratories focused on response to COVID-19, with funding provided by the Coronavirus Aid, Relief, and Economic Security (CARES) Act. The projects are among several studies at PNNL to learn more about the SARS-CoV-2 virus and COVID-19.