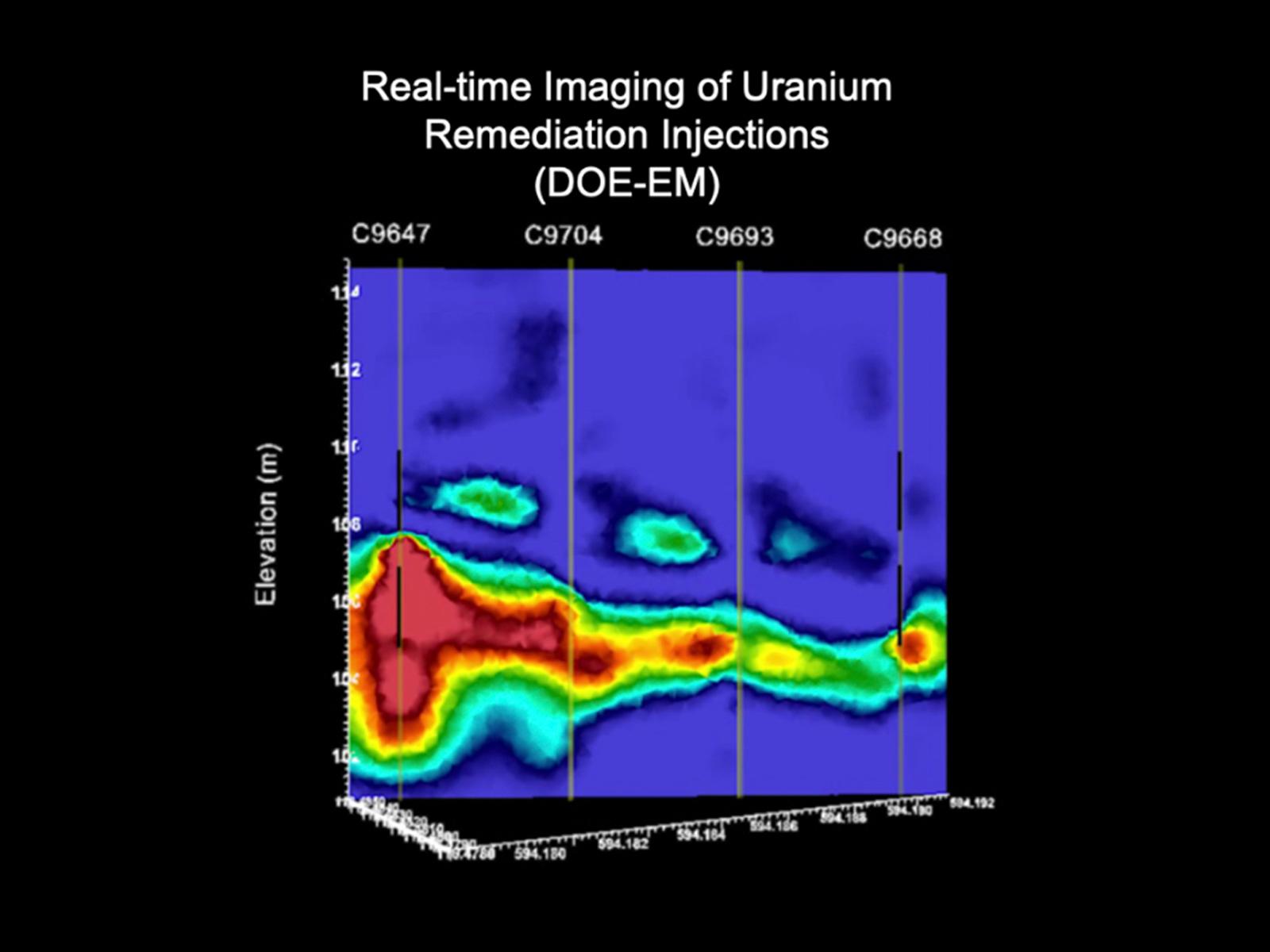 E4D uses electrical resistivity tomography (ERT) measurements to reconstruct time-lapse images of the electrical conductivity of the soil. This is a screenshot of the real-time subsurface imaging of uranium remediation injections for a DOE Office of Environmental Management project.

“A larger suite of capabilities can now be used by the nuclear industry in decision-making for radiologically contaminated sites,” said Vicky Freedman, PNNL soil and groundwater program manager.

E4D uses electrical resistivity tomography (ERT) measurements to reconstruct time-lapse images of the electrical conductivity of the soil. Instead of using boreholes to determine the location of active subsurface contaminants, E4D helps define where radiological contaminants might be and any pathway where humans or sensitive environmental areas could be exposed.

Geophysical scientist and main E4D creator Tim C. Johnson has described the 3-D geophysical modeling and inversion program as, “it’s sort of like using infrared goggles to see heat signatures in the dark, except this is underground—there is no direct line of sight.”

“All the capability updates of E4D are fully qualified,” Freedman said, noting that the approval process is both thorough and difficult. “A lot of codes don’t reach that NQA-1 standard. E4D is open source, it’s cutting edge, and it’s reached that standard.”

E4D is highly scalable and can be used on systems ranging from laptop computers to state-of-the-art supercomputing systems. Examples of E4D’s use in the field include the characterization of hazardous nuclear waste beneath underground tanks, tank leak detection, river-stage intrusion, and paleochannel detection. At the Hanford Site in Washington State, E4D is used to help monitor uranium cleanup progress. The largest static ERT inversion to date had about 5,000 electrodes, 220,000 measurements, and 3 million inversion parameters and was executed on National Energy Research Scientific Computing Center supercomputing resources using 10,000 processors.

E4D is a freely available open-source code available through PNNL’s GitHub website, although one module—the metallic infrastructure modeling and inversion module, which explicitly allows incorporation of buried metallic objects—is only available through a site license that is free to government and academic entities.

E4D joins other PNNL-developed open-source software, including the variably saturated STOMP and eSTOMP modes, that are also NQA-1 qualified.

The ASME NQA-1 Certification Program provides centralized, independent, third-party certification to meet the needs of the nuclear industry by expanding the supply chain with organizations who are committed to providing high-quality products and services. ASME develops standards as a means of complying with government regulations for nuclear facility applications, including those set by DOE and the U.S. Nuclear Regulatory Commission.