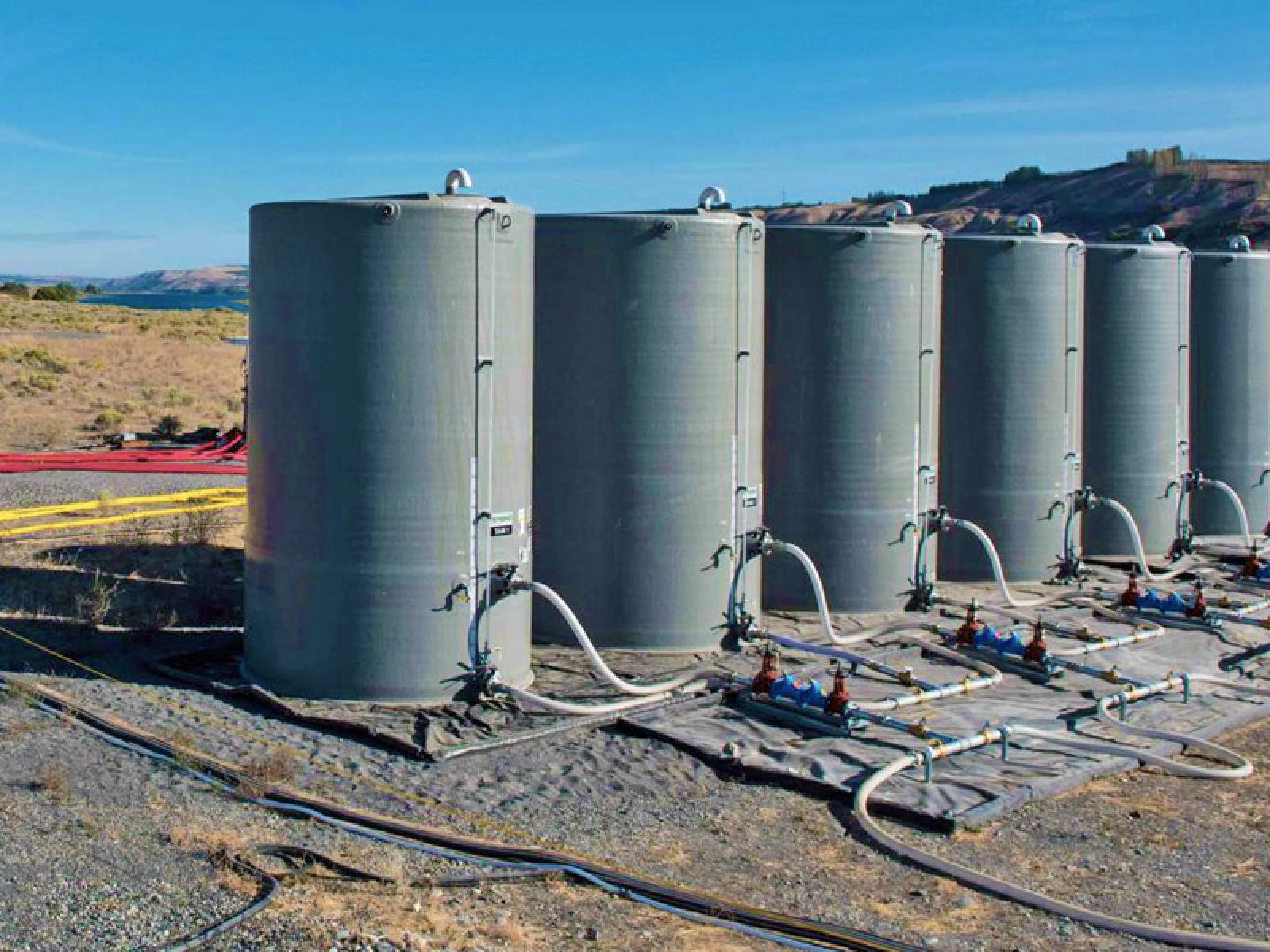 Surrounded by storage tanks and injection hoses, PNNL's E4D subsurface imaging technology monitors the delivery of a phosphate solution for binding contaminants in the soil at the Hanford Site's 300 Area near the Columbia River.

At the southern tip of the sprawling Hanford Site, the soil beneath the 300 Area

contains residual uranium from a handful of now-removed settling ponds and trenches that stored liquid waste from the processing of spent nuclear fuel rods. Located about a quarter-mile west of the Columbia River shoreline, underground uranium concentrations remain high after years of plutonium production.

The Department of Energy Richland Operations and its site contractor CH2M HILL Plateau Remediation Company (CHPRC) recently finished injecting an approved polyphosphate solution into the ground that will bind with uranium through a process called sequestration, preventing the uranium from reaching the groundwater and Columbia River.

PNNL researchers worked with CHPRC to successfully implement a state-of-the-art approach for monitoring the delivery of the polyphosphate remediation action. The approach used PNNL’s Real-time Four-Dimensional Subsurface Imaging Software, or E4D, to image the vertical and lateral movement of the polyphosphate solution.

“It’s sort of like using infrared goggles to see heat signatures in the dark, except this is underground—there is no direct line of sight,” said Tim Johnson

, senior geophysicist at PNNL and lead developer of the E4D software. “With E4D, data collected by remote sensors are processed by a computer tomography algorithm to produce an image that reflects the environment.”

The polyphosphate remedy, delivered at two depths from a patchwork of 48 total injection wells, spread through the soil. To help the site contractor “see” the spread of the phosphate solution underground, PNNL placed its ERT sensors in a unique cross-hole pattern within clusters of injection and monitoring wells.

During the phosphate solution injections, the ERT system injected electrical current into the subsurface. Sensors running the length of each well measured the corresponding changes in soil voltage.

Those measurements instantly traveled via wireless internet to Constance, a supercomputer at PNNL’s Institutional Computing Center. There, Constance began processing the data, combining geology, physics, mathematics and chemistry with E4D’s sophisticated modeling software to create time-lapse three-dimensional images of the solution and its location—all within minutes.

As the E4D software executed its program, color-coded pools quickly began appearing on the display. Through a custom web interface, the science team, operations staff and key stakeholders at multiple locations watched the mobility of the phosphate solution in near real-time—the fourth dimension in E4D.

Within minutes of data acquisition, the E4D modeling software translated that information into images for onscreen display. 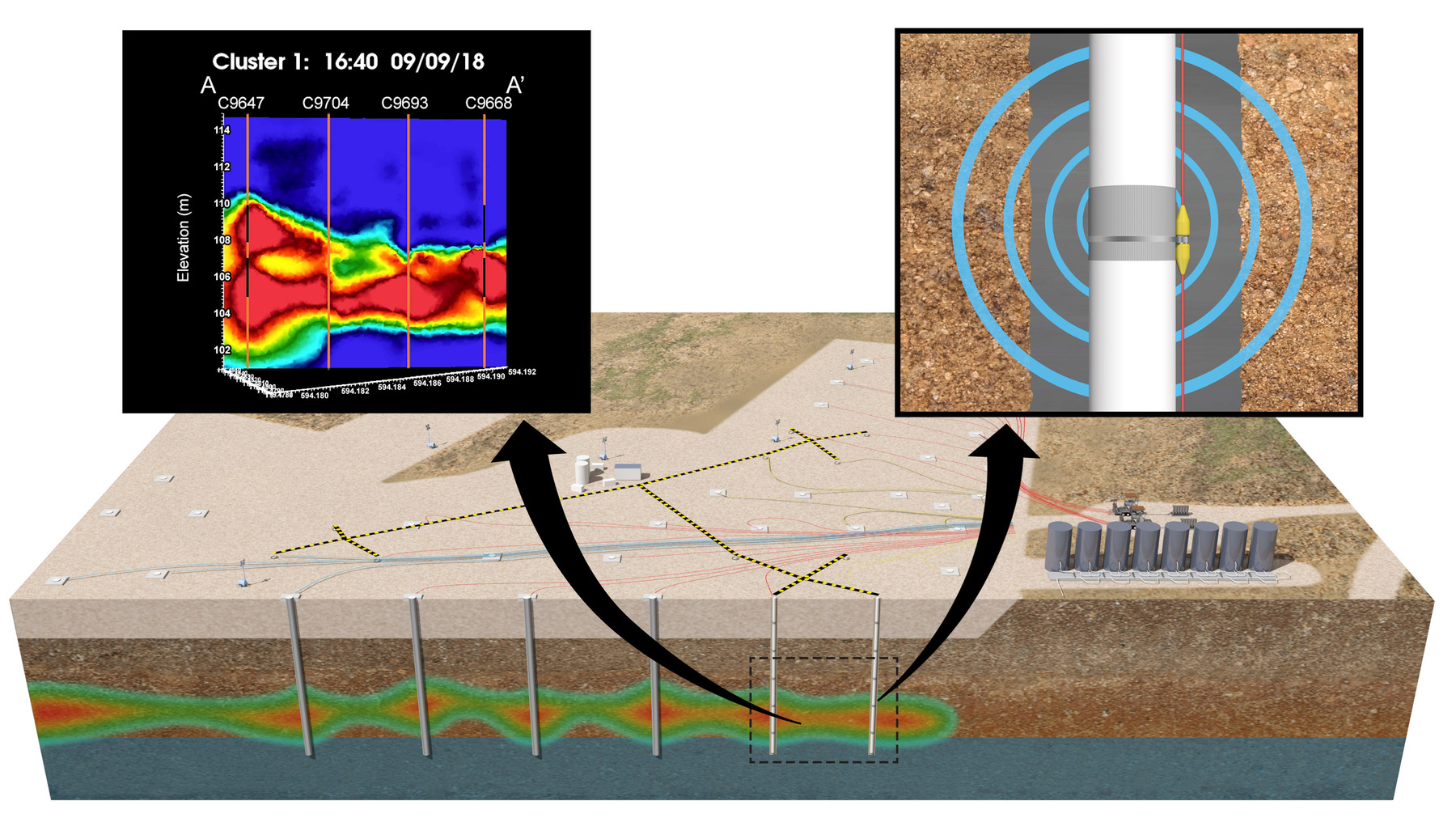 “We really appreciate the collaboration with PNNL on being able to use this technology,” said Marty Doornbos, CHPRC’s director of groundwater remedy selection and implementation. “It allowed us to monitor and verify the progress in real time to help ensure we reduce this risk to the Columbia River.”

Breathing Life into the Data

Over the course of three weeks, the compiled images revealed a noticeable “breathing” pattern. The colored pools appeared as the injections took place during the day shift, then tapered off overnight, then reappeared as injections started again the next day.

“Right off the bat it looked like the new monitoring technique was working as well as or better than expected,” said Rob Mackley

, a hydrogeologist at PNNL and manager of PNNL’s technical support on the project. “After two weeks of data, we knew it was a home run.”

named it one of the 100 most innovative scientific breakthroughs of the year.