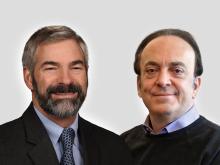 De Yoreo and Karniadakis Elected to the National Academy of Engineering

The two researchers are among the 111 new members elected in 2022.

Karniadakis interviewed for deeponet features in quanta magazine and techxplore.com

George Em Karniadakis received the 2021 SIAM/ACM Prize in Computational Science and Engineering. The award is presented every two years by the Society for Industrial and Applied Mathematics (SIAM) and the Association for Computing Machinery (ACM) in recognition of outstanding contributions to the development and use of mathematical and computational tools and methods for the solution of science and engineering problems. The prize will be awarded at the 2021 SIAM Conference on Computational Science and Engineering to be held virtually March 1-5, 2021. Photo courtesy of George Karniadakis.

Congratulations to Nat Trask, Sandia National Laboratories, who recently won an Early Career Research Program award from the U.S. Department of Energy for his proposed project on machine learning. The proposed project aims to help scientists use the laws of physics to view multiscale physical events with a clarity never before achieved. Such work may require observations over a millionfold change in scale, with features ranging from the meter to microscale. Photo courtesy of Sandia National Laboratories.

Marta D'Elia has joined the committee of the One Nonlocal World, an online platform where people working on nonlocal problems or interested in learning more about this topic can regularly check for updates on nonlocal modeling, analysis, and computation. Nonlocal calculus and modeling is one of the focus areas in PhILMs. Photo courtesy of Marta D'Elia.

Berkeley Lab Alvarez Fellow Yu-Hang Tang was part of a multi-institutional team that won the SC Conference (hashtag#SC19) Best Poster Award. Here's what he had to say: "Winning this award is exciting, but I am even more excited that my software has value to scientists and is facilitating breakthroughs. In the case of the SC19 poster, my code allowed researchers to run simulations on the Summit supercomputer to study nonporous materials, which has applications in studying shale gas extraction. I actually started developing this software, the USERMESO package for LAMMPS, in 2013 before the Summit even existed. Through the years, it has grown and contains about 50,000 lines of code. Then, Idaho National Laboratory researcher Yidong Xia approached me and asked me to help optimize the code to run on Summit. I agreed. Now, this GPU-accelerated code runs up to 39 times faster on 384 GPUs than its CPU counterpart on 2688 CPU cores."

PhILMs team was interviewed by Lawrence Berkeley National Laboratory for their Computing Sciences at Berkeley Lab.

Research from the CRUNCH group has been featured on the cover of the prestigious ACS journal LANGMUIR. The research was a collaborative effort by Kaixuan Zhang, Zhen Li, Martin Maxey and George Karniadakis in partnership with Shuo Chen from Tongji University (Shanghai, China). Shown on the cover are different phases of droplet coalescence dynamics on a hydrophobic surface with hierarchical roughness, in which the colors on the rough wall indicate the distribution of surface structure height, and the wavelets on the liquid droplets represent the thermal capillary waves. View the article.

The study reports a novel self-cleaning mechanism of textured surfaces attributed to a spontaneous coalescence-induced wetting transition, which explains why droplets on rough surfaces are able to change from the highly adhesive Wenzel state to the low-adhesion Cassie-Baxter state and achieve self-cleaning. The study also reports that the spatial distribution of liquid components in the coalesced droplet can be controlled by properly designing the overall arrangement of multiple droplets. The findings offer new insights for designing effective biomimetic self-cleaning surfaces by enhancing spontaneous Wenzel-to-Cassie wetting transitions, and additionally, for developing new noncontact methods to manipulate liquids inside the small droplets via multiple-droplet coalescence.

Recent research from the CRUNCH group has been featured on the back cover of the prestigious RSC journal Soft Matter. This highlighted work was performed in the group of Prof. George Karniadakis from the Division of Applied Mathematics, Brown University, in collaboration with the group of Prof. Chao Yang from the Institute of Process Engineering, Chinese Academy of Sciences. Shown on the cover is a snapshot of multiscale simulation of a shear flow past an endothelial glycocalyx layer in a microchannel, with the atomistic resolution locally (water molecules, heparan sulfate chains, lipid bilayer and transmembrane proteins) and the coarse-grained resolution in bulk domain. View the article.

The U.S. Department of Energy's Pacific Northwest National Laboratory (PNNL) has been tapped to lead a $10 million, four-year effort to uncover hidden physics using new developments in deep learning, a computing technique that harnesses the power of machine learning and big data.

The Physics-Informed Learning Machines for Multiscale and Multiphysics Problems (PhILMs) Center, is a collaboration among PNNL and Sandia National Laboratories, with academic partners at Brown University, Massachusetts Institute of Technology, Stanford University, and the University of California, Santa Barbara.

The PhILMs collaborators are working together to adapt advanced computing techniques to help solve long-standing problems in science and engineering.

"The most difficult problems in modern physics and engineering involve computing at vastly different scales and across large data sets," said George Karniadakis, the Center Director, who holds a joint appointment at PNNL and Brown University. "By combining the expertise of mathematicians, programmers, and specialists in machine learning techniques, and focusing that expertise on these physics problems, we are aiming to bring new tools to the global physics community."

The research team plans to create, test, and release new open-source computational tools developed through the collaboration and make them freely available through the team's PhILMs website.

The initial research goals include developing computational frameworks based on deep learning algorithms for applications in combustion, subsurface, and earth systems, as well as machine learning tools for the design of functional materials with tunable properties. Ultimately, the researchers hope to establish scientific machine learning as a new meta-discipline at the intersection of computational mathematics, big data, and deep learning.

The collaboration is supported by the Applied Mathematics Program within the U.S. Department of Energy, Office of Advanced Scientific Computing Research.