Wind Power off the Oregon Coast Could Provide More than Electricity 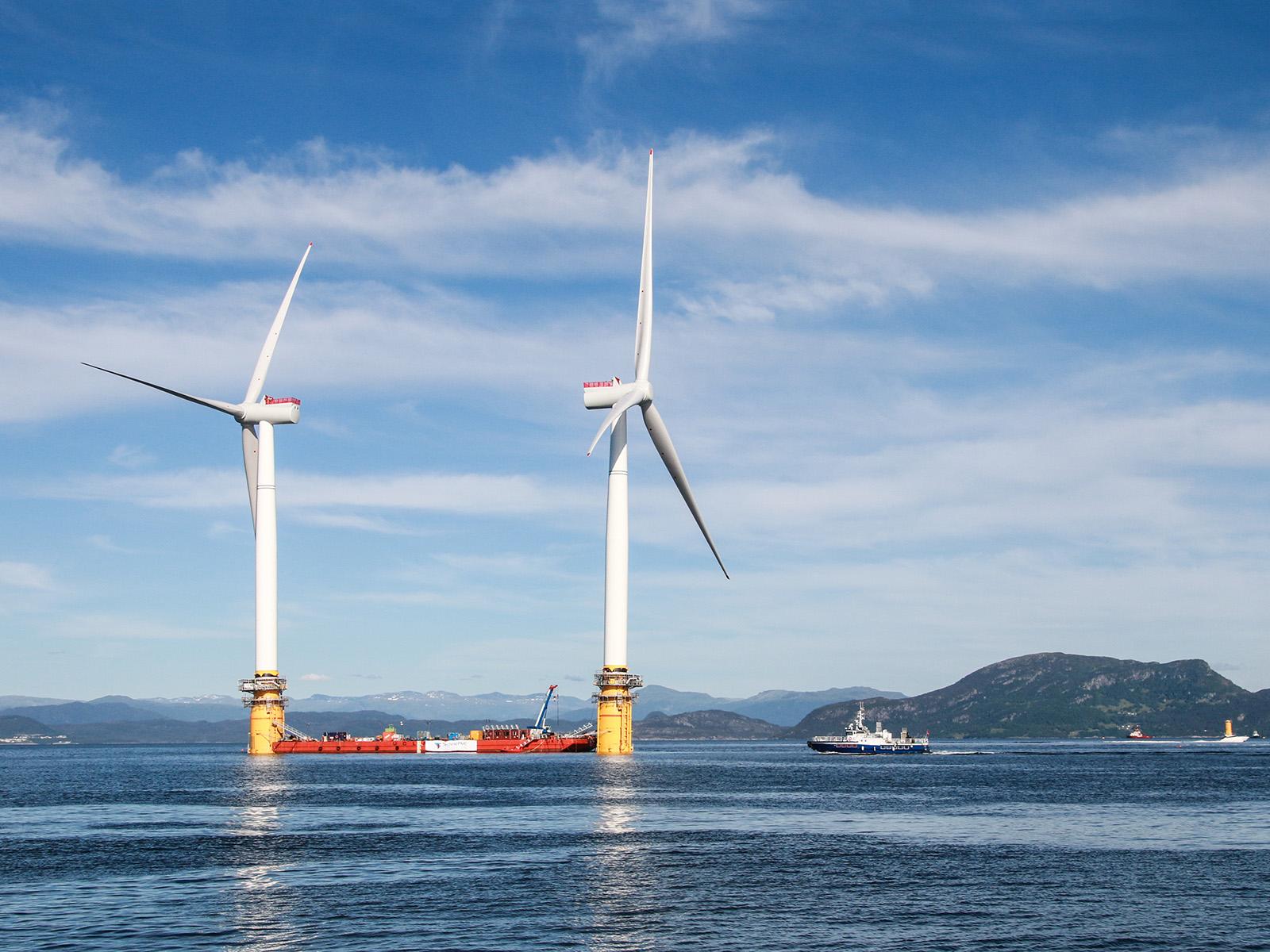 Winds blowing off the Oregon Coast are some of the strongest in the nation, offshore or on land. They hold significant energy potential. Wind researchers at Pacific Northwest National Laboratory (PNNL) are now assessing offshore wind’s ability to provide value—beyond just the electricity that could be produced—to the power system in Oregon and parts of other western states.

Offshore wind power is in its infancy in the United States with just two systems off the Eastern Seaboard. There are not any deployed yet off the West Coast, due in part to challenges associated with the deeper waters of the Pacific Ocean, which will require floating, tethered installations, and addressing questions about impacts to sea life and birds.

Even so, PNNL researchers say it’s not too soon to plan if we want to optimize wind energy locations and strategies to bring value to the grid in addition to the electricity they will produce.

“We advocate for a different approach that goes beyond just looking at wind potential and the cheapest cost of energy on a project basis,” said Travis Douville, project manager at PNNL. “We’re asking and answering questions about the overall value of this asset to generation, transmission, and distribution across the entire system. Guided by this value characterization, offshore wind installations can be designed, from the outset, to provide value to the grid.”

A recent study, led by Douville, found that 2 to 3 gigawatts of electricity from winds off the coast of Oregon could be carried by current transmission lines. That’s enough to power up to 1 million homes—a significant number since there are 1.5 million homes in Oregon. But just as significantly, it also means that delivering that power would not require much additional investment in new transmission infrastructure.

“Interconnecting 3 gigawatts from the coast without incurring significant transmission investment represents a huge value in avoided costs over other clean energy development alternatives,” said Douville. “But there are several other benefits to the regional grid that offshore wind can provide.”

The study also found that offshore wind complements other renewable resources in terms of timing, would likely lead to less need for fossil fuel generation, and would open transmission capacity on existing infrastructure to allow additional terrestrial wind and solar power delivery from eastern Oregon and Washington, as well as states further east, like Wyoming and Montana.

PNNL studied the issue for the Bureau of Ocean Energy Management (BOEM)—within the Department of Interior. BOEM is responsible for overseeing offshore renewable energy development in federal waters and is interested in how connecting future electricity produced off the coast of Oregon might affect or benefit the grid.

The team simulated connecting up to 5 gigawatts of offshore wind energy to the Western Interconnection of the electric grid in a detailed model. The model, called a production cost model, considered different generators and their characteristics, including their locations on the system, as well as the operational capacities of transmission lines and substations.

These details, in addition to constraints on the hydropower system in the region, were sourced from regional utilities and hydropower operators. The model showed that offshore wind power, through careful project location and interconnection planning, would displace more fossil fuel power than hydropower, based on generation costs.

Legislation in Oregon, along with neighboring states of Washington and California, is aimed at reducing greenhouse gas emissions, which are produced by thermal generating power plants, like coal and natural gas. In fact, the last coal plant in Oregon was recently closed.

More renewable generation will be needed to meet the clean energy policy goals of Oregon and neighboring states.

“As the portfolio of renewable generation is matured, characteristics of different types of generation should be considered, like when a resource is producing energy and the value the timing provides,” said Douville. “For instance, how it complements, on an hourly basis, other types of variable renewable energy sources and how it complements load.”

The team found that offshore wind synchronizes well with hydropower. Oregon offshore wind generally has higher mean wind speeds than regional terrestrial wind farms, and they are stronger through the late summer months—precisely when there is less water available for hydropower and when operational constraints for fish management are particularly stringent.

The seasonal consistency of offshore wind could help to meet these late summer pinch points and would reserve hydropower to supply a range of balancing, load following, and other grid services.

Oregon offshore wind also would complement other intermittent renewable energy sources—especially wind farms in the Columbia Gorge in the summer and emerging solar installations in central and southern Oregon. Offshore wind may compensate for solar generation in the winter, when the Pacific Northwest sees most significant loads due to heating.

Wind on the wires

The PNNL researchers found that integrating Oregon’s offshore wind to the transmission system would provide a more robust supply of power along the coastal region, while also securing state-wide benefits. Typically, power is produced in the eastern part of the state from hydroelectric dams, terrestrial wind farms, and natural gas plants. It is then sent to western load centers inland and on the coast. Offshore wind generation would serve coastal loads and some loads in the I-5 corridor. Given state clean energy targets, natural gas generation from the East would be displaced and capacity on the existing East-West transmission lines would become available. This transmission capacity could be utilized to import more wind and solar energy produced in eastern Oregon, eastern Washington, Wyoming, and Montana to western load centers. In this way, offshore wind generation could serve coastal loads while also reducing the need for additional transmission investment as the state works to meet its clean energy targets.

PNNL researchers and engineers have worked for decades to increase the resiliency, security, and flexibility of the nation’s power grid. Recognizing and assigning value beyond conventional metrics, like the cost to produce electricity, will help reframe the way that renewables are developed and integrated, leading to a more efficient and lower cost power system.

“This research shows the importance of local and regional grid impacts and benefits in the overall process of planning for offshore wind projects,” said Carl Imhoff, co-lead for the Department of Energy’s Grid Modernization Laboratory Consortium.

An onramp to steadier power flows on the grid

In some regions, the volatility of offshore wind may be less than on land. Offshore wind blows over a relatively flat surface, meaning that the ocean doesn’t have the complex terrain of mountains and valleys that can cause aerodynamic interference with turbines. Thermodynamic stability may also be less variable over deep ocean waters than over land where solar heating plays a more significant role.

PNNL researchers compared offshore wind data off the coast of Oregon and found that it was, indeed, less variable than winds in proximity to some land-based wind farms, which points to the potential for more consistent power supply to regional transmission.

Rapid change in energy output over a short amount of time—called ramping—is one of the challenges of integrating renewable energy into the electrical system. The grid has a hard time dealing with generation that can drop or increase significantly very quickly. Operators must offset these drops with either fast-responding generation, such as natural gas turbines; demand-response programs to quickly drop loads; or strategic investments in transmission and batteries.

In the study, offshore wind energy showed smoother ramp rates compared to those of terrestrial wind resources in Wyoming, where energetic wind speeds lead to low costs of energy at the project scale. However, cost calculations at project level do not account for the additional costs of smoothing generation, painting an inaccurate picture of actual costs. Lower ramp rates mean fewer system resources must be devoted to balancing the variable generation of power, reducing overall energy costs.

The data are available to make smart choices about where and when to develop renewable energy generation to balance and benefit the grid. PNNL is working to quantify that benefit for both wind energy and marine renewable energy. This research is part of PNNL’s broader offshore wind program, which recently launched instrumented research buoys off the coast of California.