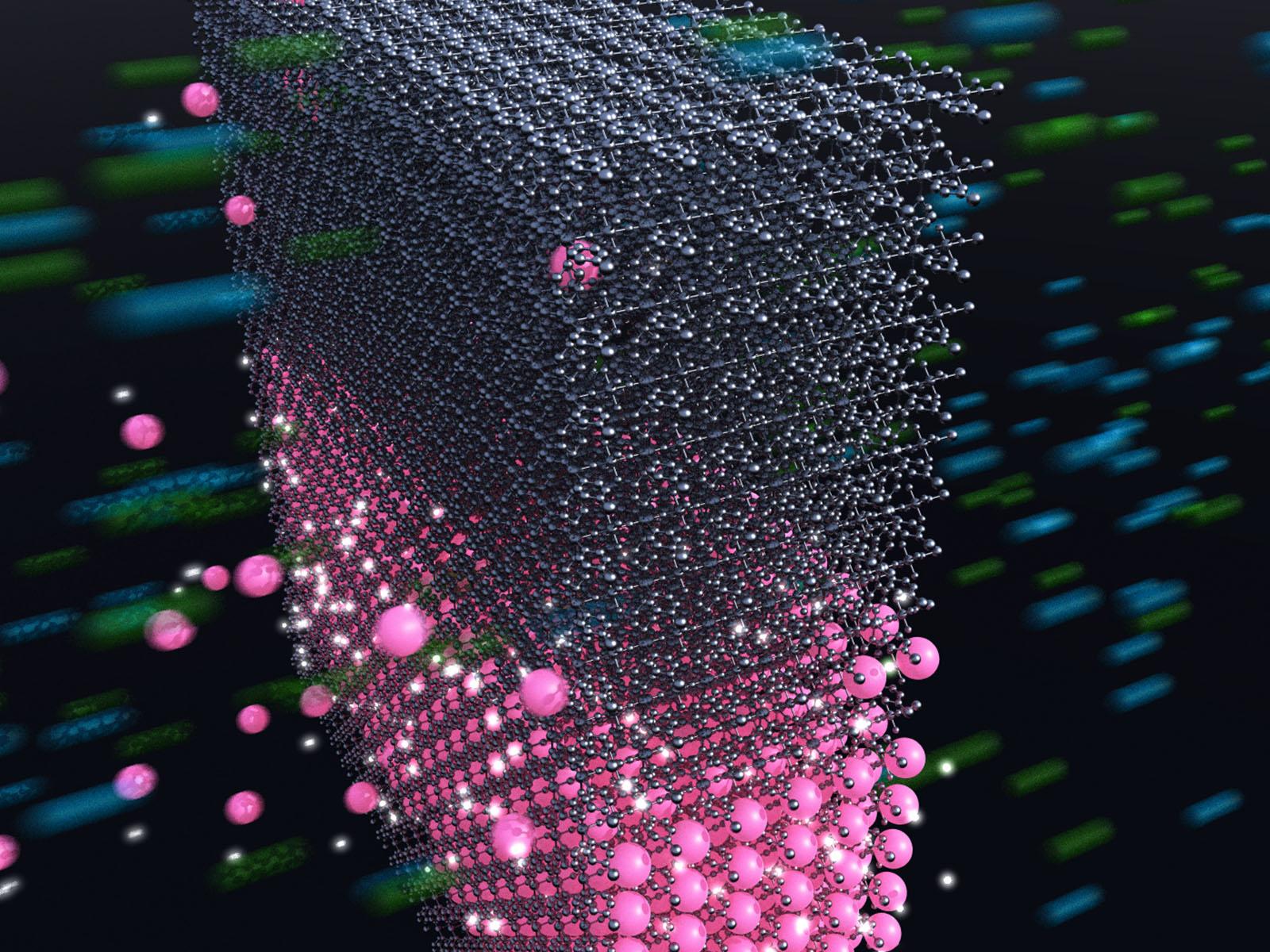 Xenon is trapped in the metal-organic framework (MOF), while other gases go in and out.

Scientists have developed a radiation-resistant material that makes it safer and cheaper to capture radioactive off gases that are generated during the recycling of spent nuclear fuel and the operation of some advanced reactors. Current technologies are expensive, and this new material makes it more efficient to capture noble gasses like xenon and krypton, which are byproducts of nuclear fission. Plus, captured non-radioactive xenon can be repurposed for use in medicine and commercial lighting.

In a recent study funded by the U.S. Department of Energy’s Office of Nuclear Energy, researchers found a more inexpensive way to do it. The international team outlined their findings in Nature Communications.

Efficient capture of noble gases drastically cuts down on the size of the equipment needed and the overall volume that has to be stored until the radioactivity decays. The current, and more expensive, method chills the waste down via a large, costly, and hazardous process called cryogenic separation. The new process can replace cryogenic capture.

“The goal was to recover non-radioactive xenon since it can be used in medical anesthesia, in propulsion engines, and lighting. Even camping headlamps use xenon. So, there’s many uses for it,” said Praveen Thallapally, a materials scientist at Pacific Northwest National Laboratory and one of the lead authors on the study. Unlike xenon, krypton has little commercial value, so the primary goal of separating it is to reduce spent waste storage volume.

In 2016, an international team of researchers developed a material that eliminated the need for cryogenics and reduced gas separation costs by roughly 50 percent. Once the researchers figured out how to capture the xenon and krypton, the next step was to develop a material that could withstand the radiation levels produced by the spent fuel.

In the current study, researchers swapped out different pieces in the structure and made new capture materials that were stable in the radioactive environment. Metal organic framework (MOF) materials are like molecular building blocks made of organic and inorganic materials, such as metals. Simple pieces can be combined to form intricate structures that selectively target capture specific gases. In this study, researchers tested metals, such as zinc, copper, and cobalt to see which combination was more radioactively stable.

“These materials can help to reduce the volume of nuclear waste by separating krypton in a purer form from other non-radioactive gases. However, in order to use these materials for the practical separation of krypton it must be resistant to radiation,” said Sameh Elsaidi of the U.S. Department of Energy’s National Energy Technology Laboratory and co-lead author on the study.

The science is based on the fact that all gases differ in two ways: their stickiness and their size. Scientists use these properties to fine-tune materials that will capture specific gases.

Non-radioactive xenon can be recovered from spent nuclear fuel for use in things like headlamps, commercial lighting, or even in medicine.

Like water flowing through holes in a sponge, MOFs also have a web of cavities for gases to pass through. Researchers can make the holes large or small and can even create MOFs that pick up only certain liquids, such as ones with larger molecules.

This same idea was applied to xenon and krypton in a two-step process to separate the gases. The first step is designed to capture xenon, while the smaller krypton atoms pass through. The second step captures the krypton.

“The radiation resistance of MOFs is essential for its use in krypton separation using the two-bed technique,” said Ju Li, a professor of materials science and engineering at the Massachusetts Institute of Technology and co-lead author on the study.

The specific radiation-resistant MOF developed by the research team, called SIFSIX-3-Cu, has applications in the nuclear industry, along with commercial sectors that work to remove noble gases from air for cleanup purposes or to capture and repurpose xenon.