PNNL expands concept with new projects in Washington and Texas 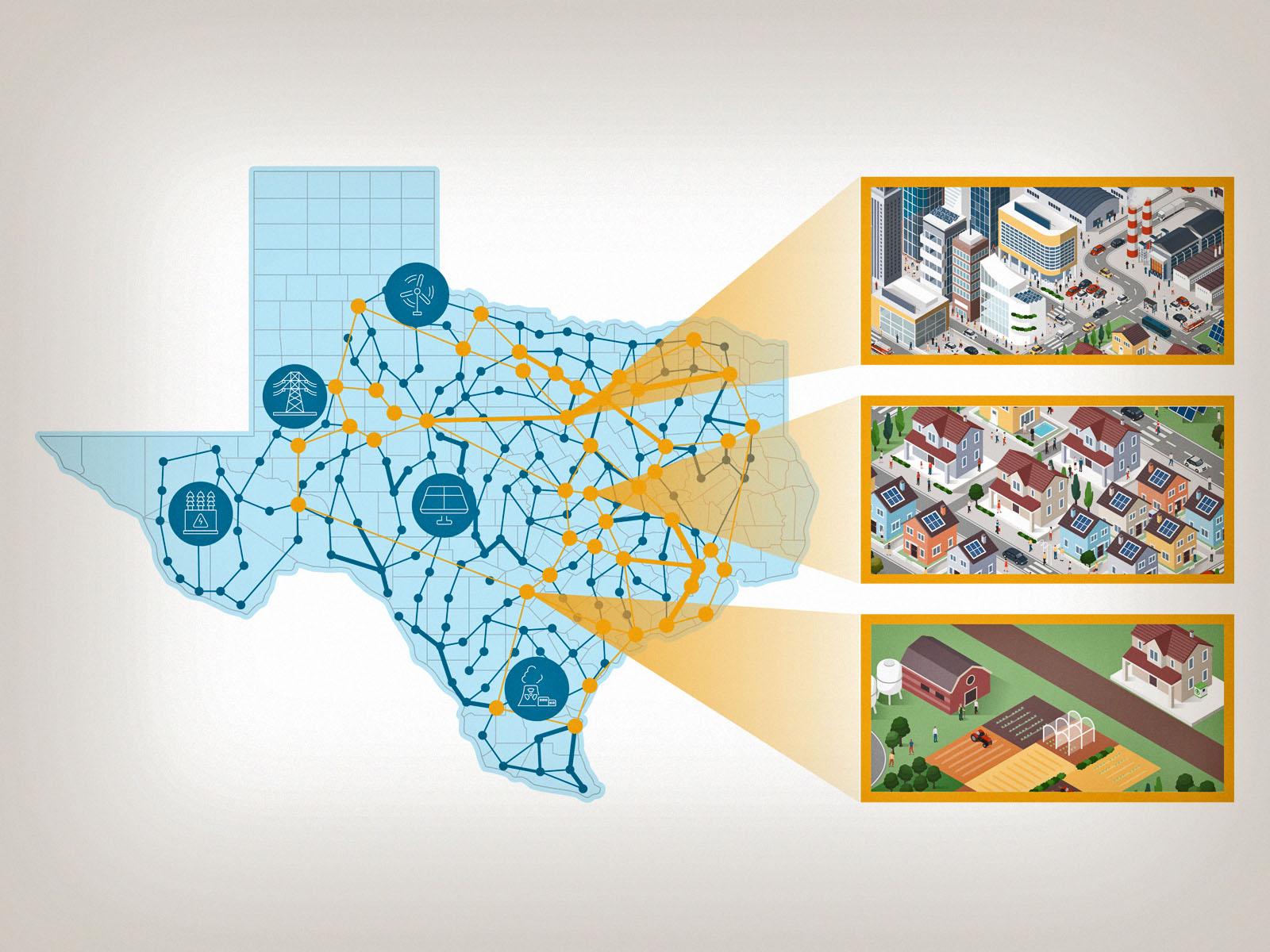 In one of two transactive energy research efforts, Texas’ primary power grid will serve as the basis for exploring how distributed energy resources, such as building loads and electric vehicles, can become more effectively integrated into the electricity distribution system and contribute to grid reliability and resilience.

Two new projects, led by Pacific Northwest National Laboratory (PNNL), are testing transactive methods and moving the nation a step closer to a more cost-effective, clean, and resilient energy system. The separate projects focus on technology deployment in Spokane, Washington, and on simulations of Texas’ primary power grid, operated by the Electric Reliability Council of Texas (ERCOT). The efforts are supported by the U.S. Department of Energy (DOE) Building Technologies Office (BTO) and Office of Electricity (OE), respectively.

Experts at PNNL and DOE believe the world’s future energy system will need the capacity to execute automatic, rapid, and informed transactions between the power grid, homes, and commercial buildings to best balance distributed energy resources (DERs) like intelligent electricity loads, solar panels, batteries, and even electric vehicles. This is part of DOE’s vision for “Connected Communities” of grid-interactive efficient buildings.

A more transactive energy system can generate significant improvements in efficiency, cost, and delivery, as well as environmental benefits from the broader use of intermittent renewable resources. The approach also could substantially reduce the amount of money spent updating and maintaining the nation’s energy infrastructure.

“Getting to the future transactive system will require advanced and automated control and coordination methods to enable the participation of flexible electrical loads,” says Hayden Reeve, PNNL program manager. “Further, customers and society at large must be convinced that they will benefit, and there must be a clear value proposition for grid operators,” he adds.

The effort in Spokane extends transactive energy management techniques developed in the PNNL-led Clean Energy and Transactive Campus (CETC) project to the community’s Eco-District and neighboring structures. Expanded application and testing will further refine the techniques and help formulate a shared-energy model and template that other building owners and communities can use to implement transactive methods.

The project in Texas is a national impact study. It examines how rapidly emerging DERs can become more effectively integrated into the electricity distribution system and contribute to grid reliability and resilience. PNNL researchers are conducting large-scale modeling, simulation, and analysis based on ERCOT’s infrastructure footprint, with results extrapolated to reflect national impact.

The Gridwise Architecture Council (GWAC), formed by DOE in 2004 and composed of electricity industry leaders, developed a definition for transactive energy. GWAC refers to the method as “techniques for managing the generation, consumption, or flow of electric power within an electric power system through the use of economic or market-based constructs while considering grid reliability constraints.”

In lay terms, transactive energy is an intelligent, multi-level communications approach that coordinates the actions of energy suppliers, customers, and delivery resources. As envisioned, the power grid, homes, commercial buildings, and DERs will “talk” to each other. Even smart appliances such as home heat pumps and water heaters will join the conversation. All parties will rapidly negotiate energy procurement and consumption levels, cost, timing, and delivery to create a more efficient market.

Already, various utilities across the country interact with smart appliances in buildings and homes to manage peak energy use. These interactions help mitigate transmission and distribution congestion, which reduces grid stress and improves reliability. But the broader transactive energy vision is more comprehensive, impactful, and daunting.

“PNNL possesses longstanding transactive energy expertise, and over time we have advanced simulation and demonstration capabilities that are now being applied in these two projects,” Reeve says.

Avista Utilities, based in Spokane, provides electricity and natural gas to hundreds of thousands of customers in four northwestern states. Avista is reimagining the future of energy with its vision to create the five smartest blocks in the world. The cornerstone buildings are Catalyst—one of the most sustainable buildings in North America—and the adjacent Scott Morris Center for Energy Innovation. Both buildings have been designed from the ground up to test an innovative shared-energy model called an “Eco-District,” where a centralized heating, cooling, and electrical system can serve the energy needs of a group of buildings.

The site also includes solar panels, battery and thermal storage, and thousands of sensors throughout the buildings to track conditions in real time. The buildings were designed to interact and “talk” to each other—and to the grid—enabling energy management that maximizes building efficiency, makes the best use of the grid, keeps building occupants comfortable, and enhances energy affordability.

The forward-thinking Eco-District concepts intrigued PNNL’s Srinivas Katipamula, who leads the CETC. “Early on, our goal in CETC was to eventually conduct a broad field test to apply and evaluate some of the transactive and other energy-efficiency technologies we developed and demonstrated,” Katipamula says. “Avista’s Eco-District aligned with DOE and PNNL objectives.”

The CETC effort was jointly sponsored by DOE and a Clean Energy Fund (CEF) research and development award from the Washington State Department of Commerce. Now, working with Avista and McKinstry, a national building design, construction, and operations company, PNNL brings some of its CETC ideas and technologies to a pilot project in the Eco-District buildings, which will challenge the technologies in new ways.

In addition to the Catalyst building and the Morris Center, Katipamula says adjacent retail and institutional buildings will be recruited to participate in the pilot. He plans to test several CETC-developed methods that turn buildings into flexible loads that benefit the grid by shaping and shifting peak electricity demand. The methods include:

Katipamula says PNNL has initiated field work and simulations of grid service use cases that will be deployed in the field, with activities continuing into 2021.

PNNL identified ERCOT as having an ideal infrastructure footprint to support the goals of the grid modeling and simulation study, known as Distribution System Operations Transactive Energy (DSO+T). ERCOT manages the bulk power grid for most of Texas and serves more than 26 million customers. Researchers at PNNL believe the ERCOT system not only enables the modeling and simulation of transactive concepts as they relate to DERs, but the extrapolation of the results and potential economic impacts to the broader U.S. grid and customers.

In addition to DERs, the project models two components not commonly in place today: a Distribution System Operator (DSO)—or the entity that conducts planning and operational functions associated with an electricity distribution system, including DER coordination—and a transactive network for realizing that coordination. The network is designed to enable engagement of the DSO and DERs under a variety of scenarios.

PNNL researchers are running simulations of the engagement, collecting data, and performing analyses. They are studying the resulting engineering and economic performance and identifying effective methods to provide economic benefits to grid operators and customers.

“We are looking at participation of DERs from two perspectives: What we would see with an amount of renewable generation similar to that currently found in the Western U.S., as well as much higher levels, which would provide an idea of what’s possible if trends toward higher levels continue,” says Rob Pratt, a PNNL engineer.

PNNL researchers have created sophisticated tools to inform model development for the study. The models are unprecedented in terms of detail, scale, and fidelity and will help reflect the impact and value that transactive capabilities could bring to the power grid in the areas of performance, energy costs, and infrastructure investments.

Researchers expect to gain insights on the value of improved coordination between a DSO and DERs, informing two key products—a DSO business framework and a compatible, field-ready transactive network design for coordinating DERs. Both products will enable and encourage expanded testing of the concepts by industry and research institutions in simulations and the field.

“The results of this work should help advance transactive energy methods and convey a sense of the potential value for the nation,” Pratt says.

Olympic Peninsula GridWise Demonstration – Initiated in 2006, the project tested energy pricing in 100 homes and was one of the first efforts to provide and have loads respond automatically to pricing data on a very short timescale.

Pacific Northwest Smart Grid Demonstration Project – The five-year demonstration led by Battelle, operator of PNNL, began in 2010 and was conducted across five northwest states, involving about 60,000 metered customers. The demo contained many key functions of the future smart grid.

AEP-Ohio gridSMART® Demonstration Project – Launched in 2009, this five-year project built and operated an innovative system to engage residential consumers and their end-use resources in a participatory approach to electric system operations. PNNL designed the transactive network and facilitated the development of a Public Utility Commission of Ohio-approved real-time rate used to drive household agent energy use and comfort decisions.