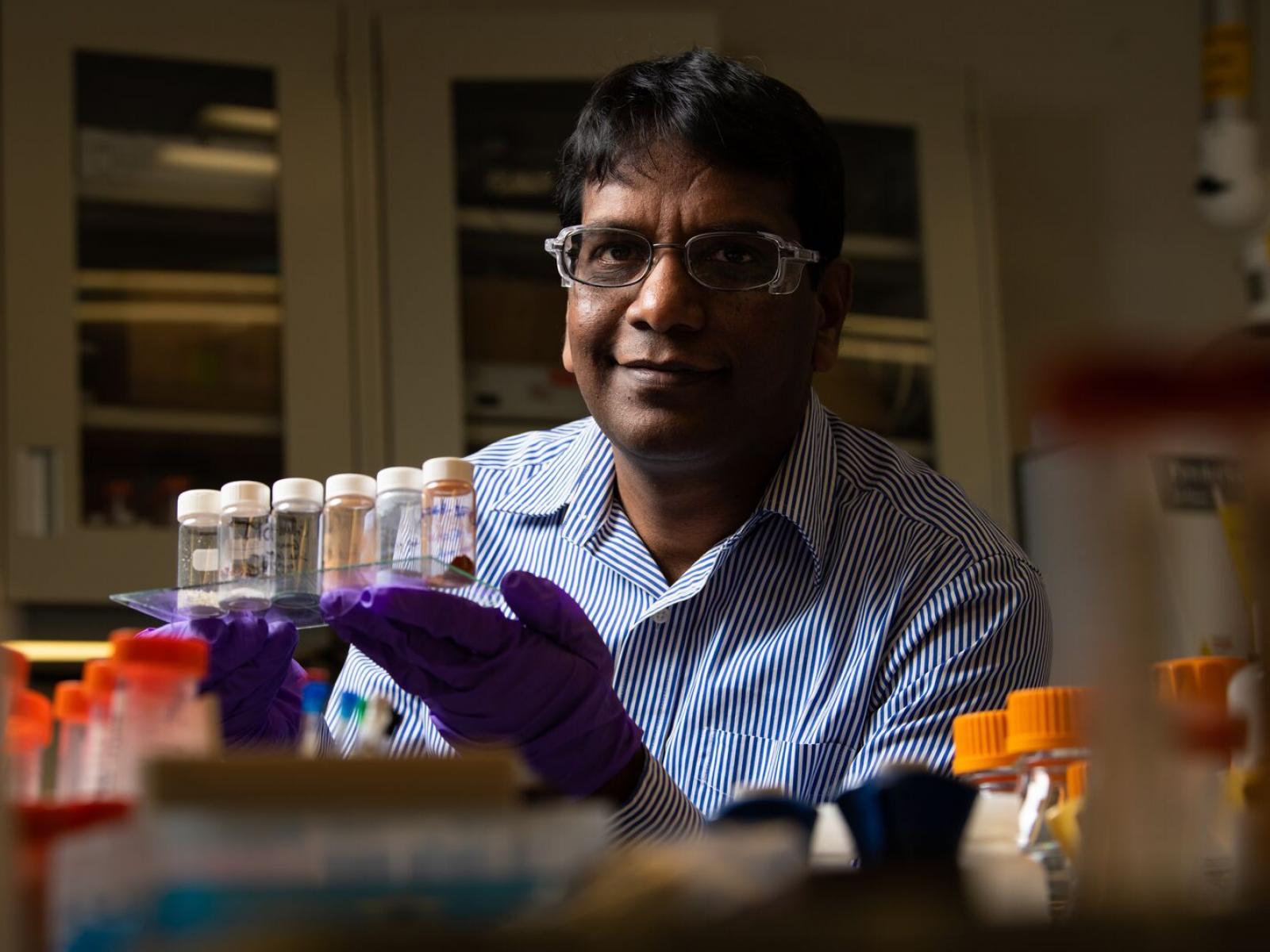 PNNL materials scientist Radha Kishan Motkuri led the study that has been published in the Journal of the American Chemical Society.

Scientists have known for two decades about a more environmentally friendly way to cool large buildings that is less expensive than conventional cooling systems. The challenge has been making those systems efficient for everyday use.

New research at PNNL, however, shows researchers are moving toward perfecting the technique.

The findings, published in the Journal of the American Chemical Society, show the important molecular understanding and interplay of pore-engineering and refrigerant required to create an improved metal-organic framework (MOF) for adsorption cooling. The researchers, led by PNNL materials scientist Radha Kishan Motkuri, reported a dramatic increase—at least 40 percent—in the efficiency of their pore-engineered MOFs. These metal-ion clusters are porous compounds that take advantage of the adsorption and desorption—the attachment and release—of vapor on and from the surface of refrigerants.

Efficient MOF-cooling systems can now be integrated with conventional refrigeration and air conditioning systems because both use the same refrigerants and evaporator/condenser components. The electric-powered compressor can be turned off when heat is available, like from a solar panel or geothermal resource, to run an MOF-based thermal compressor. Sorption-based cooling systems thus could ease the stress on electricity supplies.

The research builds upon PNNL’s 2017 R&D 100 Award Winning MARCool technology. That innovation created a new class of solid-state cooling technology that operates on wasted heat from power sources such as generators that could lead to significant energy and cost savings in homes, buildings, cars, trucks, navy ships, and industrial processes.

The International Energy Agency, the study notes, estimates that climate control units in buildings consume about 20 percent of the world’s electricity. Global energy demand for space cooling is expected to triple that number by 2050.

Researchers at PNNL have made strides engineering MOFs as adsorbents that can adsorb, or "host," certain refrigerants. In the JACS-published study, they tested how the common refrigerant, fluorocarbon R134a, performed at the atomic level with MOFs they manipulated to contain a high pore volume and density of open metal centers.

“By increasing these saturation limits, we allow more ﬂuorocarbon to be taken up by the sorbent per cycle of adsorption and desorption based on speciﬁed chiller process conditions,” said Motkuri, who for the last 10 years has led material development for various fluorocarbon and water-based adsorption cooling systems. “This increased throughput translates to a 400 percent increase in the theoretical working capacity to cycle between adsorption/desorption state points. Ultimately, correlation of its bulk sorption performance under realistic chiller conditions results in modeled cooling capacities for the expanded MOF, Ni-TPM, that are at least 40 percent larger than that of the parent MOF.”

“The study’s researchers embarked to explore which material is the best to pair with the refrigerant to determine the most efficient MOF performance” said Motkuri. “We are engineering these materials to give a better performance,” he added.