In Search of the Perfect Dynamic Duo for Efficient Cooling 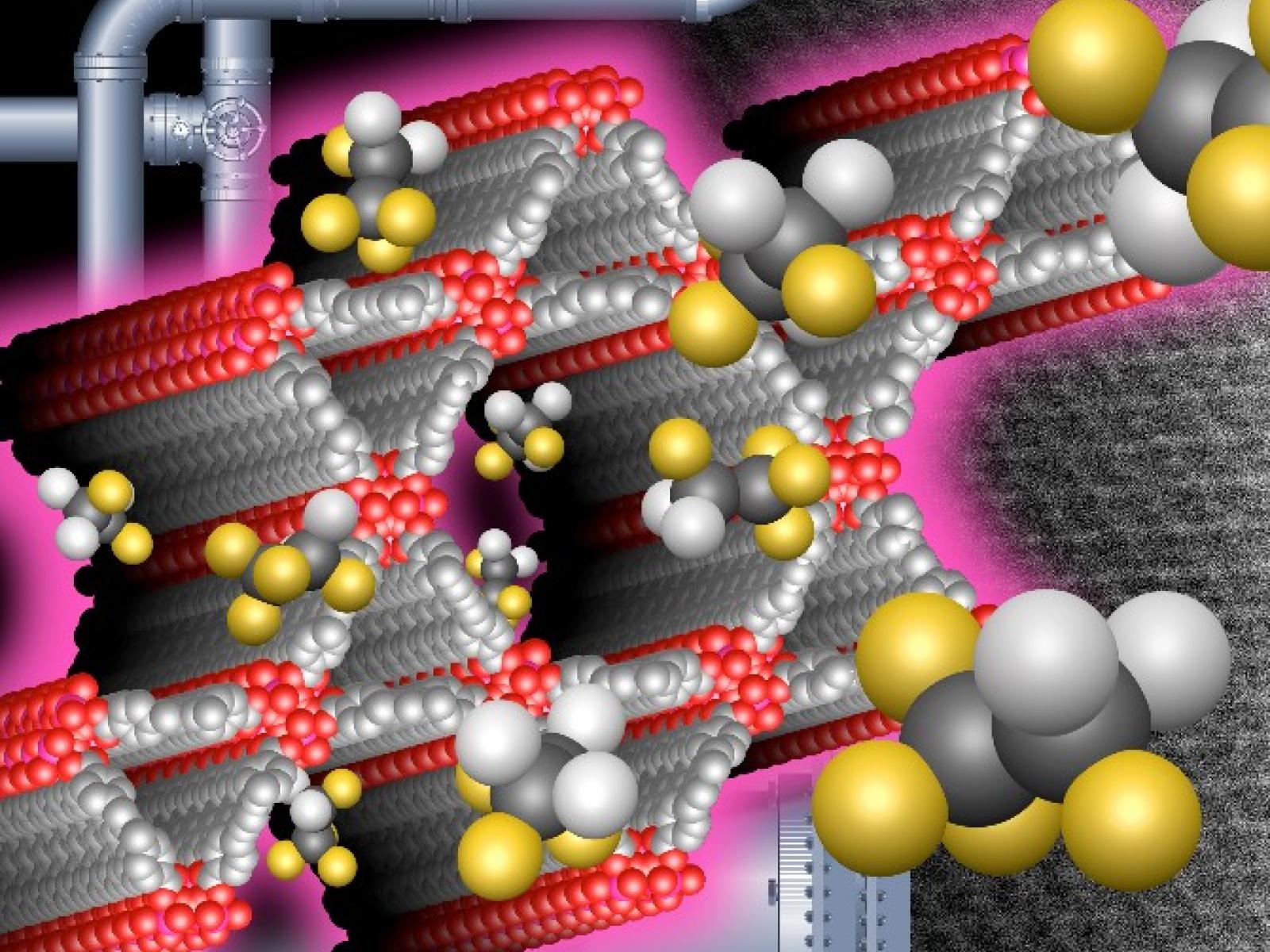 When the weather heats up, so does power demand for air conditioners and refrigerators. But what if you could cool things down by using heat itself instead of electricity? That's the idea behind adsorption cooling, which does its job without a power-hungry compressor. PNNL researchers and their collaborators are developing new materials that can boost the efficiency of these systems.

Adsorption cooling systems depend on a solid adsorbent and a refrigerant, which transform heat into energy for cooling when they interact. This process can be driven by waste heat from an industrial plant, for example, or heat from the sun, but the compatibility of the adsorbent and refrigerant influences how well it works.

Researchers at PNNL have already made strides engineering adsorbents from metal-organic frameworks (MOFs), porous compounds that can adsorb, or "host," certain refrigerants. Now, for the first time, they have tested a series of MOFs to see how well they pair with a common refrigerant, the fluorocarbon R134a, reporting adsorption levels among the highest seen yet. The results are detailed in "Exceptional Fluorocarbon Uptake with Mesoporous Metal−Organic Frameworks for Adsorption-Based Cooling Systems," which was recently published in the journal ACS Applied Energy Materials.

MOFs, which are nanoporous structures, work as adsorbents by attracting refrigerant molecules to the surfaces lining internal pores.

“The pores can be tuned for size and shape to achieve different results, depending on the application,” said Radha Motkuri, a senior research scientist at PNNL and lead author of the paper. “We are constantly looking for materials that have very high refrigerant capacity and also can be regenerated thousands of times.”

Motkuri worked with a team of researchers affiliated with PNNL, University of Liverpool, Northwestern University, and Technische Universität München.

They tested five types of MOFs. All five displayed very high R134a saturation capabilities, but one in particular—the zirconium-based NU-1000—showed exceptional fluorocarbon uptake, adsorbing 170 percent of its weight, one of the highest values yet seen for MOFs. The results show promise for developing smaller cooling units that use less refrigerant, which could help save costs and lower greenhouse gas emissions.

"Higher adsorbing capacity directly translates into a more compact and efficient cooling system," said Pete McGrail, who has led PNNL’s adsorption cooling effort for several years. “This is because the heat exchangers used to construct a ‘thermal compressor,’ the heart of the adsorption cooling system, can be reduced in size and cycled faster due to less structural mass.”

Hydrofluorocarbons such as R134a have replaced chlorofluorocarbons as refrigerants because they do not damage the ozone layer, but they are still potent greenhouse gases. The future of cooling will involve methods that require less energy and alternative refrigerants with minimal greenhouse potential — an important goal, considering global energy demand for air conditioning alone is expected to triple by 2050. Next, the researchers want to test MOFs in a pilot-scale cooling system.

The work was supported through DOE’s Geothermal Technologies Office and the U.S. Military Sealift Command.