On the Surface, Dominant Facets Get More Action 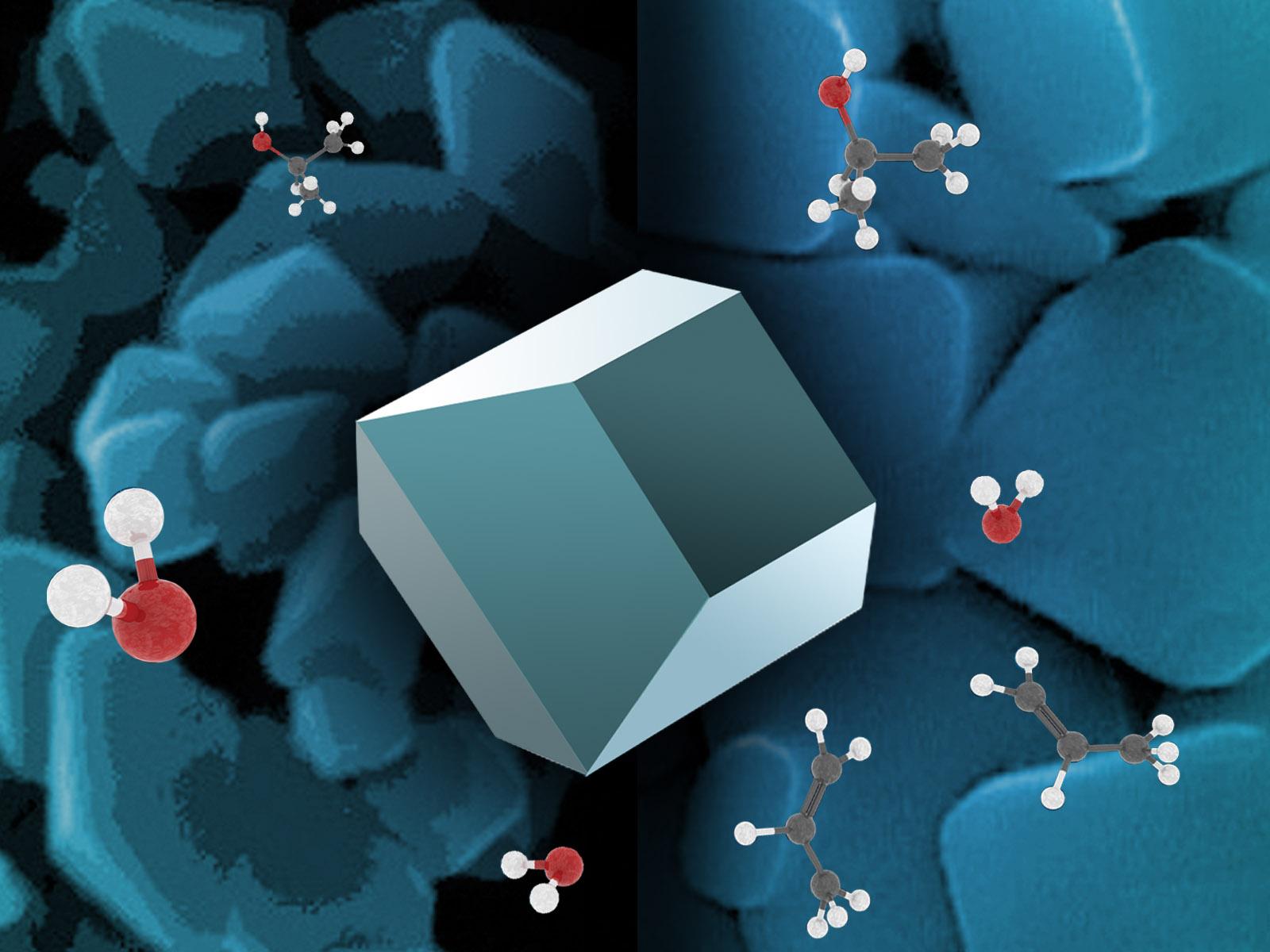 PNNL created anatase crystal samples with pyramidal and sheet-like facets to study the structure and function of dehydration catalysts.

As biomass resources like wood, algae, and even plant waste continue to gain traction as viable options for producing quality fuels and chemicals, the race is on to make the conversion process more efficient and cost effective. Key to biomass conversion processes are the catalysts used to remove problematic oxygen, leaving behind the desired energy-rich hydrocarbon molecules.

New atomic-level research from scientists at PNNL and Washington State University (WSU) sheds light on how certain metal oxide catalysts behave during alkanol dehydration. This class of reactions remove oxygen as a part of water for biomass conversion.

Researchers performed experiments to study the rate of dehydration for 2-propanol using anatase—a crystal form of titanium dioxide—as a model oxide catalyst. Results showed that certain crystal surfaces, or dominant facets, played a key role in how quickly the catalyst removed oxygen to yield an alkene, the desired carbon-based product.

The research, featured on the April 3 cover of ACS Catalysis, is the first to investigate the influence of anatase facets on 2-propanol dehydration reactivity. The study provides fundamental new insights into the relationship between the structure and function of dehydration catalysts. The results inform the design and synthesis of highly active and selective catalysts to convert oxygenates such as alcohols into molecules for more sustainable fuels and chemicals.

The findings add to a growing body of work from PNNL’s Institute for Integrated Catalysis, where researchers are unraveling the molecular transformations needed for a carbon-neutral future.

The goal of most catalytic reactions is to get as much activity as possible out of each catalyst—the most bang for the buck, as it were. Understanding the active sites of metal oxides at an atomic level remains crucial in the design of more effective catalysts for the dehydration step.

But conventional metal oxide catalysts usually pack along a mixture of different phases and exposed facets. The mixture is too cluttered to distinguish fundamental processes at an atomic level.

“Rule number one, we needed a pure surface with a dominant facet in order to attribute all reactivity to that specific facet, without any other contaminants that could complicate the results,” said Huamin Wang, a chemical engineer at PNNL and a co-author on the paper.

As with the clean catalyst, simplicity also guided the team’s choice for the dehydration liquid—2 propanol, commonly known as rubbing alcohol. The simple alcohol minimizes the risk of side reactions, is easy to detect in the reactor, and is similar in structure to other alcohols used for biomass conversion reactions.

Researchers combined kinetic measurements and spectroscopy techniques with computational modeling to study the catalytic reaction on the two materials. Results showed a specific dehydration pathway for both catalyst surfaces but revealed a different surface intermediate.

The anatase 101 facet quickly catalyzed the 2-propanol dehydration reaction via a molecular adsorbed surface intermediate. But for the anatase 001 facet, 2-propanol converted to a more stable 2-propoxide surface species. More energy was required to convert the 2-propoxide and complete the reaction.

“We expected a difference in reaction rate, but didn’t expect 101 to be the more reactive,” said Wang.

Based on the measurements and computational calculations, the researchers concluded that the surface structure of the dominant facets influenced the chemical adsorption properties and therefore the formation of an intermediate.

Results from the study inform the development of selective catalysts and methods to remove oxygen from ethanol, propanol, and other mixed alcohols into precursor compounds for chemicals or fuel. Wang said the research could be expanded to investigate carbon-carbon bond formation reactions to convert small oxygenates into larger fuel-range molecules, such as octane.

“The pairing with surface science can give researchers a molecular-level understanding of the factors that control how a catalyst material functions,” said Wang.

Collaboration and capabilities for catalysis research

The research was supported by the U.S. Department of Energy (DOE), Office of Basic Energy Sciences, Division of Chemical Sciences, Geosciences, and Biosciences. For the study, PNNL researchers performed synthesis and dehydration experiments in laboratories located at the Environmental Molecular Sciences Laboratory (EMSL), a DOE user facility located on the PNNL campus. EMSL provided infrared, scanning and transmission electron microscopy instrumentation, as well as computational capabilities. Additional computation was provided by the National Energy Research Scientific Computing Center and additional measurements were obtained at WSU.