This sensor could be deployed under a Hanford tank in 2019 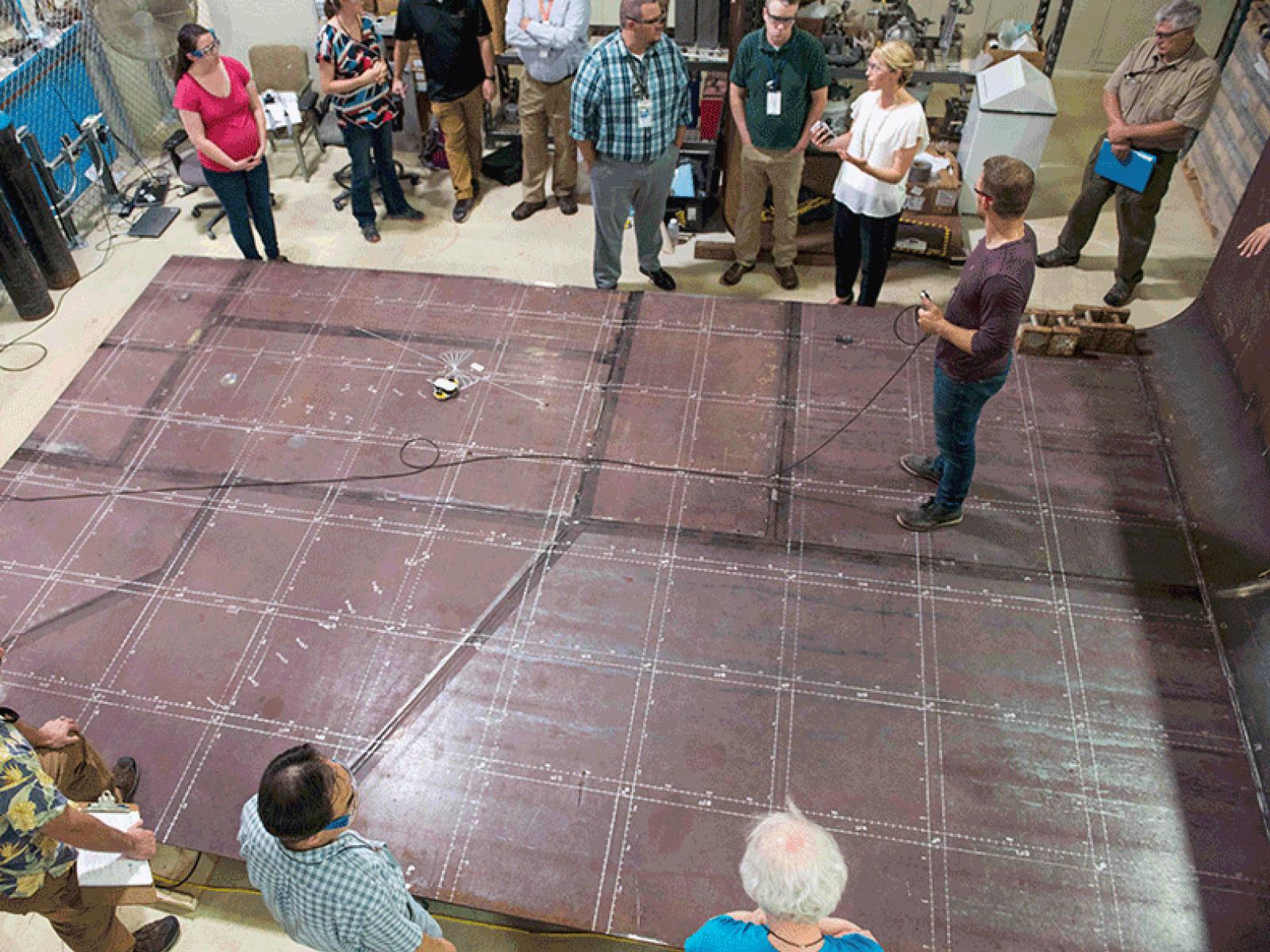 A nondestructive sensor traverses a 12x20 foot mock-up of Hanford tank in a PNNL high bay.

It’s nearly impossible to see the integrity of the metal comprising the bottom of the double-shell waste tanks (DSTs) buried approximately 50 feet underground at the Hanford site; but ‘hearing’ them may help researchers understand how the metal tanks are faring.

A specially designed ultrasonic, nondestructive examination (NDE) technique that uses sound waves to detect small pits or defects will be used for under-tank inspection, which may help prioritize activities involved in managing tank wastes. With this novel sensor technology, it may now be possible to inspect the physically inaccessible tank bottom plates — which has never been possible before because about 90 percent of the tank bottom is blocked by insulating concrete.

Washington River Protection Solutions (WRPS) and researchers at the Pacific Northwest National Laboratory (PNNL) just completed testing of an adapted Ultrasonic Volumetric NDE process on a 12-by-20-foot mock tank bottom. ‘Volumetric’ means the device is able to assess the full half-inch to seven-eighths-inch thickness of the carbon steel plates and welds found at the bottom of underground storage tanks.

The sensor technology was originally developed by a Pennsylvania-based company, Guidedwave, and adapted this year for the tank inspection engineering application. In support of the WRPS DST Integrity Program, PNNL’s non-destructive evaluation experts developed requirements in 2017 needed for a solution that would detect flaws and work in the limited-access air slot space under the primary tank.

“It’s one thing to have an examination sensor, it’s another to have one capable of scanning wide areas from a single location and then modifying it for deployment through small air slots the size of a 3-ounce Dixie cup between the primary and secondary tanks,” said Kayte Denslow, PNNL project manager.

WRPS and PNNL evaluated an initial list of 13 interested technology providers and performed testing to down-select from the final four to the Guidedwave sensor technology. Guidedwave then adapted its technology to meet the conditions and is now putting its new version through its paces at the lab in Richland, Wash. The team intentionally created corrosion pitting, wall thinning and weld seam openings/cracks to see if the sensors would detect them.

“The first adapted sensor performed very well through the air slots,” Denslow said. “They detected the same flaws that were detected last year with their original sensor, which had to be size-reduced to fit in the air channels. Based on the test outcomes, they know what design changes need to be incorporated next year to produce the final sensor that will go under the tanks.

“It will be like having excellent peripheral X-ray vision across large areas of the tank bottom,” she said. “The system was able to detect flaws that represent degradation types of concern for the tanks.”

The sensor remains stationary under the tank, but there are 26 elements within it that go off at different times to activate sound waves. The output is almost like a sonar or radar image — bright colored blips indicate defects, the distance from the sensor and in what direction.

WRPS and PNNL are continuing to work on this Hanford Grand Challenge, teaming with Guidedwave and engineers from nearby Washington State University (WSU) Tri-Cities and a local fabrication firm. The team of WSU Tri-Cities faculty and students are testing one aspect of a small crawler robot that is being engineered by Inuktun to deploy the Guidedwave sensor through the tiny air slots and press it against the tank bottom. HiLine Engineering & Fabrication built the mockup tank bottom used in testing.

“As the tanks go beyond their design lives, these are the kinds of novel yet scientifically supported solutions that we need to help determine the best course of action for these waste tanks,” said Kayle Boomer, Manager of Field Solutions and Technology Management within the WRPS Chief Technology Office. “Whether it’s prevention of degradation, management or potentially even repair, being able to better understand the actual physical condition of the tanks is invaluable to our mission.”

With results in hand, the Ultrasonic Volumetric NDE sensor could be deployed under a Hanford tank as early as 2019.