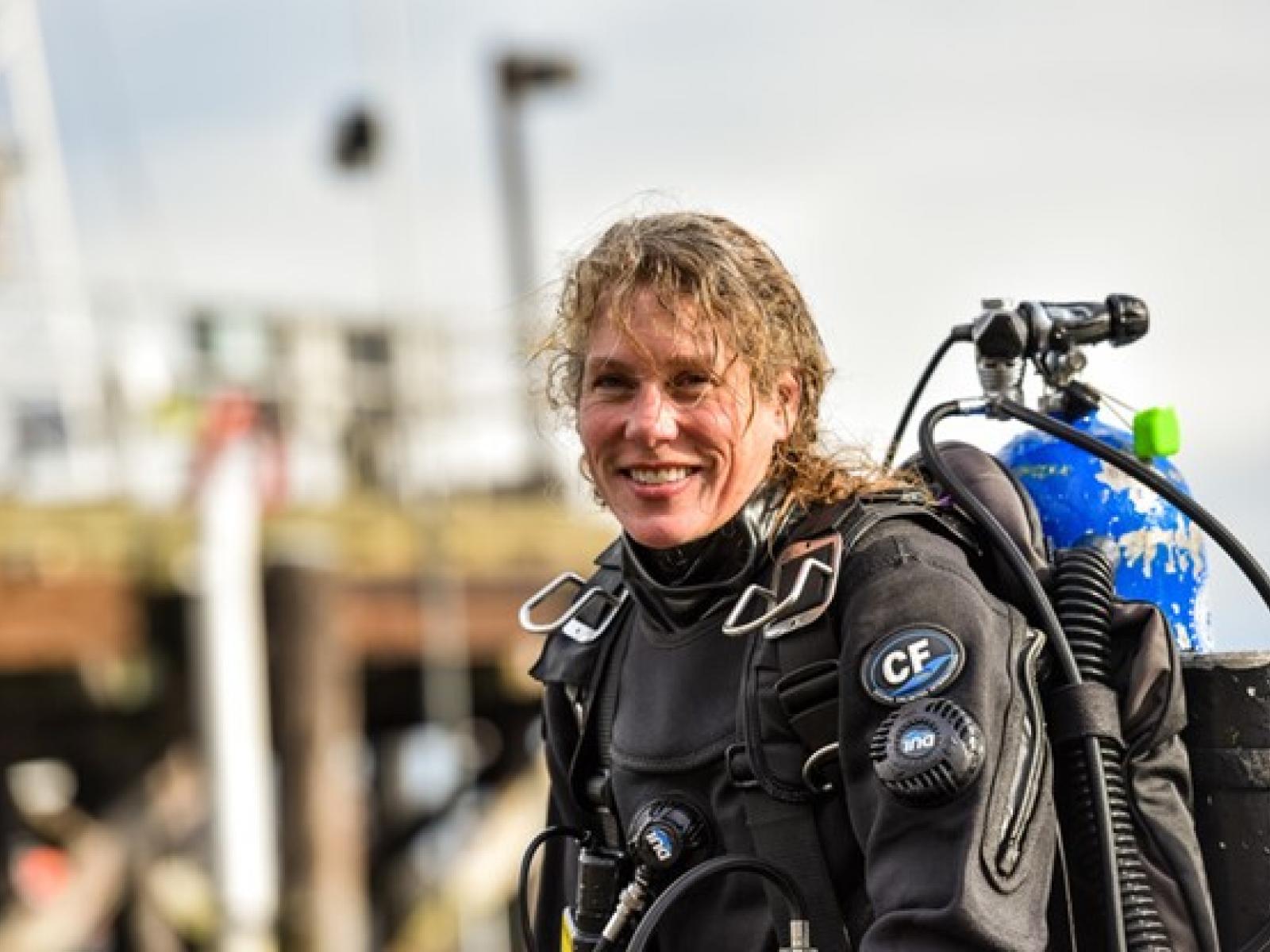 On a chilly day in early February, Sue Southard, the Associate Operations Manager for the Marine and Coastal Research Laboratory (MCRL) at Pacific Northwest National Laboratory(PNNL)-Sequim suited up in her dive gear and held a brief safety discussion with colleagues before plunging into the dark-green waters of Sequim Bay. The descent marked her 1,000th dive as a staff member of PNNL.

Scientific diving in the Pacific Northwest is different from the scuba diving you might do during vacation in warm waters surrounded by tropical marine life. Often, it involves working in strenuous conditions in bulky gear weighing more than 70 lbs. under limited visibility conditions. PNNL divers usually wear dry suits to endure the frigid water temperatures of the Salish Sea. At times reaching depths of 80+ feet, Southard and others on the dive team often work so far below the surface they need a flashlight to perform their tasks.

As a research diver, her job is to collect data and help advance experiments related to environmental protection, sustainable energy, national security, and more.

The start of Southard’s day is typical to most other professionals. In the morning, she might attend meetings, perform some administrative work on her computer or finish up some lab assessments. Then the fun begins as she heads to the locker room to get ready for a dive. Once the boat picks Southard and her crew up, they do a safety check- making sure scuba tanks are full and the air is turned on and the batteries in their dive computers and communications devices are working.

As the boat maneuvers into position, Southard gives her dive buddy a fist bump before they turn around, sit on the ledge of the boat, and do a back roll or giant stride into the water.

“There’s an immediate shock to your system because even with all your gear, some icy water will rush into your hood and gloves,” Southard explained. “Everything becomes muffled except for the whooshing of our breathing and the crackling static of our communication devices.”

While working on projects, such as seagrass restoration or testing equipment designed to monitor marine hydrokinetic devices, Southard stays closer to the surface. But for other projects, such as the support she provided for the Department of Defense for underwater unexploded ordinance, the dives are much deeper, and the pressure is on- literally. For every 10 meters of descent pressure increases by one atmosphere and divers can feel like they are being shrink wrapped.

At the bottom, Southard sets down targets that replicate unburied or buried unexploded ordinance as well as “clutter” that simulates real-life debris, such as boat anchors, cinder blocks, or camping chairs. Then technology remediation developers visit PNNL’s test bed with new technologies designed to try and find them, like a real-life military version of capture the flag. Their results help refine innovations that will eventually facilitate the clean-up of underwater explosives globally before they pose a danger to the public or marine life. Without advanced technologies, this task would be like searching for a needle in a haystack.

On the environmental front, Southard and her team help revitalize native eelgrass populations. The flourishing of these plants helps to stabilize the sediment due to its dense underground root system. It also provides pivotal hiding place and nursery area for juvenile marine life, such as crabs, fish, and other creatures, making it a vital component of a healthy and thriving marine ecosystem.

“One of the coolest parts of my job is going to a region that looks completely barren with nothing but mud or sand to start planting eel grass,” Sue said. “By the time we’re done the crabs and fish are starting to nuzzle in and make their homes here. That does my heart good to know that we changed their habitat for the better.”

Another way Southard’s work supports marine health is through deploying equipment that can monitor the environment around hydrokinetic devices that could help bolster the marine energy industry in an environmentally responsible way. As part of the Triton team, Southard has secured electric cables to the seafloor to test electromagnetic field detection equipment, and helped deploy various marine sensors, such as hydrophone arrays, among other tasks.

Southard has worked for PNNL for over 25 years as a research scientist and operations manager. Her areas of responsibility include training, environmental protection, safety, security planning, operational reviews, and audits. Over the years she has contributed to and helped coordinate large field projects for diverse clients that require complex environmental permitting, safety training, and coordination among many subject matter experts.

Typically, research dive times range from 30-40 minutes to nearly 2 hours, bringing Southard’s total time spent underwater to roughly 750 hours- nearly a month beneath the waves. That is similar to the amount of time most of us would take to gain basic proficiency in a foreign language, learn how to play a new instrument, or take a long exotic vacation. Meanwhile, Southard and her fellow PNNL divers have been using those hours to leave a ripple effect on efforts that keep our ocean healthy, our economy thriving, and our waters safe.