Setting the Stage for Fuel-Efficient Fertilizer 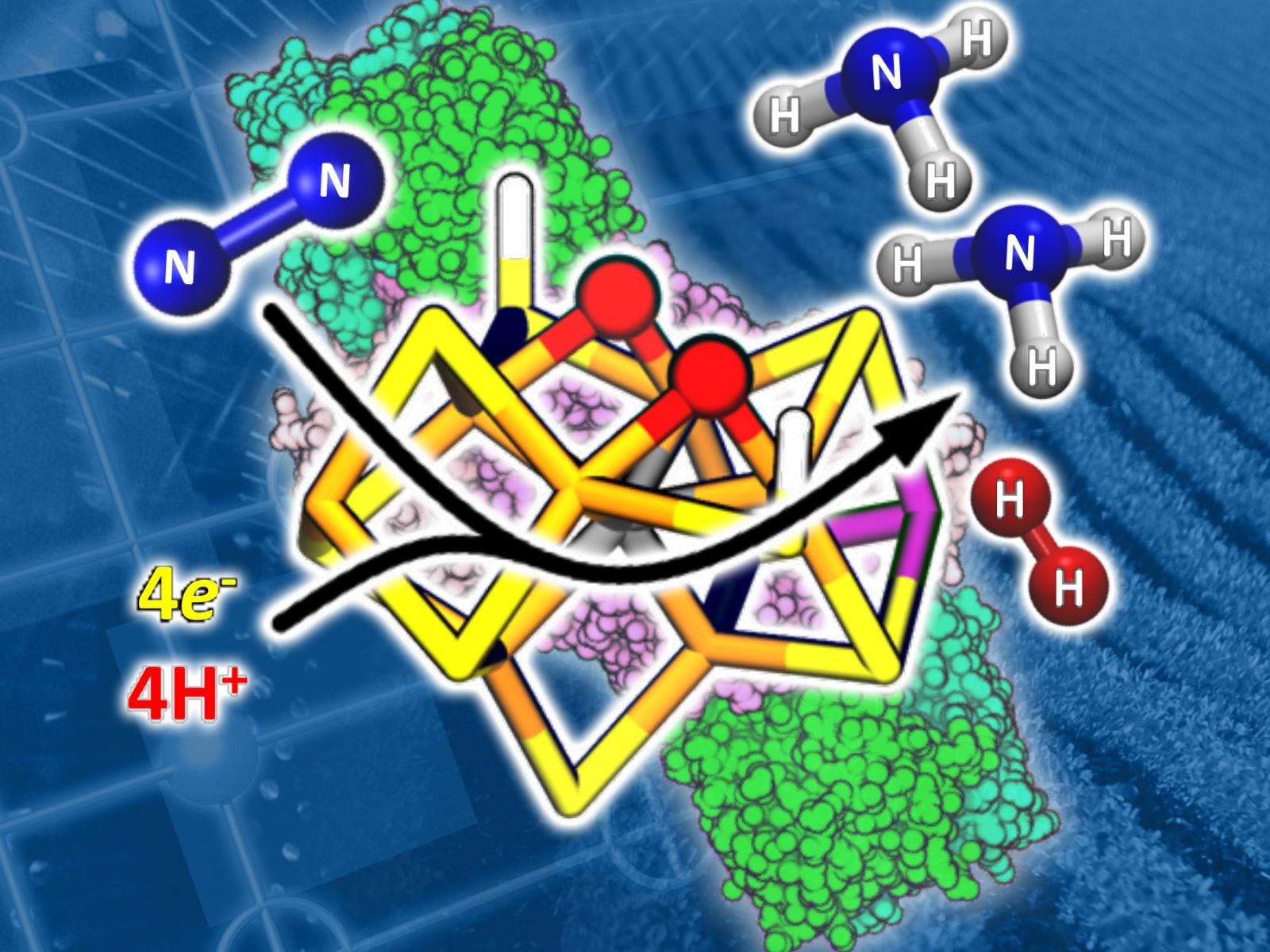 Researchers from PNNL and several universities definitively identified the molecular structure of the Janus intermediate—a key supporting actor in the conversion of nitrogen into ammonia. The structure consists of two hydrides (red spheres) connecting two sets of iron ion pairs (orange rods). It binds a nitrogen molecule while eliminating hydrogen to form ammonia.

Ammonia, the primary ingredient in nitrogen-based fertilizers, has helped feed the world since World War I. But making ammonia at an industrial scale takes a lot of energy, and it accounts for more than one percent of the world’s total energy-related carbon emissions.

In nature, the enzyme nitrogenase produces ammonia in a much more environmentally benign way. Researchers are seeking to better understand how nitrogenase acts as a catalyst to break down nitrogen. What they learn could lead to new bio-inspired designs that improve the way fertilizers are made.

A recent discovery by a research team from PNNL and several universities crosses a huge hurdle toward that goal. They identified, for the first time, the elusive molecular structure inside nitrogenase that breaks down nitrogen to produce ammonia. This structure, referred to as the Janus intermediate, represents the turning point in the nitrogenase path toward ammonia.

The team’s research is described in a research article published in the Journal of the American Chemical Society.

Simone Raugei, a theoretical chemist and one of the study’s corresponding authors, said the structure of the Janus intermediate—particularly the spatial relationships of its electrons and protons — is important because it sheds light on how nitrogenase can store four electrons in a very small cluster of atoms to make breaking the strong chemical bond of nitrogen gas possible. Electrons naturally want to repel each other, so rotating them around in a confined space is tricky.

“Understanding how to park four additional electrons in an already very electron-rich region is a true challenge for synthetic chemists,” said Raugei.

To solve the structure of the Janus intermediate, the research team used computer simulations coupled with a magnetic resonance analytic technique to explain the molecular and electronic structure of the unpaired electrons. The result was a simple, yet robust analytical model able to reproduce the key elements of the interaction between the nuclei and the electron cloud in the Janus intermediate. This model was able to single out unambiguously one structure among all of the possible structural candidates able to reproduce the experimental data. In that model, two negatively charged hydrogens (called hydrides) form bridges with two iron ions to accommodate the extra electrons.

These results represent a tremendous step forward in the quest for a better way to synthesize ammonia. The next step will be to figure out how to tackle how the electrons stored in the bridging hydrides flow into the nitrogen molecule and how its strong triple bond is torn apart.

The full research team included Simone Raugei from PNNL; Lance C. Seefeldt from Utah State University and PNNL; Veronika Hoeke and Brian M. Hoffman from Northwestern University;  Laura Tociu from the University of Chicago; and David A. Case from Rutgers University. The work was supported by the Department of Energy, the National Institutes of Health, and the National Science Foundation.