To increase the efficiency of fuel cells and other electrochemical devices, mix materials science with surface physics, then add spectroscopic approaches 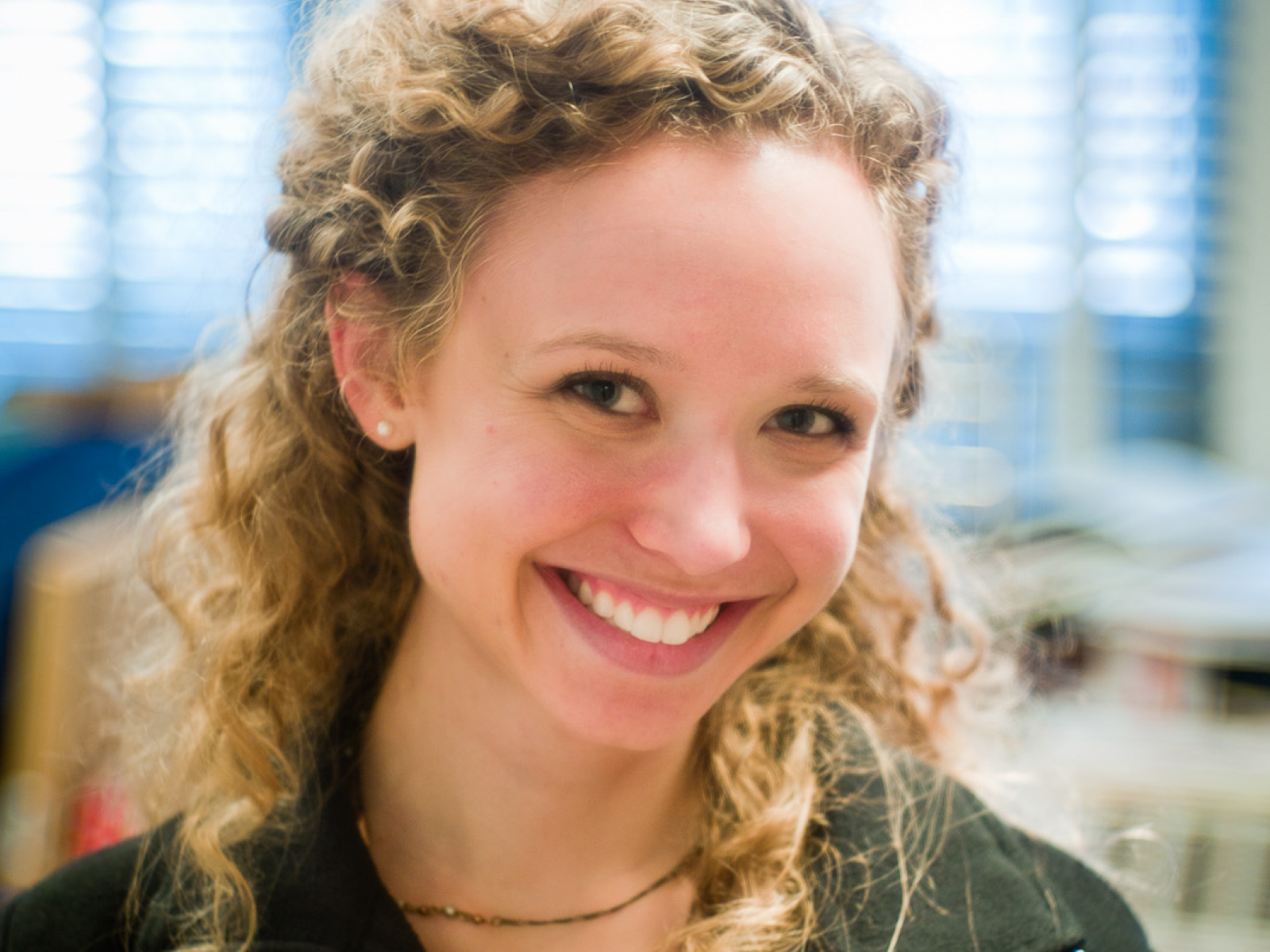 Kelsey Stoerzinger—engineer, researcher, teacher, mentor—is one of more than a hundred researchers who have joint appointments at Pacific Northwest National Laboratory (PNNL).

The onetime college music major—now a rising world star in catalysis and chemistry research—was named a scientist at PNNL in September, and is affiliated with the laboratory's Institute for Integrated Catalysis (IIC). Before then, she had been a Linus Pauling Postdoctoral Fellow at PNNL from 2016 to 2018.

In the same busy month last fall, Stoerzinger was named an assistant professor of chemical engineering at Oregon State University and the university's endowed Callahan Faculty Scholar in Chemical Engineering.

Her joint appointment embodies the ICC mission: Bring in world-class researchers (Stoerzinger is, with more than 2200 citations so far in her brief career, on more than 50 papers); do visionary research (she does, including work on developing carbon energy sources that are renewable or recycled); and value collaboration (which is the soul of a joint appointment).

Joint appointments are "a win-win-win situation for researchers, their projects, and science as a whole," said Stoerzinger. “They leverage strengths and capabilities from other institutions to allow PNNL to make an impact in areas beyond our local expertise—broadening our impact as well as our visibility.”

In particular, her team employs in situ methods to study the role of surface speciation on wetted surfaces that are important for the production and use of renewable fuels. 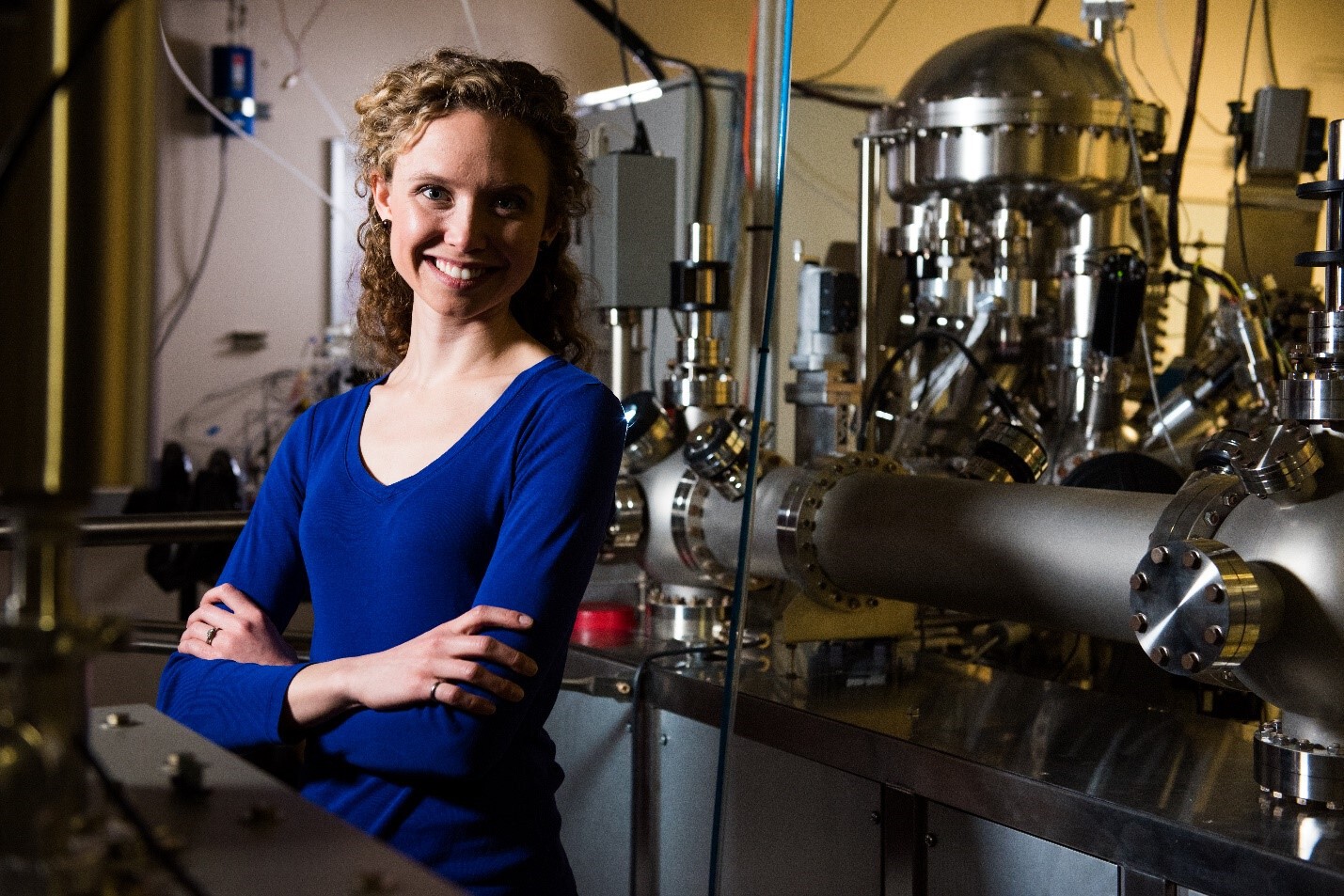 While a Linus Pauling fellow at PNNL, Stoerzinger worked in the epitaxy lab at the Environmental Molecular Sciences Laboratory, measuring the ability of oxides to convert light into chemical energy.

Beginnings, and Women in Science

Soon, however, Stoerzinger was inspired by seeing women behind university lecterns and in research labs and switched her major to engineering. She went on to perform a symphony of nanoscience and nanoscale materials research under the guidance of chemist and materials scientist Teri Odom, including work on surface-enhanced Raman scattering of gold nanopyramidal shells.

At Northwestern, Stoerzinger also started her longtime interest in mentoring, first as a facilitator, and later a senior facilitator, for the freshman course Engineering Analysis with the Gateway Science Workshop.

It was also the beginning of her interest in being a role model for other women in engineering and led her to the Society of Women Engineers (SWE).

Immediately after her stint in a 3M battery lab, Stoerzinger left for the University of Cambridge (M.Phil. in Physics, 2011). She told Northwestern Magazine that what she looked forward to most at the storied English university was getting to use a helium-3 spin-echo spectrometer, a device for measuring nanoscale friction.

While at Cambridge, Stoerzinger worked with physicist Andrew Jardine, focusing on the diffusion of aromatic hydrocarbons on graphene.

After a year at Cambridge, Stoerzinger started a Ph.D. program in materials science and engineering at the Massachusetts Institute of Technology (Ph.D. 2016). Advised by Yang Shao-Horn, she dug further into what had fascinated her for so long: the surface properties and processes that govern the catalytic activity of oxide materials.

“During my Ph.D., I studied the intrinsic activity of model oxide thin films for oxygen electrocatalysis in fuel cells and electrolyzers,” said Stoerzinger. “These studies were the first to probe phenomena challenging to isolate in nanoparticles, such as the role of interfacial charge transfer, oxide conductivity and band structure, strain, and crystallographic orientation.”

She also uses ambient pressure X-ray photoelectron spectroscopy (AP-XPS) to probe the surface species that form in situ when an oxide reacts with water. That led to new insights into the reaction mechanism of oxygen electrocatalysis and wetting.

After arriving at PNNL in 2016, Stoerzinger kept thin films as a central interest. “I developed photoelectrochemical capabilities for testing model oxide thin films in a controlled atmosphere coupled to surface science capabilities,” she said.

Perovskites and Other Targets

Stoerzinger has focused much of her work on materials in the perovskite family, whose name is derived from a calcium titanium oxide mineral. This class of materials exhibits a broad array of tunable composition and properties.

Halide-containing perovskites are widely praised lately in the solar realm for their power-conversion efficiency. However, Stoerzinger studies perovskites that contain oxygen instead of halide.

The physics and surface chemistry of perovskites are still largely unknown—a knowledge gap that she and her team are now part of closing.

More broadly, Stoerzinger is adept at discovering what happens on key surfaces and interfaces. She is now a nationally recognized expert in ambient pressure X-ray photoelectron spectroscopy. She was also the first researcher to consider the hydroxylation and wetting of perovskite electrocatalysts.

Stoerzinger has unlocked fundamental processes that occur on model catalyst systems for oxygen reduction and evolution. This makes it possible to rationally design more active catalysts and to store solar energy as fuel, thus reducing material costs for commercial technologies.

She has established the use of epitaxial oxide films as model systems to quantify intrinsic electrocatalytic activity, decipher the role of charge transfer, and probe the active site for catalysts (including perovskites) that drive the production and use of hydrogen fuel.

Her approach has been adopted and adapted by numerous research groups. Meanwhile, she collaborates with researchers worldwide to understand electrocatalyst surface chemistry.

Her papers have appeared in Nature Chemistry, Nature Materials, and Energy & Environmental Science. She has been cited over 1700 times (more than 750 times in 2018 alone), with an h-index of 21: all just two years after getting her Ph.D.

Read more catalysis news and features in Transformations, the newsletter from PNNL’s Institute for Integrated Catalysis.