It’s not always a party when you’re making bubbles 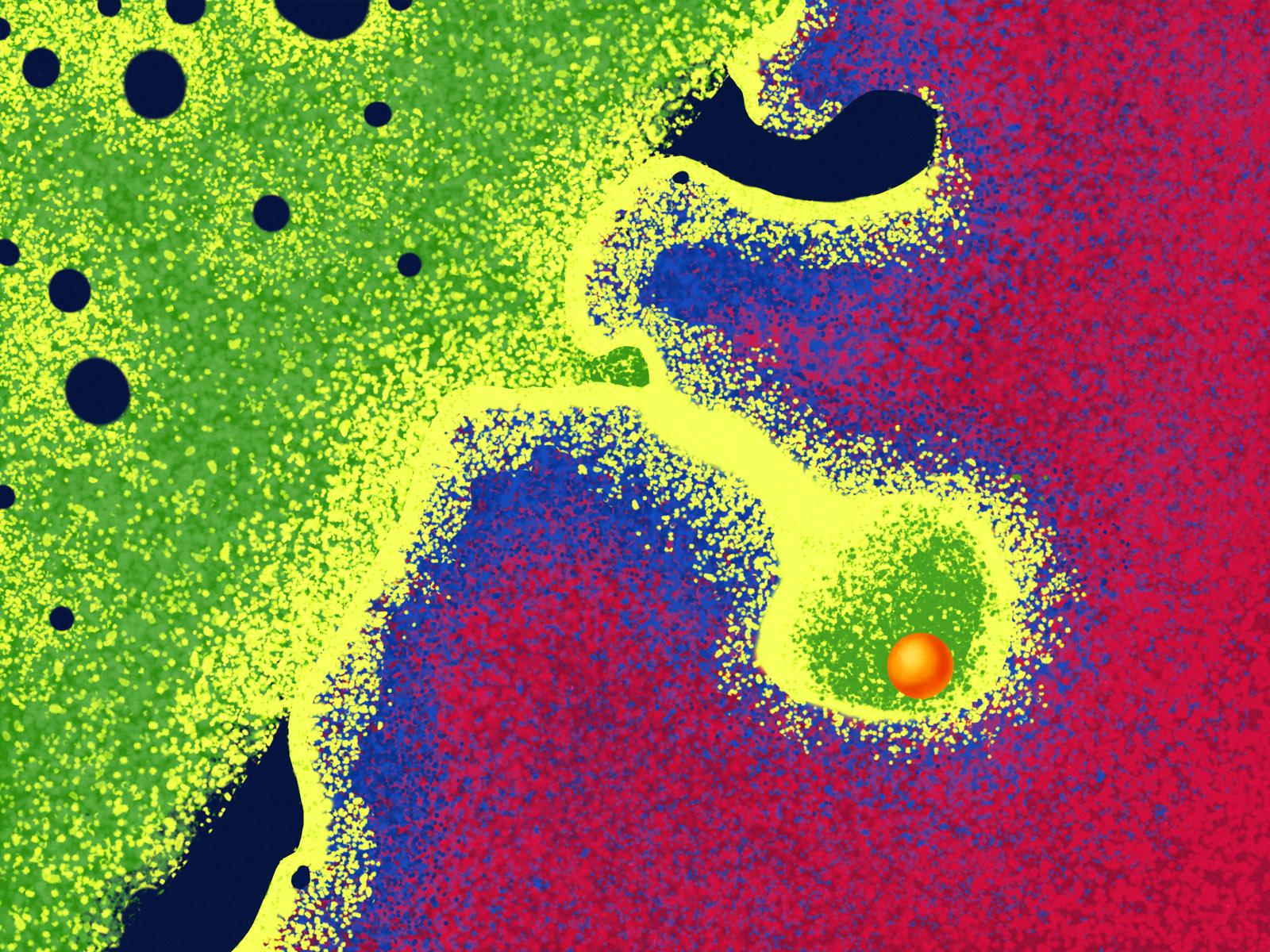 This graphical representation of actual images shows a noble metal phase (NMP) particle (orange) that has been propelled into the zirconium cladding (red). Immediately surrounding the particle are a high concentration of uranium (green), with a trail of uranium (yellow) present at lower concentrations. The graphic was created by PNNL scientific illustrator Rose Perry and appears on the cover of Physical Chemistry Chemical Physics. Image reproduced by permission of Battelle Memorial Institute from Phys. Chem. Chem. Phys., 2020. 22. 6086.

Researchers at PNNL are removing a shroud of mystery surrounding the behavior of certain metal particles in nuclear fuel. The team’s findings could improve future fuel designs for more efficient and safe production of nuclear energy.

In a recent experiment, researchers connected tellurium-containing particles in uranium dioxide fuel to the subsequent formation and rupture of high-pressure gas bubbles. Ruptures can damage the fuel and its protective outer layer known as cladding. The findings are detailed in a research paper featured on the cover of the March 21 edition of Physical Chemistry Chemical Physics.

The team’s experiment was sponsored by PNNL’s Nuclear Process Science Initiative (NPSI). The research is the latest in a series of NPSI-funded inquiries that have produced insights about noble metal phase (NMP) particle behavior in nuclear fuel during reactor operations.

A subsequent study also reported, for the first time, the finding of these particles within the fuel’s zirconium cladding near the interface with the fuel. From this discovery, researchers hypothesized that rupturing gas bubbles were responsible for propelling the particles into the cladding.

From particle to gas bubble

To conduct the latest experiment, the team used a spent fuel sample irradiated in a commercial reactor during the period from 1979 to 1992. They employed various instruments in PNNL’s Radiochemical Processing Laboratory to characterize the sample, including scanning and transmission electron microscopes, both equipped with energy dispersive x-ray spectroscopy.

The team also used the Oak Ridge Isotope Generation and Depletion Code computer program to simulate activation and decay of the tellurium isotopes within NMP particles over time. The researchers then compared these results to experimental measurements they had previously published.

In order to test the hypothesis of bubble rupture, the team used a simple physics continuum model borrowed from the ballistics community. The approach gave an indication of the energy and penetration of a particle when propelled out of the fuel and into the cladding after bubble rupture.

“These results have far-reaching implications on the current understanding of the behavior of fission gas atoms within irradiated nuclear fuel,” Schwantes says. “Our work has shed more light on issues of fuel integrity, fission gas release, and cladding corrosion, while informing the science driving next-generation high burnup fuel designs.”

One more piece of the puzzle

The recent experiment adds to knowledge gained from the multiple NPSI-funded NMP particle inquiries since 2015. In addition to discovering tellurium as a sixth metal and finding particles in cladding, the team’s earlier studies revealed:

These discoveries continue to enhance scientific understanding of NMP particles and their formation, fate, and importance within the nuclear fuel cycle.