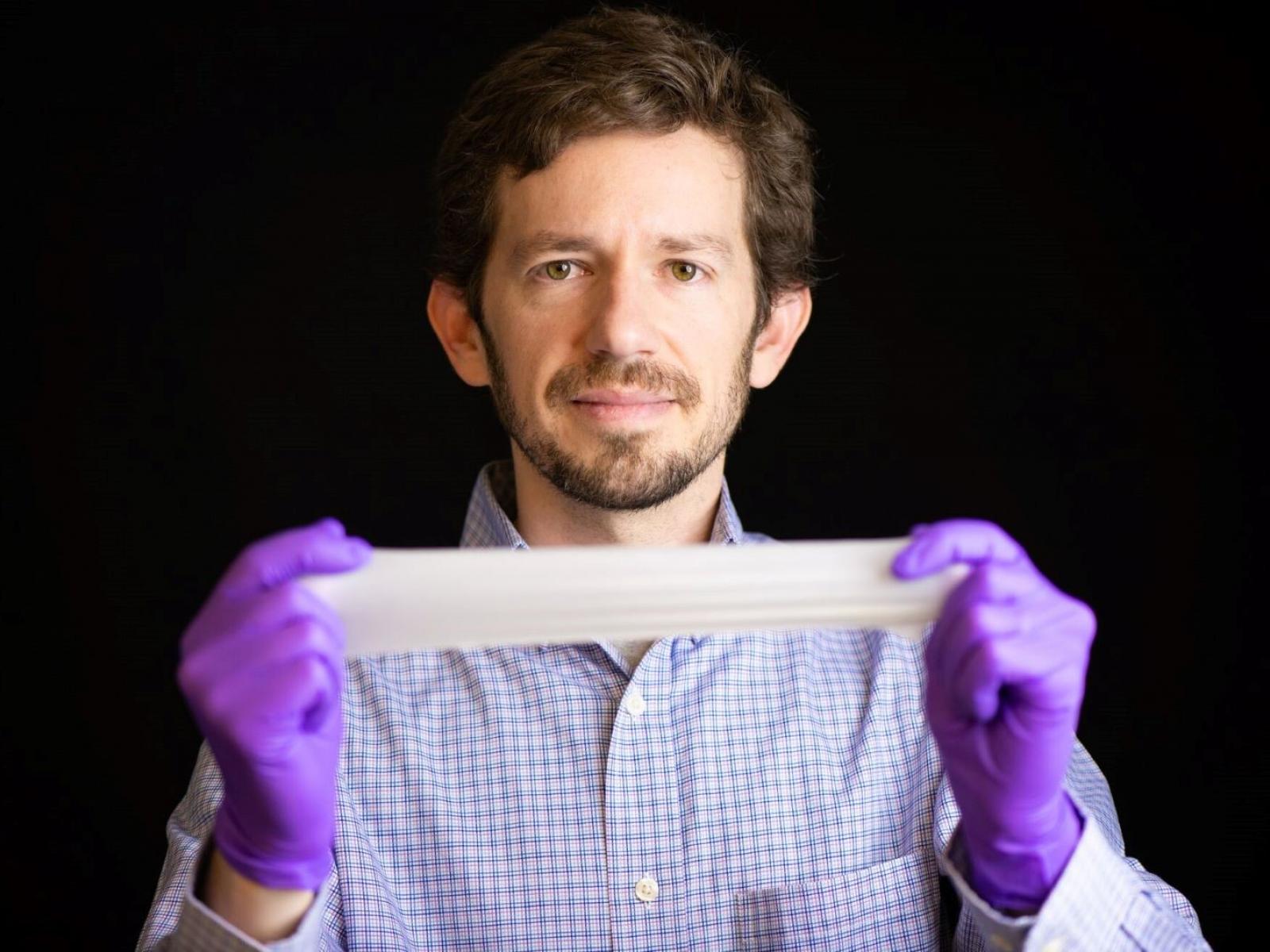 Personal protective equipment (PPE) has been at the center of the fight against COVID-19. Like rarely before, the unforgiving virus has shown medical providers the essential importance of top-line devices.

With this crisis as the backdrop, a super-liquid-repellent substance called ElastiDry may soon be entering the marketplace at a providential time.

PNNL materials scientist Curtis Larimer and his co-workers spent two years researching, testing, and retesting potential coatings before developing the formula and process for application. As they planned, the non-toxic product shed liquids with ease. But to the researchers’ pleasant surprise, it did something completely unexpected: it retained its water-shedding properties, even when stretched. And now, ElastiDry, is ready for market.

Surgical gloves are one of the primary uses Larimer and colleagues envision for their superhydrophobic (“water fearing”) material. The liquid-shedding performance displayed in the laboratory could prevent an infection of a nurse, physician, and others in a health-care setting. Surgical gloves with ElastiDry could provide the extra protection that health-care professionals have sought while guarding themselves against the highly contagious virus.

“One of the things the COVID-19 pandemic has shown is how much our health-care professionals rely on PPE. We designed ElastiDry specifically to address infectious disease outbreaks like this.” - Larimer

About 27 billion disposable gloves are used globally each year, primarily in hospitals and medical settings, food preparation and service industries for chemical handling, and in laboratory research settings. Most of these gloves are used once, and only for a short period of time before disposal.

“Dollar for dollar there’s no better, more valuable, infection control device than the latex glove,” said Larimer. “Medical staff interact with the world, and the patients, and everything with their hands. They’re going to pick up viruses and bacteria and move them around with their hands. Gloves, especially gloves modified to shed liquids easily, are going to disrupt that mode of transport.”

Throughout ElastiDry’s development, Larimer and colleagues saw other potential applications. ElastiDry could be applied on:

In October 2014, the Ebola virus was ravaging parts of West Africa and a handful of cases had been reported in the United States. PNNL officials called an urgent meeting, canvassing researchers for ideas to respond to the often-fatal disease. Larimer, who’d joined the laboratory as postdoctoral fellow, had been working with colleagues to develop slippery coatings.

After that meeting, he envisioned a super-slick surgical glove, inspired in part by his wife, Francisca Larimer.

Francisca had worked for years as a registered nurse before becoming a stay-at-home mother, caring for the couple’s two children. She had been following Ebola news closely, concerned about its lethality to patients and its potential harm to her health care colleagues on the front lines.

“I told him it was a great idea,” she recalled. “I could really see the potential benefits. I told him, ‘You gotta make that.’”

With seed funding from PNNL’s Office of Technology Deployment and Outreach, Larimer launched into the project in late 2014.

Water repellent examples in nature influenced Larimer, such as the back of the Namib Desert beetle, the legs of the Gerridae water strider and, most importantly, the nanoscale texture of a lotus leaf. Intrigued with the way water droplets beaded on its leaves, Larimer purchased a lotus plant at a local garden shop to assist in laboratory testing.

He built his water-shedding idea on previous theories of repellency. In 1805, Thomas Young explored the relationship between a liquid and flat surface; in 1936, Thomas Wenzel developed an equation illustrating the relationship between liquids and rough, flat surfaces; and in 1944, researchers A.B.D. Cassie and S. Baxter focused on liquid behavior on surfaces that were rough and had air gaps.

Larimer was interested in creating a hybrid of the Wenzel and Cassie-Baxter formulas to create a material that retained its superhydrophobic properties even when stretched.

To create the new material, Larimer experimented with mixtures containing hydrophobic silica, a microscopic particle derived from sand that’s a common ingredient in a variety of products, including paints, plastics, and coatings.

“We tested dozens of different particles over the course of a year,” said Larimer. “We tested for particle size, for microscopic chain length, for surface chemistry—for all these things.”

Silica resisted mixing with water-based latex emulsions, however. Instead, researchers applied the silica to drying latex with a high-velocity sprayer. They practiced on a latex glove they produced in the laboratory—a process they figured out by watching a YouTube how-to video.

“When the latex glove comes out of a vat, it’s essentially the film it’s going to end up being,” said Larimer. “But it’s still a canvas we can paint on. The idea is that exactly at that point, we step in, bombard the surface with fibers, embedding them. And then we let the whole glove dry and remove it from the mold.”

One of the time-consuming tasks was determining the amount of silica fibers to be dispensed and at what velocity.

Applying on a wet surface was too early; waiting five minutes or more was too much time.

“But there was this sweet spot, in the one to two minutes after it’s been taken out,” Larimer said. “We figured out the timing. And then we did a lot of studies where we changed the concentration of the particles in a solvent.”

The researchers were surprised to find that the super hydrophobicity increased when the material was stretched, which wasn’t expected, and later discovered the increased repellency resulted from a change in the surface’s structure as it is stretched.

The U.S. Patent and Trademark Office approved the ElastiDry patent at about the same time COVID-19 began claiming its first victims in the United States. And Larimer naturally thought of how the superhydrophobic substance could play a timely role in thwarting the pandemic’s impact.

“Our hope is that nurses, doctors, and first responders at the front lines would be able to use ElastiDry to reduce their risks of exposure to the virus.” - Larimer