PNNL's 2019 Science and Technology Highlights Make a Mark. Here are 8 Key Ones 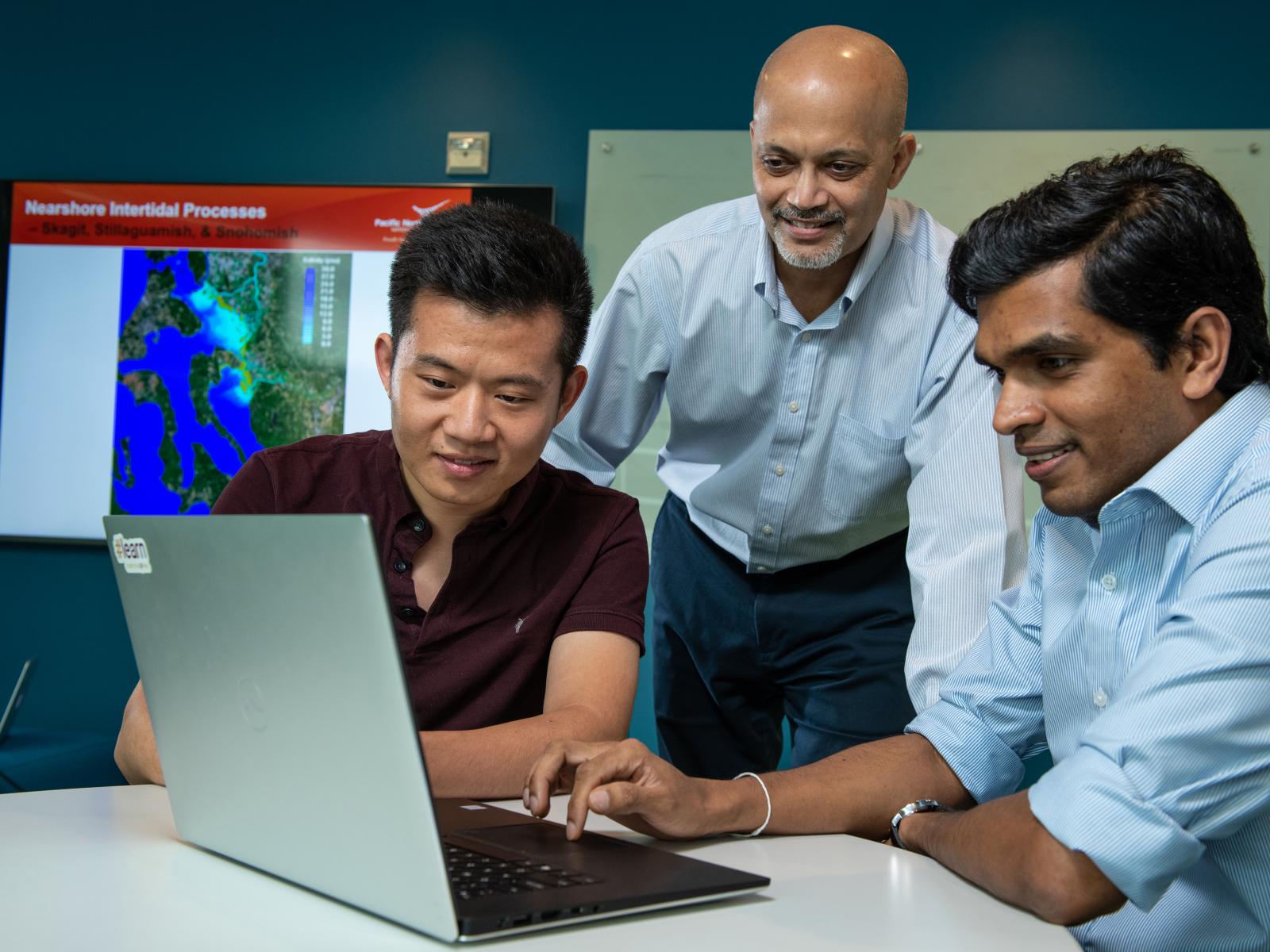 From left, PNNL researchers Wenwei Xu, Tarang Khangaonkar and Lakshitha use a new predictive ocean-modeling tool to study how the Salish Sea will respond to climate change, looking ahead as far as 2095.

Selecting this year's highlights for Pacific Northwest National Laboratory is a bit like choosing just one family photo for the holiday card among the dozens of important events and exciting adventures of the year.

These eight exemplify how researchers at the Department of Energy lab are advancing scientific discovery and finding solutions to the nation's toughest problems in energy resiliency and national security.

Researchers used a new ocean modeling tool to shed light on how the ecology of the Northwest's Salish Sea might respond to increasing temperatures, rising sea levels and growing nutrient loads.

After successfully predicting the biogeochemical cycles of the Salish Sea, researchers applied the model to answer questions about how this body of water will change as the climate changes.

Inspired by the way proteins can mimic the molecular pattern of ice, PNNL researchers and collaborators engineered new proteins and controlled the way they interact with the surface of mica, assembling designer filaments and honeycomb lattices that may lead to new materials for solar cells and electronic circuits.

Two different studies took a closer look at the brain and diseases such as Alzheimer's, Parkinson's and Huntington's.

The first revealed the structure of a fundamental electrical switch in the brain and showed how it fails in diseased brains.

The second used sensitive mass spectrometers to examine a specific protein that may play a role in Alzheimer's and similar diseases.

These tools have been used in more than a dozen natural disasters in the United States in the past two years, including five hurricanes, an earthquake and this spring's upper Midwest flooding.

Shaping the Grid of the Future

Along with industry partner National Grid, PNNL developed a sophisticated model of the electricity distribution system on Nantucket Island to guide investments in energy storage.

This study will be used to build a more reliable and flexible electricity system for the island and its population, which swells five-fold during the summer season.

PNNL scientists concocted a chemical cocktail that yielded an improved electrolyte for use in lithium-ion batteries.

These better batteries will enable electric cars, cell phones and other devices to keep a charge and operate efficiently in extreme temperatures, from minus-40 degrees to greater than 100 degrees Fahrenheit.

PNNL cyber sleuths have borrowed a page from biology to develop a tool that can identify inherited malware in software.

The tool converts software code into DNA-like structures and then examines it for suspicious similarities to known malware, allowing them to pinpoint evolving threats.

Our scientists and engineers invented technologies that "sniff" out vapors from illicit drugs, explosives and chemicals associated with the proliferation of nuclear and chemical weapons.

They can detect and identify trace amounts in the air without swiping a physical sample, which is useful in several settings. One invention was licensed to a company to rapidly detect toxic industrial chemicals in the field.

But I hope it gives you a sense of what some of your friends and neighbors at PNNL worked on in the last year and the great things you can expect of us in 2020 and beyond.