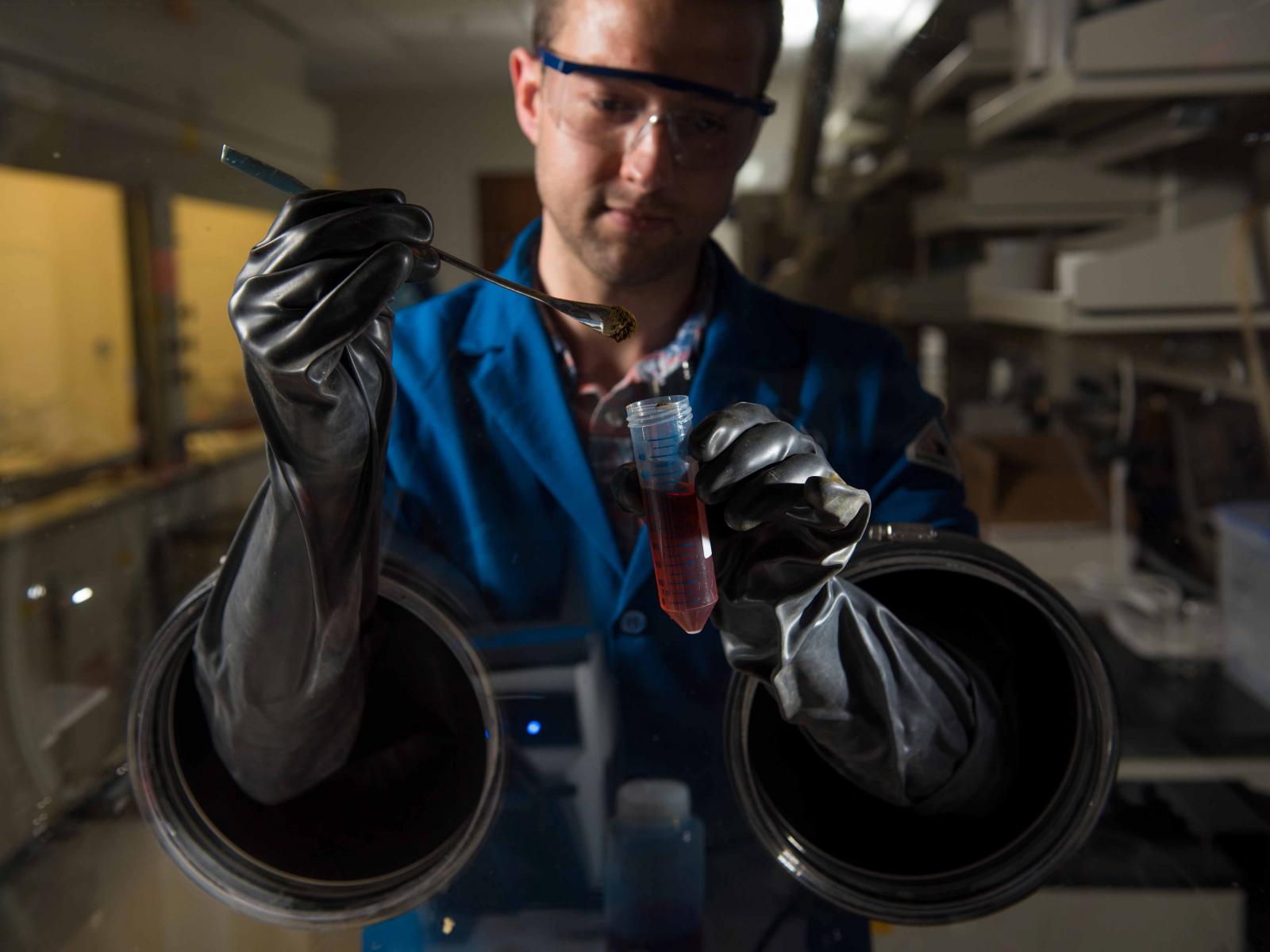 An organic molecule used in dyes and antibiotics may be the key to less expensive, more efficient redox flow batteries. Aaron Hollas and his colleagues at PNNL developed a highly reversible, water soluble organic compound. The new material could serve as an alternative to vanadium, which is used in grid-scale batteries to store electricity.

We rely on batteries more than ever to power our lives.

Growing up, my parents' biggest concern was having enough C and D batteries for new toys on Christmas morning.

In the area of grid-scale energy storage, PNNL has long been an innovation leader.

Today, we worry more about how long our cell phones will last or how far our electric cars will go on a single charge. And utilities are deploying boxcar-sized batteries for the electric grid, aiding with emergency backup and the incorporation of intermittent renewable energy sources, like solar and wind.

Researchers at the Department of Energy's Pacific Northwest National Laboratory are working to invent new battery technologies across these applications. They are drawing upon their expertise in chemistry and materials sciences to develop batteries that will be less expensive and last longer, with increased reliability and safety. These researchers are international leaders in their field, publishing more than 400 peer-reviewed papers and receiving 45 U.S. patents during the past decade.

PNNL researchers and their collaborators use some of the most advanced microscopy in the world to guide their investigations. For example, they used Transmission Electron Microscopy to peer inside a battery during the charging cycle to study how defects form on the electrode. This work shed light on why batteries short (which can cause a fire) or fail to keep a charge after repeated use. As a result, researchers developed new materials that yield batteries that perform much better.

In the area of grid-scale energy storage, PNNL has long been an innovation leader. Unlike consumer applications, where one is willing to pay a premium for a small, power-packed battery, here the emphasis is on cost and longevity. In earlier research, we demonstrated the utility of the element vanadium in redox flow batteries and spun out a company to commercialize the technology. This company, UniEnergy, now employs more than 60 people and sells its products around the world.

Building on that success, PNNL researchers are looking at even cheaper and more efficient alternatives to vanadium. For example, by chemically modifying an organic molecule that is used in dyes and antibiotics, they have produced a material that can replace vanadium at a much lower cost while meeting or exceeding desired performance parameters.

Another important area of research is better batteries for electric vehicles, where the challenge is to increase energy density to improve vehicle range. PNNL leads Battery500, a DOE-sponsored consortium that includes other national labs, universities, Ford, General Motors, Fiat Chrysler, Tesla and IBM. Battery500 focuses on lithium-metal batteries for future electric vehicles, working to make them smaller and lighter so they can drive farther on the same charge. Their goal is a battery that can pack 500 watt- hours of energy for each kilogram of weight — more than double the "specific energy" found in batteries that power today's electric cars — which would allow a car to travel nearly a thousand miles with the same size battery pack.

In one Battery500 project, researchers tested a patent-pending electrolyte developed at PNNL that may significantly increase the life of lithium-metal batteries. Researchers used a special formulation of electrolyte with an optimum amount of lithium salt to reduce the reaction between the solvent and the electrode material that could cause it to degrade. In early tests, an experimental battery cell retained 80 percent of its initial charge after 700 cycles of discharging and recharging, compared to the 100 cycles typical for lithium-metal batteries with a standard electrolyte. Researchers are scaling up the next version for testing in PNNL's Advanced Battery Facility.

From fundamental chemistry to engineering prototypes, in partnership with academic and industrial colleagues, PNNL is working to invent the batteries of the future. We're lowering their costs and increasing efficiency, making it easier for you to talk longer and drive further—but not at the same time!