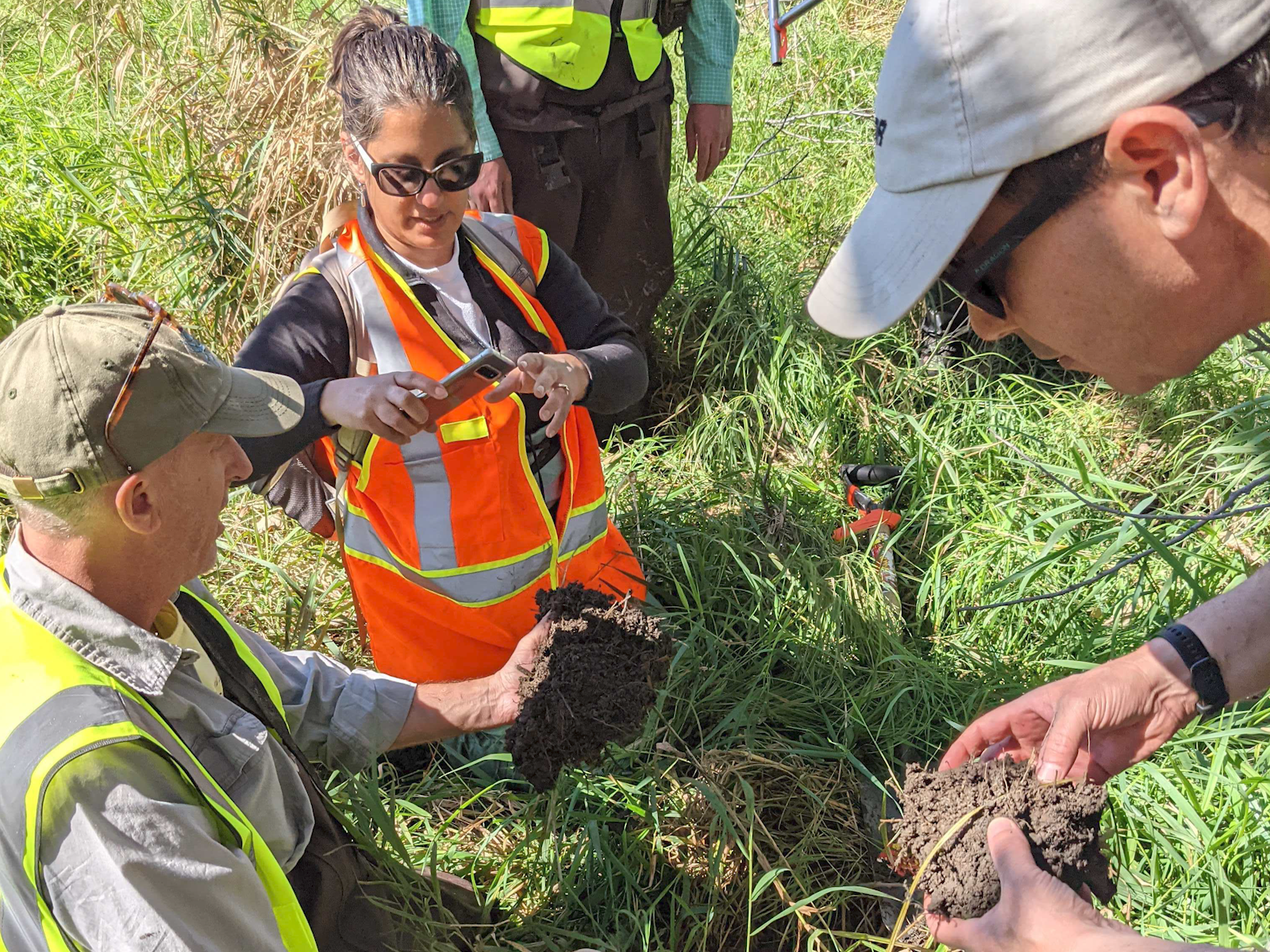 Vanessa Bailey, an Earth scientist at PNNL, (center) is joined in the field by COMPASS collaborators Pat Megonigal of the Smithsonian Environmental Research Center (left) and Mike Weintraub of the University of Toledo as part of a study focused on enhancing the predictive understanding of coastal systems, including their response to short- and long-term changes.

Consider an eerie photograph of a forlorn ghost forest in a marsh where a thriving woodland once stood.

Recall dramatic footage from earlier this year of people in western Washington trapped in their homes as floodwaters raged through once-tranquil neighborhoods.

These jarring images highlight the importance of understanding what happens in nature’s transition zones—areas that can be dry land at times and under water at other times.

The two examples also illustrate how these changes occur over different time scales: decades in some cases, days in others.

Scientists at the Department of Energy’s Pacific Northwest National Laboratory are leading a multi-institution collaboration focused on better understanding the impact that flood events, rising tides and changes in sea levels can have on trees, plants, soil and water.

They hope to learn how and why transition zones shrink and grow in response to natural and man-made events. This information will help us better understand the impact of climate change, as well as guide efforts to protect our forests and homes against storms that can wreak havoc.

Before researchers can understand the fundamental mechanisms that control what happens in these coastal ecosystems, however, they need to study the associated biologic, geologic and chemical systems and collect data at scales ranging from the microscopic level to multi-state regions.

PNNL is doing just that in a set of studies that involves four other national laboratories, two universities and the Smithsonian Environmental Research Center.

The effort, funded by DOE’s Office of Science, is called COMPASS—short for Coastal Observations, Mechanisms and Predictions Across Systems and Scales.

Researchers aim to address the critical knowledge gap about the causes, mechanics and consequences of specific activities in the transition zones, which are also known as coastal terrestrial-aquatic interfaces.

What they learn from similarities and differences in those areas will be applicable around the world, including in the Northwest.

A day in the life of a researcher could involve gathering meteorology data as well as measuring soil conditions, greenhouse gas emissions, groundwater profiles, microbial activity or even collecting information about carbon and nitrogen in plants and sap flow in nearby trees.

The scientists work on laboratory experiments to explore how materials collected in field behave under controlled conditions.

They also conduct large-scale experiments in the field to see how entire ecosystems may respond to change.

One part of the study near the Chesapeake Bay involves purposely inundating land with salt and fresh water to compare the differences between a storm surge and rainfall.

Scientists will take measurements from the dry upland areas to the edge of the wetlands to closely examine the interactions among hydrology, soils and vegetation.

Researchers will develop ways to represent the transformations and exchanges that take place across transition zones in Earth system models.

This data will improve our ability to predict behavior at the interfaces of land and oceans, which is a notable gap in today’s models that focus separately on land, ocean and atmosphere.

COMPASS will deliver a prototype module that can be incorporated into such models and made available to the research community.

Today, scientists are focused on understanding processes; however, their research will eventually have broad societal impacts related to planning and managing these critical areas that are under water at times and dry land at others.