Progress, obstacles, and policy implications for energy, environment, and security discussed at annual meeting of the American Association for the Advancement of Science 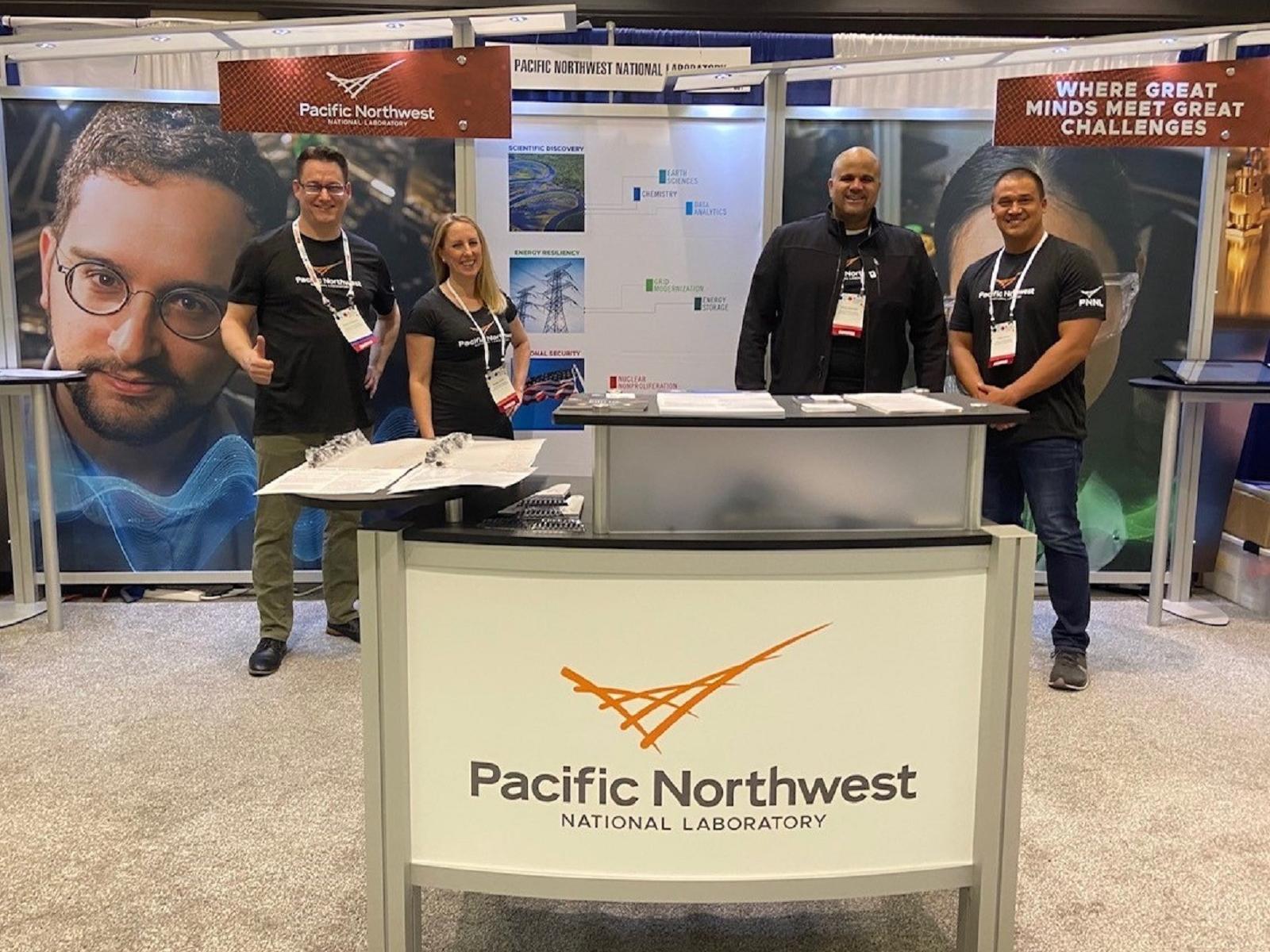 With every generation comes new challenges for our planet. Some issues, like data security, quickly hit home, while others, like climate change, become increasingly urgent with the passing of time.

Under the theme Envisioning Tomorrow’s Earth, PNNL researchers and professional staff recently joined forward thinkers in science, engineering, policy, and education at the annual meeting of the American Association for the Advancement of Science (AAAS), held this year in Seattle. Just 200 miles from PNNL’s main research campus in Richland, the meeting “allowed us to showcase how our multidisciplinary research is addressing important national challenges in energy, security, and the environment,” said Melanie Roberts, PNNL director of state and regional affairs.

Roberts, along with PNNL scientists Ben Bond-Lamberty and Aurora Clark, was recognized at the meeting as part of the new class of 2019 AAAS Fellows. The rank of fellow is the society’s highest honor, awarded to members for their distinguished efforts to advance science or its applications for society.

Throughout the four-day event, PNNL experts led scientific symposia on topics ranging from biothreats and artificial intelligence (AI) to water security and clean energy. Discussions focused on progress and obstacles toward a safer, more secure, and prosperous world.

Detecting biothreats before they spread

Consider the coronavirus and its reach thus far. Today’s connected world, combined with rapid advances in technology, opens the door ever wider—and faster—to new biological threats that outpace our ability to detect them.

A symposium organized by PNNL’s Kristin Omberg and Karen Taylor focused on novel ways to assess the biological landscape for rapid risk profiling and mitigation. The two scientists believe machine learning can connect the functions of different pathogens to help diagnose and prepare for future biological threats.

During the session, PNNL biochemist Katrina Waters talked about the application of machine learning to better understand infection potential and mortality. For diseases such as Ebola, Waters said data can be used to predict whether a patient can be expected to recover without major intervention.

Other speakers included Chris Hassell (presenting remotely) from the U.S. Department of Health and Human Services, Clem Fortman of the Engineering Biology Research Consortium, and Ileana Cristea from Princeton University. The session question and answer was moderated by Omberg.

In the search for better ways to store and generate energy, scientists are taking a hard look at enzymes—nature’s energy converters. Scientists are exploring the essential features of enzymes that allow them to convert abundant raw materials, like carbon dioxide, into useable fuel. Harnessing that knowledge to create industrial-scale synthetic enzymes could help usher in a renewable energy future.

In a session organized by PNNL chemists Wendy Shaw and Aaron Appel and moderated by R. Tom Baker from the University of Ottawa, researchers discussed the key features of enzymes and how those features are being incorporated into artificial enzymes and synthetic catalysts—two variations on the theme of bio-inspired design.

Does it feel like your devices are spying on you? AI and autonomous systems increasingly pervade every aspect of society, from transportation, energy, and medicine to social interactions. While AI offers great promise for efficiency and effectiveness, it can also be exploited.

The discussion included a review of current defensive techniques used to validate and verify the safe performance of AI. The group also discussed safety as a consideration in policies to address the implications of increasing autonomy.

The future of water—feast or famine

Catastrophic wildfires in a parched Australia capped off the globe’s hottest decade on record and directed new attention to humanity’s footprint on our environment. Among the biggest concerns are changes to precipitation and the water cycle. These changes are projected to significantly alter human, animal, and plant communities around the globe.

PNNL Earth scientist and AAAS Fellow Ruby Leung, along with the Department of Energy’s Gary Geernaert, led a discussion about how observational evidence, computer models, and statistical analyses can help predict changes in floods, droughts, and sea level, as well as the socioeconomic drivers and responses that may shape that evolution.

Speaking on behalf of PNNL’s Kate Calvin, Leung also talked about socioeconomics in a connected and evolving climate system. For example, population growth will increase demand for food, energy, and water, while changes in climate could alter the supply of these products. Other speakers included Faisal Hossein from the University of Washington and Robert Kopp of Rutgers University.

Science careers around every corner

When it comes to jobs in science, technology, engineering, and math, or STEM, working for the government may not sound very sexy or be the first thing a college student thinks about. Yet, institutions such as DOE, the National Science Foundation, and the National Institutes of Health take on some of the hardest—and most interesting—challenges in the world.

In a session devoted to careers at the DOE national laboratories, AAAS Fellow Allison Campbell shared what it’s like to work at PNNL. Campbell, who oversees a new coastal and marine science initiative within PNNL’s Earth and Biological Sciences Directorate, spoke about how diversity across scientific disciplines is a key strength for solving wide-ranging problems related to energy, security, and the environment. She also explained how the national laboratories differ from academia and industry, how they support professional development, and how to prepare for a career at a national laboratory.

PNNL’s Roberts took another angle on careers for scientists—state policymaking. State policymakers are on the forefront of decisions about science and technology that can affect people’s lives. Roberts led a discussion with scientists-turned-policymakers about their career paths and how their scientific background influences the way they approach policy.

PNNL joined about three dozen exhibitors on the floor of the event’s Science Expo. Meeting attendees stopped by the PNNL booth to learn more about PNNL’s scientific mission, discoveries, and career opportunities.

Tony Peurrung, deputy director for science and technology at PNNL, kicked off the Expo by leading a panel on science in Washington State. Panelists discussed the region’s thriving research and development ecosystem and record of innovation.

Throughout the meeting, the Expo’s Sci-Mic Studio featured live-streamed interviews, including three with PNNL scientists. Matt Dozier, who produces DOE’s Direct Current podcast, talked with Leung about climate change and with Corley and Kyle Bingman about artificial intelligence. Waters and Omberg talked about biothreats with PNNL’s Nick Hennen for the laboratory’s Pods of Science podcast.

Special events included the two-day, free-to-the-public AAAS Family Science Days, where more than 750 people visited with PNNL STEM Ambassadors Cailene Gunn, Julia Indivero, John Vavrinec III, and Karen Kniep. Gunn and Indivero answered questions like “What determines the color of water?” while Vavrinec III challenged kids to put on scuba gloves and fasten tiny washers and bolts to get a flavor for working underwater. Kniep encouraged kids to test out microscopes, and even provided Smartphone Microscopes—invented at PNNL—as a unique takeaway.