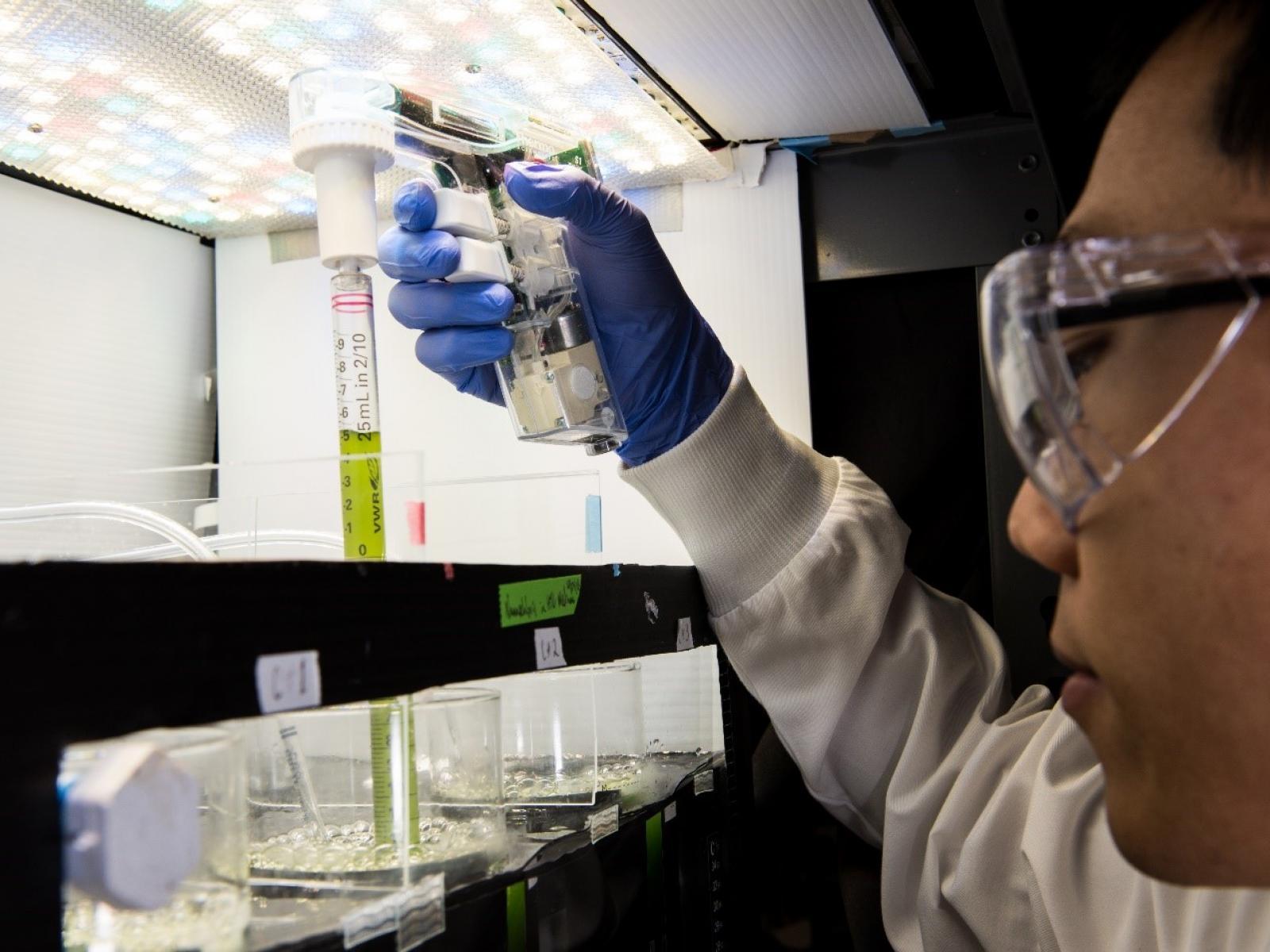 PNNL researcher Song Gao is among the biofuels and biotechnology experts joining forces to investigate algae strains that could lead to sustainable and clean biofuel produced from algae as part of the Development of Integrated Screening, Cultivar Optimization and Verification Research Consortium project - known as DISCOVR.

Algae is often seen as a yucky muck, but it may soon join crop waste and cooking oils as an important ingredient in the recipe for renewable biofuels.

At the Department of Energy's Pacific Northwest National Laboratory, our biofuels research explores many homegrown fuel feedstocks, including algae.

Our scientists are identifying strains that are especially good at converting sunlight and carbon dioxide into biomass rich in energy and storing it in natural oils.

Using a PNNL-developed process, those oils can then be extracted and converted into biocrude oil — a substitute for liquid fossil fuels.

This process is based on hydrothermal liquefaction, which uses high temperature and pressure to make the conversion possible in a matter of minutes versus the millions of years it would take in nature.

Part of algae's promise is its production potential. According to DOE, algae could eventually produce up to 60 times more oil per acre than land-based plants such as canola or soybeans.

Looking to meet industry's needs to maximize production, reduce costs and maintain a steady supply, PNNL leads a consortium that is seeking the most productive algae for a given environment.

This consortium brings together the capabilities and expertise of several national laboratories, including PNNL, Los Alamos, Sandia and the National Renewable Energy Laboratory, in partnership with universities and industry researchers.

With support from DOE's Office of Energy Efficiency and Renewable Energy, the team is testing different algae under various conditions to identify the best strains. They also are looking at ways to increase productivity and develop more energy-efficient practices.

The team's evaluation process begins with studying different strains' tolerance to temperature and salinity in incubators.

To date, the researchers have evaluated more than 50 algae strains obtained from culture collections, universities or commercial companies involved in algae biofuels research.

So far, three strains have emerged as being worthy of further research, with one achieving a DOE target for algae productivity six years ahead of schedule when grown outdoors for an entire growing season.

The multi-laboratory team also cultivated the top winter strain and top summer strain in outdoor ponds in Arizona throughout the year using crop rotation and achieved a 50 percent increase in annual biomass productivity in the last two years.

The ingenuity of our scientists is supported by some unique capabilities at our Marine Sciences Laboratory in Sequim.

These include small-scale, indoor bioreactors where temperature and lighting can be adjusted to mimic the climate and environmental conditions of outdoor algae ponds anywhere in the world.

Using this facility for initial screening is quicker and less expensive than testing all the strains at the outdoor algae testbed at Arizona State University that is used in the final stages of evaluation.

While we are still years away from industrial-scale cultivation plants and commercial biorefineries, this research demonstrates algal biofuels are moving closer to becoming an economically viable alternative to existing fuels.

The team also will focus on making algal biofuels more cost-competitive with liquid fossil fuels so that they can win in the marketplace.

It may be hard to believe that tiny microorganisms - not that different than the green slime one tries to prevent from growing in a swimming pool - may one day fuel our planes, trains and automobiles.

The next time you see some yucky scum, perhaps you will see it in a different light.